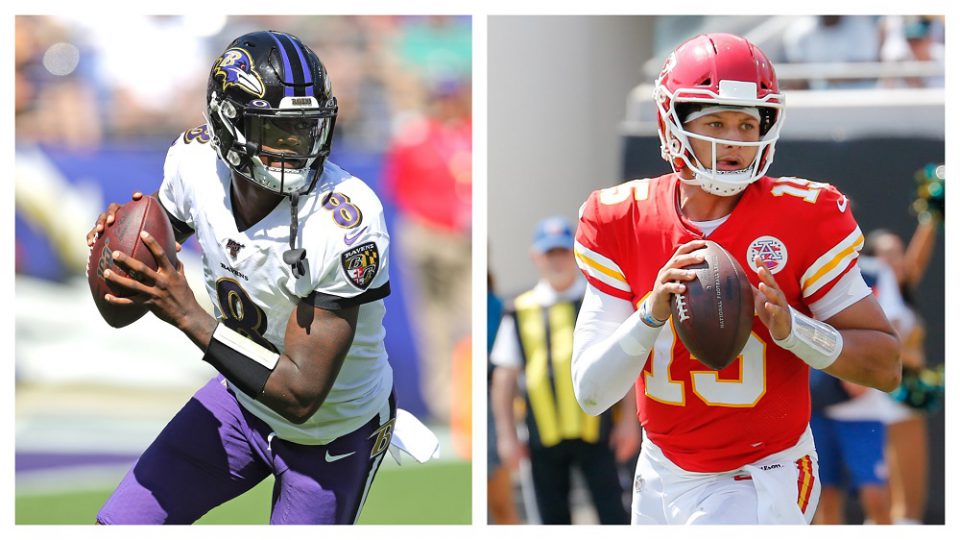 While there are many storylines to follow coming into the 2020 NFL season, such as how Tom Brady will do without Bill Belichick, and the Jacksonville Jaguars’ evident efforts to ‘Tank for Trevor,’ the one that sounds off the loudest is Mahomes vs Jackson. Both quarterbacks have only been in the league for a couple of seasons, with Lamar Jackson breaking out last year and Patrick Mahomes doing so in 2018, when he made the All-Pro first team, and yet they are both proven superstars already.

Last season, his second complete season under centre for the Kansas City Chiefs, Patrick Mahomes guided his team to their first Super Bowl in 50 years. It was very much Mahomes’ work that landed them the Lombardi Trophy. Jackson had himself an MVP season, getting the Baltimore Ravens into the Divisional Playoffs round, falling to the surging Tennessee Titans. The stud QBs are primed to headline every highlight reel this season, but will the campaign come down to which one wins the AFC Championship?

Mahomes vs Jackson headlines the season

Mahomes and Jackson went toe-to-toe last season, with both being worthy of the regular season MVP award. Jackson won unanimously, but Mahomes went on to claim the Super Bowl MVP to add some more silverware to his shelf. Jackson has many playmakers at his disposal, including tight end Mark Andrews, potential breakout Marquise Brown, and a savvy running back corps, which he headlined with his own groundwork on a regular occasion. Mahomes’ greatest weapon is his arm, which has several top-class playmakers to find downfield, such as Tyreek Hill, and Travis Kelce, who may be the best tight end in the league.

While they are compared as two of the hottest and most impressive quarterback talents in the NFL right now, the two are incredibly different. As the signal-caller for the Ravens, Jackson oversaw a record-breaking, league-best rushing attack. Under centre for the Chiefs, Mahomes will make passes off-platform rather than using his feet, having the reigns to what’s proving to be one of the most effective offences through the air in league history.

However, one player cannot win it all on their own. While the Chiefs are now proven Super Bowl winners, the Ravens organisation has the better history, even winning it under one of the worst Lombardi Trophy-winning QBs ever. It seems that the only thing that pundits can agree on is that the stacked AFC will be won by either the Ravens or Chiefs, making the winner between the two, should they meet in the postseason, destined for glory a game or two later. Most likely due to their proven credentials, Kansas City are nudged ahead of Baltimore where it counts. As of 10 September, Betway have their Super Bowl odds set at 6/1 for the Chiefs and 13/2 for the Ravens. They are the clear favourites and within touching distance of one another, and while the Chiefs boast the recent record over the Ravens, Baltimore does have the stronger overall team on paper.

Who dares challenge a superstar QB?

The natural place to start when looking for challengers to the assumed favourites is a modern legend, Tom Brady. A record-tying Pro Bowl selection with his 14th in 2018 while at the New England Patriots, Brady has uprooted himself from the cold north to play for the Tampa Bay Buccaneers, where he’s drawn one of his favourite targets, Rob Gronkowski, out of a season-long retirement. However, there are questions around whether the middling offensive line can grant the 43-year-old enough protection, and if Brady can find success without Bill Belichick. Also in the NFC South, another living legend in Drew Brees looks to take another shot at one more Super Bowl with New Orleans, and Brees is, arguably, in a better position to run at the Super Bowl than Brady in Tampa Bay.

As for a couple of dark horse contenders, something special may finally come to fruition for the Dallas Cowboys. The offence is stacked with stars: Dak Prescott’s at QB and can throw to three exciting receivers, Ezekiel Elliott is in the backfield, and the offensive line is one of the best in the league. With an improved defence to help ease the burden on the offence, the Cowboys look like a solid all-around team. Hailing from the AFC, they’ll have an uphill challenge in the playoffs, but the Indianapolis Colts could prove to be a wild card this season. As detailed by News Week, the Colts now have a mighty offensive line that will give veteran QB Philip Rivers plenty of time to make plays, with the former Charger also having a strong backfield to fall back on and a defence stacked with playmakers to help him win games.

Given the strength of the teams and the authority that their young QBs already have, the Chiefs and Ravens are the natural favourites to win Super Bowl LV, with the Mahomes vs Jackson battle set to be the headline of the 2020 NFL season.