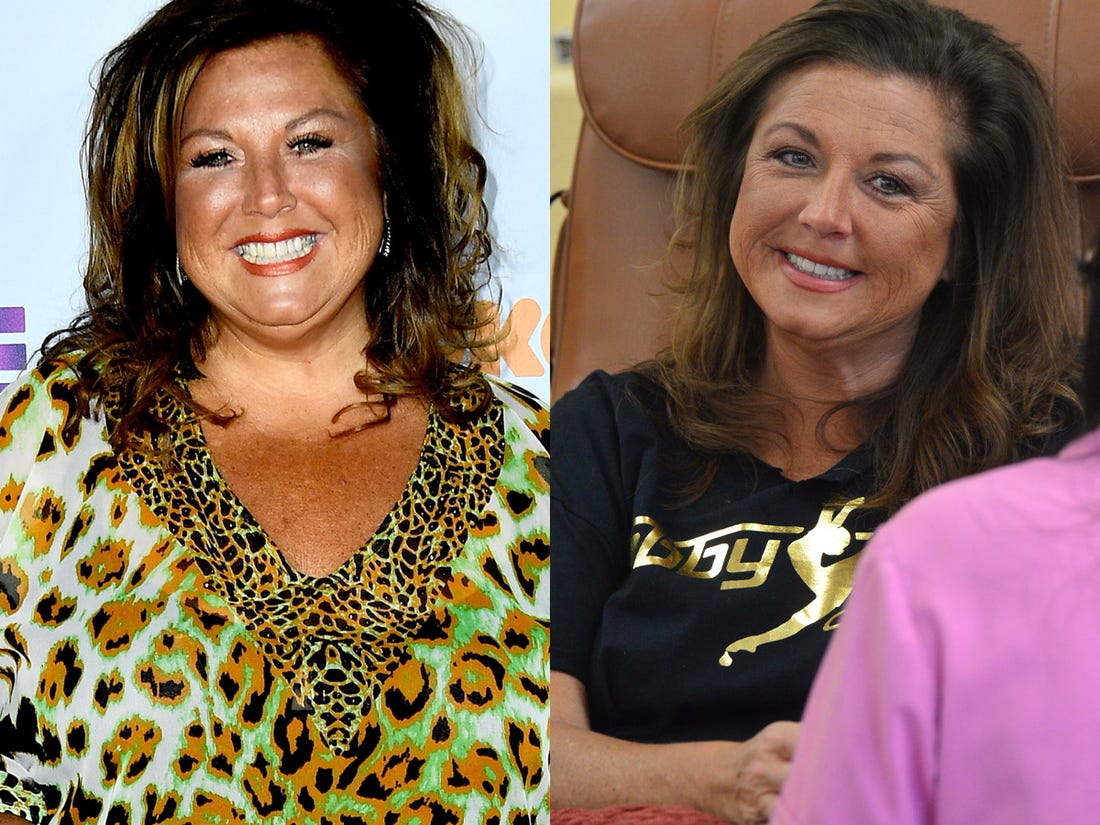 Even before the Dance Mom Abby Lee Miller was sentenced to prison, she was thinking about losing weight loss through gastric sleeve surgery. So, she went through surgery and the

producers of Dance Moms were attempting to keep her overweight, so she wanted to take matters into her own hands. “I hate what I look like on TV and I want to look better and nothing makes the mothers more jealous,” she said.

So, it seems like the gastric sleeve weight loss surgery along with prison time resulted in serious weight loss for Miller, too. Her one year sentencing was reduced to eight months before she was released to a halfway house. According to Entertainment Tonight she lost around 100 pounds when the public saw her again. She also allegedly requested a tummy tuck, breast lift, and skin removal surgery upon her release.

After she was released to the halfway house,she was then diagnosed with non-Hodgkin’s lymphoma, People reports. She entered a certain hospital due to “excruciating neck pain” and arm weakness. Since then, she’s gone through radiation, 10 rounds of chemotherapy, and spinal surgery that has left her wheelchair bound. Suddenly, a prison sentence isn’t the biggest hurdle to overcome.

Abby Lee Miller’s weight loss went from a size 24 to a size 16, but she did it without a trendy diet, crazy exercise routine in 2015.

“That would have been easy,” the outspoken reality star, 49, told PEOPLE of claims that she had dropped the weight with a lap-band procedure.

She never intentionally set out to lose weight, as it happened from the by product of a series of unfortunate occurrences, starting with her mom being hospitalized while battling colon cancer in 2014.

During her mother’s illness with cancer, Miller had been diagnosed with the onset of diabetes and was put on prescription medication. While shooting an Australian special for the show last summer, she ran out of her pills.

“I had to get a prescription refilled – lo and behold, there’s something different about that prescription in Australia,” stated Miller. “I would take this medicine and within an hour, I was vomiting like I was in fourth grade and had the flu or like I had food poisoning. It was awful. After I would throw up, I couldn’t even look at food for the rest of the day.”

“When you’re in and out of the hospital, that hospital food just makes you sick,” Miller said. “I think it was a little bit mental with me.” Then with her mother passing in 2014, she was back on set filming Dance Moms in a Los Angeles-area studio – with no air conditioning.

“It was hot as hell, so nobody was eating a lot,” she explained.

In 2015, her methods of losing weight may have been unconventional but she appreciates the positive response she has gotten, especially from her Dance Moms costars.

Miller had admitted back in 2015 that her weight loss journey isn’t over yet.

In 2017, Entertainment Tonight revealed that Miller underwent gastric bypass weight loss surgery to further her  journey that began in 2015. In 2015 while her mother was diagnosed with cancer, Miller had been diagnosed with the onset of diabetes and was put on prescription medication. While shooting an Australian special for the show last summer, she ran out of her pills. The pills she bought made her vomit within an hour as if she had the flu or food poisoning and then she couldn’t even look at food for the rest of the day.

At the same time she had just quit Dance Moms, and was committed to improving her health following a diabetes diagnosis. A month post surgery, Abby was found guilty of bankruptcy fraud and was sentenced to one year in prison. After she was released eight months later, Miller had lost 100 pounds, according to Entertainment Tonight. She also thought she was no longer diabetic. She revealed to PEOPLE NOW that her doctors in jail discontinued her diabetes medication cold turkey which brought her to the conclusion that she was cured from the disease.

In April 2018, Abby was rushed to the hospital because of an unknown thyroid condition. She was at the hospital again a few days later due to excruciating neck pain and weakness in her arm. Hooman M. Melamed, an orthopedic spine surgeon at Cedar Sinai Marina Del Rey Hospital who treated Miller, told Extra that in just two days, her condition had worsened. She was paralyzed from the neck down. She then underwent an eight-hour emergency surgery to treat what doctors thought was a spinal infection.

After the surgery, E! News reported that Abby Miller was diagnosed with Burkitt Lymphoma, a rare but aggressive type of non-Hodgkin’s lymphoma. Those that are diagnosed with Burkitt Lymphoma, according to the Lymphoma Research Foundation, have to start therapy immediately in order to stop it from spreading. This type of cancer affects the lymph nodes and it could also affect the jaw, central nervous system, bowl, kidneys, ovaries, and other organs.

In 2019, Abby Lee Miller was cancer free. After diagnosis, Miller underwent 10 rounds of chemotherapy and months of rehabilitation, while using an electric chair to be mobile. A year after the initial diagnosis, she revealed she beat cancer. During one interview, Abby Miller states that when she was forced to give up diabetes medication cold turkey in jail, it caused her severe health issues.

“I didn’t realize at the time, I sent everybody an email, telling them ‘I’m no longer diabetic,'” she told People. “The doctor took me off all my medication. Then I get out, and hear, ‘Once a diabetic, always a diabetic.’ It’s just how you treat it. I have so many doctors that have point blank said, ‘You should’ve been weaned off of that medication over a year.’ So to go off if it cold turkey, that’s what caused all of this.”

Miller also called out the doctors who ignored her pain before being diagnosed. “Why didn’t the ER Doctors on duty do their jobs?” she mentioned in an Instagram post on April 17, 2019.”I came in twice with the same symptoms? Why didn’t somebody listen to me, the patient?” Within the same post, she told fans about having a second spine surgery after the initial one and that she’ll be needing a third one.

In the same year, she went for a knee surgery. In June 2019, Miller went back to the operating room; this time for knee replacement surgery. After ignoring it for eight years, Miller had a total knee replacement, a surgery that could help her regain her ability to walk. In one of her latest Instagram posts, the dance teacher revealed a 12-inch scar on her knee and advised her fans to “protect [their knees] with proper alignment and wear knee pads when learning floor work!”

The Dance Mom seems to be talking about positivity by writing on Instagram: Just put one foot in front of the other & soon you’ll be walking out the door!”

Who is Abby Lee Miller?

Abigale Lee Miller is a dance instructor, choreographer, and reality television personality from Dance Moms. Today she is the director and the founder of the Abby Lee Dance Company, which appeared on the reality television series Dance Moms for eight seasons. In June 2016, she pleaded guilty to felony bankruptcy fraud and was sentenced in May 2017 to one year and a day in federal prison; however, she was released early. She is now continuing with Dance Moms for at least one further season.

It’s been a crazy life for Abby Lee Miller over the past few years: The reality star beat cancer, and made an epic comeback this year on Dance Moms season eight. But before all that, Abby served a prison sentence for commiting bank fraud.

In June 2016, she pleaded guilty to felony bankruptcy fraud and was sentenced in May 2017 to one year and a day in federal prison; however, she was released early.

The public first caught wind of the bankruptcy fraud scandal back in 2015. According to People, Abby Miller was indicted for hiding over $755,000 in secret bank accounts. The United States Attorney’s Office then revealed that she was making false claims when it came to her income because some of her money was hidden. As for why she would commit the crime, her lawyer stated that she was trying to save her dance studio.

Just when you thought things couldn’t get worse, Miller was also allegedly instructing other people to help her hide the money. In one email, she types and told those who had access to the funds to clearly avoid putting the money in the bank. She already allegedly snuck $120,000 in Australian currency back to the U.S. by splitting the cash into plastic bags and having her friends carry it in their luggage, People says. By June 2016, she pleaded guilty and was sentenced to jail for a year and a day.

Who is Abby Lee Miller’s daughter?

How long was Abby Miller in jail for?

366 days was the jail sentencing. In 2017, she was sentenced to 366 days in prison after being convicted of bankruptcy fraud. She was allowed two years of supervised release, and then a fine of $40,0000.

According to the LA Times, while the the bankruptcy proceedings were going on in 2013, Abby Lee allegedly hid $775,000 of her Dance Moms earnings in secret bank accounts. But she also smuggled $120,000 of Australian currency into the country without declaring it at customs upon arriving.

She would have gotten away with bankruptcy if it wasn’t for a “channel-surfing judge” who spotted her on television while working on her bankruptcy case. He calculated that she must be making far more than the $8,899 in monthly income she initially declared,” according to the Associated Press. Abby Miller Lee ended up completing about eight months of her one-year prison sentence, and was released.