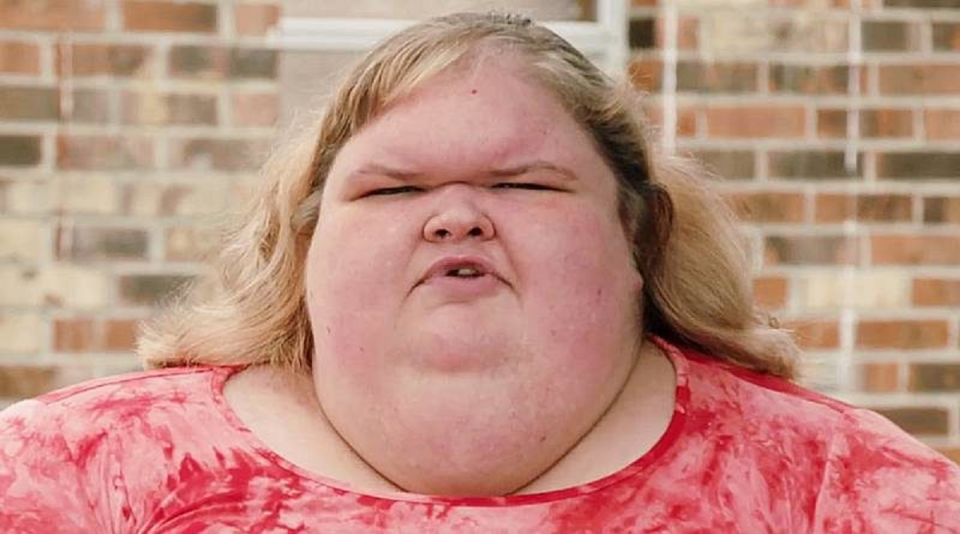 Tammy Slaton was one of the key cast members of the show 1000 Lb Sisters. A lot of fans of the show were concerned that Tammy Slaton might’ve passed away because of her massive weight. In recent episodes, it has become clear that Tammy is struggling to lose weight and has actually gained a lot more weight. In the season 2 finale, Tammy weighed 665 pounds. “I mean, sometimes I try to eat healthier, and then other days I wonder, ‘What the heck is the point?'” Tammy confessed. Tammy Slaton was also diagnosed with COVID-19 in November 2020. Because of her preexisting obesity related health conditions, Tammy Slaton had to be shifted to a hospital. She was discharged after two weeks but her condition was serious enough to require an oxygen cylinder to let her breathe. Her serious condition led to many fans speculating that Tammy Slaton had passed away. Let’s find out if it was true.

Are the rumors true? Is Tammy Slaton dead? While it is true that Tammy Slaton was struggling on her weight loss journey and has in fact tested positive for COVID-19, the 1000 Lb Sisters star herself is still alive despite rumors that something has happened to her.

Tammy continued to post videos and photos to her TikTok and Instagram accounts. His last TikTok is on March 27 (at press time), showing his response to a fan on the platform.

It’s unclear when the rumors started, but this isn’t the first time Tammy has faced rumors of her own death. Tammy Slaton expressed her displeasure with the rumours about her death with an Instagram post where she mulled why people lied so much about her death even though she had been active on Instagram.

In 2015, Amy started similar rumors when she hit social media telling fans that Tammy had fallen and wasn’t sure if she was going to pull it off. To the dismay of fans, Amy started a GoFundMe to prematurely fund Tammy’s funeral because she didn’t think her family could afford it.

What was the deal with Tammy Slaton’s funeral?

“I know you have a health card, but it won’t cover all the bills. All of our checks are needed just to pass. So this GoFundMe account will be for Tammy’s funeral if she dies. She is not dead yet, so please pray that she gets better. Please pay so that we don’t have this funeral and when you get home, the money will go to pay the medical bills, ”he said at the time.

Amy Slaton received heavy criticism for the video and fans called it a desperate way to make some cash at the expense of her sister’s health.

Season 3 of 1000 Lb sisters began filming, according to Tammy’s brother, Chris Combs. For Soap Dirt, Chris blurted out that filming for the new season had already started and tagged both Amy and Tammy, meaning they will be on the show (and that Tammy is very much alive).

How has Tammy Slaton’s life been since she became a reality TV star?

The life of a reality star can have stressful times. Tammy Slaton from TLC’s “1000-Lb. Sisters” knows it all too well and has been going through it. The 34-year-old woman battled COVID-19 and, to make matters worse, struggled in her relationship with her sister Amy Slaton. Tammy has also been at the center of quite a few rumors. In the months after posting, Tammy’s body has not been shown in any of her social media posts. His close-up photos have been unusual and the circumstances have fans speculating about what could be happening.

What happened to Tammy Slaton at the end of 1000 Lb Sisters Season 2?

The popular theory has been that Tammy has lost weight. When “1000-Lb. Sisters” season 2 ended, viewers were left with the possibility of Tammy entering a wellness center to help her lose weight. Some of the rumors, covered by the gossip site TVShowAce, conveyed that Tammy was in a facility but was expelled for hitting a nurse and having a relationship with a security guard.

Tammy Slaton also encouraged all her fans to think for themselves and not just believe every rumour. “Seriously, all of you should stop believing everything you hear and see online. I would never in 1,000 years hit, kick, bite or throw anything at a nurse,” he said in an Instagram video.

A lot of fans of Tammy Slaton and 1000 Lb Sisters have been speculating about the absence of Slaton from social media. A lot of fans thought that once the news of a third season was leaked, Tammy Slaton would become more active on social media. After receiving a nasty comment on TikTok where a fan said they unfollowed Tammy because her videos were all the same, she addressed why things have been pretty basic in her posts.

“I’m under contract,” Tammy noted in her video response, explaining that she can only show what she looks like from the chest up. “When we signed the contract, we said that we would not reveal ‘spoilers’, so whether there was weight loss or not, I can’t.”

It’s unclear at this point what season 3 will focus on, but it wouldn’t be surprising if the new season duplicated Tammy’s struggles with weight loss. This was a huge focal point in season 2 as Tammy Slaton was shown to disappoint herself and her family by gaining more weight.