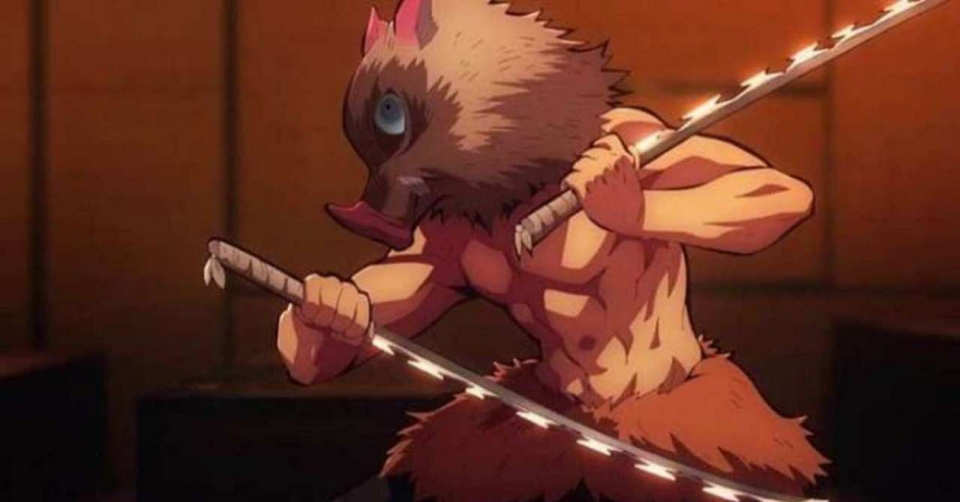 Inosuke Hashibira is the tsundere of Demon Slayer. Tsundere is a term used to describe the process of character development that follows the transformation of a character who is initially polarized warm/soft, cold, temperamental, hotheaded (and sometimes even hostile) into a warmer, friendlier person. Hashibira Inosuke is very arrogant, completely self absorbed and has a somewhat repulsive personality. He acts first and thinks later, and rarely faces any consequences. He has gone on to become as popular as Demon Slayer’s heroes. In this post, we will find out more details about him. Let’s get started.

Having a versatile body is one thing, but to be ready to bend one’s head backwards far enough to almost reach the bottom, is sort of an achievement. Not only this, Inosuke is ready to dislocate various joints of his body as and when he pleases. One unusual aspect of his flexibility is how it extends to his internal organs also, since he’s shown to shift his heart to a special location so that Daki couldn’t pierce through his heart.

While a lot of fans of Demon Slayer might brush Inosuke off as a tsundere, however, there’s more to it than meets the eye. Inosuke was abandoned by his mother and raised by boars. Since he grew up around animals, he only knew the way to behave like them, thus having no idea about the way to behave around people. His seemingly detached demeanour is a result of his upbringing and not necessarily arrogance.

In a flashback about his mother Kotoha Hashibira, it’s shown within the Demon Slayer manga that she loved her child considerably. However, the presence of Doma threatened Inosuke’s existence. In order to protect Inosuke from imminent danger, she threw him into a river when he was a baby and prayed for his survival.

Inosuke’s boar head is his mother’s

For a lot of fans, the boar on Inosuke’s head is just another nod to his eccentricities. However, the head belonged to the female boar who found him and raised him as a mother after Inosuke’s biological mother abandoned him.

Inosuke’s Sub & Dub voice actors have something in common

Inosuke’s Japanese dialogues are delivered by sub voice actor Yoshisugu Matsuoka, while his English voice actor is Bryce Papenbrook (who’s also dubbed Eren from Attack on Titan). Both voice actors have also dubbed as Kirito from Sword Art Online. That is an incredible number of animes that these two have worked together in, leading to an incredible coincidence.

Inosuke is disliked by the Demon Slayer Corps’s Uniform Makers

One of the foremost distinct features about Inosuke is the incontrovertible fact that he’s nearly always half naked in every shot within the anime. He simply wears his baggy hakama pants and his board headgear, and he’s good to travel. He doesn’t like wearing shirts (probably because of his upbringing among boars) and always rips his uniform off. This is why the uniform makers do not like him – they need to constantly keep making him new uniforms that he instantly rips off.

This happens within the Mugen Train Arc within the manga, which wasn’t adapted into the anime, but is shown within the Demon Slayer movie. Here, Inosuke and Tanjiro are caught during a deadly battle with Enmu, who was aboard the Infinity Train. This ends up being quite tough for the boar headed Inosuke who struggles to keep up with the Lower Moon demon.

During the Hashira Training Arc, all Demon Slayers partake in extremely difficult training exercises. As is that the case with most students, they hated it and described it as Hell on Earth.

However, Tanjiro and Insouke’s attitude were the other – both viewed these exercises nearly as good for them because they helped them become better Demon Slayers.

Entertainment District Arc shows a huge fight between the Upper Moon demon Doma and Demon Slayer Inosuke. The boy’s kick to the demon’s stomach dislocates his joints. He immediately attacks the demon together with his sword, but fails and cuts another part (and more eventually). The ferocity of the attacks leads Doma to tell Inosuke that he is the most messed up human fighter he has ever encountered.

In a similar attack to the one mentioned above, Inosuke utilizes his unique Breath of the Beast: Godly Undulating Slice to attack Doma while he’s recuperating from his strong kick. However, Inosuke misjudges his attack, and rather than slicing Doma’s stomach, his attack ends up cutting Doma’s eye instead. That doesn’t seem to affect Doma much because of his incredibly high pain tolerance.