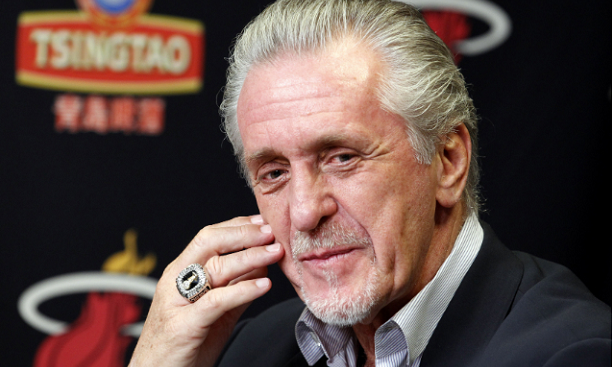 Patrick James Riley, usually referred to as Pat Riley, is a legend of the game. For the fifty years he has been involved with the NBA, he has won a championship in every decade. He has won titles as a player, coach and an executive throughout his career. He is one of the most accomplished people to have ever been associated with basketball. He hasn’t achieved all of that success as a one-trick pony either. He built arguably the most electrifying offensive system in NBA history, the Showtime Lakers. He also went on to build one of the toughest and fearsome defensive systems with the New York Knicks.
Such greatness usually comes to people who operate on the edge, outside of their (and many other people’s) comfort zone. ‘Playing it safe’ never brings success of such gargantuan proportions. Pat Riley has faced several tampering allegations throughout his career. And he hasn’t been renowned for mincing his words. Here’s what he had to say to Danny Ainge after Ainge criticised LeBron James: “Danny Ainge needs to shut the f*** up and manage his own team. He was the biggest whiner going when he was playing and I know that because I coached against him.”
However, when NBA fans look back at him, they should look at him as the Steve Jobs of the league, not Mike Tyson. Those of you who are familiar with Steve Jobs’ work will remember that he did not actually invent most of Apple’s innovative features generally associated with him. Instead, Jobs sought those features out, understood their potential, and utilized them to propel Apple to the top of the technology world.
Pat Riley’s modus operandi has been very similar to Jobs’. He has continuously evolved to stay on the cutting edge of basketball. Being relevant and winning consistently throughout his career. Pat Riley won his first and only title as a player with the 1972 Los Angeles Lakers, helmed by Jerry West and Wilt Chamberlain. Riley retired after the 1975-76 NBA season and started working as a broadcaster for the Lakers. In 1979, he was offered an assistant coaching job by incumbent Lakers coach, Paul Westhead. During the early stages of the 1981-82 season, Westhead was fired by team owner Jerry Buss because he was slowing down the tempo at which the Lakers played.
It was Jerry West, not Riley, who got the nod to be the next head coach. But West turned down the job and Pat Riley promptly seized the opportunity. He explained his move to the Los Angeles Times: “Well if nobody wants it, I’ll take it. It was all on an interim basis for a while. [Buss] made Jerry [West] go down on the bench with me for about three weeks to make sure I didn’t blow this $100-million asset.  We won like 12 games in a row or something like that, and here I am today.”
As soon as his position was cemented, Riley started his Steve Jobs like innovation process. Videotapes and game films were in their nascent stages, as far as technology went in 1981. Riley completely embraced them back then. He would watch videotapes for hours, including at half-time, in order to make the best possible in-game adjustments.  He recorded every single play of every single game, breaking down every possession to find an advantage. He was a tireless worker and wanted all of his players to have a similar mentality. After the Lakers won the NBA Championship in 1987, this is what he had to say: “Hard work doesn’t guarantee anything, but without it you don’t stand a chance.”
Jerry Buss and Jack McKinney, the coach before Westhead and Riley, had introduced the concept of the up-tempo, exciting offensive system which went on to be called Showtime. Riley perfected that offence and through the ‘magical’ talents of Magic Johnson, made the Lakers a dominating force during the 80s in the NBA.

As explosive and potent as the Showtime Lakers’ offence was, Riley also ensured that the defensive schemes matched the pace of the offence. His defensive systems took full advantage of everything allowed within the NBA rule book. Many of the schemes, such as the 1-3-1 half court trap were so effective that the NBA had to redefine its rules when it came to illegal defence. As the stars of the Showtime Lakers aged, Riley adjusted his game plan accordingly. He slowed the pace down considerably and by the time the Lakers won the 1988 NBA Championship, they had become a half court centric team.
After losing to the Detroit Pistons in the 1989 NBA Finals, Pat Riley immediately recognized the effectiveness of the tough, gritty and brutal defensive schemes of the ‘Bad Boys’ Pistons team. When he left the Lakers to coach the New York Knicks, he created the team with a tough, defensive mentality. Growing up in New York state, Riley had always been very tough. His high school teammate Paul Heiner narrated an incident during a three-on-three game. Riley took an elbow to his face which knocked a tooth out and blood gushed out profusely from his mouth. However, Pat Riley calmly walked over to where the tooth was, kicked it out of the court and continued playing.

After the New York Knicks, Pat Riley moved on to the young NBA franchise, Miami Heat. He has gone on to become as ubiquitous with Florida as Disney World. When he arrived in Miami, he was already very renowned for wearing Armani suits and having his hair slicked back like he was a character from the Godfather series of movies. He even wore 4 championship rings on his right hand. While Riley’s connections with the Italian Mafia are just made in jest (based upon his appearance), he did make some Godfather-esque moves after landing in Miami. As team president and head coach, he acquired superstar center Alonzo Mourning in a six player trade in 1995.

He continued with his radical moves that kept him ahead of the competition in the NBA. After drafting shooting Dwayne Wade out of Marquette in the 2003 NBA draft, Riley acquired center Shaquille O’Neal from the Lakers in 2004. The league’s newest dynamic duo won an NBA championship in 2006. In 2010, he acquired Chris Bosh via sign-and-trade, alongwith LeBron James, one of the five greatest players in NBA history. Oh, and he also managed to acquire one of the league’s greatest shooters, Ray Allen, who made this incredible shot in Game 6 of the 2013 NBA Finals:

Between 2010 and 2014, the Miami Heat made four straight NBA Finals, emerging victorious on two occasions. After losing the 2014 NBA Finals to the San Antonio Spurs, LeBron James left the Heat to play with the Cavaliers. Age and attrition reduced Dwayne Wade’s effectiveness and Chris Bosh’ health problems heavily restricted his contributions. Surprisingly, in the four seasons since LeBron James left, the Miami Heat have only had one losing season, a lot of that credit goes to to the great coaching of Erik Spoelstra. However, the outlook for the 2018-2019 season doesn’t seem very bright for the Heat. The team is devoid of superstars, cap space and major off season roster changes aside from undrafted free agents Malik Newman, Duncan Robinson, Yante Maten. During the 2018 NBA Playoffs, the Heat lost to the Philadelphia 76ers in the first round. Even though it was a hard fought series, the fact that the 76ers best players are 21 year old point guard Ben Simmons and 24 year old center Joel Embiid shows how the Heat really have no chance against teams like the 76ers, going forward.

The 2018 Free Agency had a lot of great players like LeBron James, Paul George, Kevin Durant and Demarcus Cousins. However, the Miami Heat didn’t make any important signing during it. This is finally giving rise to the almost blasphemous question, “Has the NBA passed Pat Riley by?” In July, Riley said this to Miami Herald‘s Barry Jackson: “Free agency and room can be overstated.You can have room fatigue. Since 2010, we have been a team that has always been chasing somebody bigger and better.” For someone who has been a genius at adapting to the changing times and creating cap space to sign the best players, such a comment was slightly unexpected. When questioned about the impatience an anger of the Heat fan base, Riley said: “I don’t feel that level of anger”.
As things stand currently, the Miami Heat have a huge amount of money tied up with role players and they are paying franchise player money to center Hassan Whiteside, whose old school game is obsolete and ineffective in today’s NBA. Realistically speaking, Pat Riley won’t really have much cap room to operate until the 2020 season.

Ever since the Golden State Warriors’ juggernaut has taken the league by storm, multiple NBA teams have decided to play the waiting game. Letting age and attrition eat into the Warriors’ dominance, instead of trying to assemble a team good enough to beat the Warriors now. Many good teams have also blown up their rosters and gone for a rebuild, so that they are ready to ascend the throne once time makes the Warriors vacate it. Pat Riley has got the option to sit and wait. He transformed a 30 year old franchise into an NBA powerhouse and he has been successful in every era, at every level. Who is going to dare to challenge the wisdom and knowledge of the NBA’s Godfather afterall?