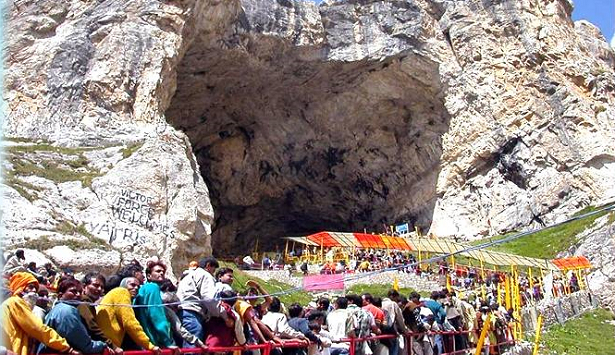 Srinagar, 27 August 2018: The Amarnath Yatra of this year concludes on yesterday in Jammu and Kashmir. The Yatra concluded with Shravin Purnima, amid chanting of religious Hymns in the spiritual ambience of south Kashmir Himalayas.
The Yatra had started from 28th of June from both sides of the cave on the Baltal and the Pahalgam routes and concluded on Sunday.
After, the conclusion of the Yatra Additional CEO interacted with the Camp Directors, Additional Camp Directors, Deputy Camp Directors and other officers at the cave, at the two important base campsites of Neelgrath and Baltal base camps. The Additional CEO took a review of the ongoing sanitation process and cleansing initiatives being undertaken by the camp directors the second phase of the sanitation drive.
The Additional CEO expressed satisfaction over the sanitation drive taken up by the shrine Board with the cooperation of the Anantnag and Ganderbal District Administrations. Also, the CEO thanked Chief Executive Officers of Pahalgam Development Authority (PDA) and Sonamarg Development Authority (SDA).

“ the holy mace of Lord Shiva, popularly known as ‘chari Mubarak’, carried by a group of sadhus and devotees led by its custodian Mahant Deepindra Giri, arrived at the holy cave in the wee hours for the day-long prayers on Sunday,” the officials added.

Kumar exhorted the Camp Directors, Additional Directors, Deputy Camp Directors CEOs of SDA, PDA and the head of each involved agency to ensure that all bio-degradable and non-biodegradable wastes, should be disposed of in accordance with the proper plan.
Kumar thanked the Civil and Police Administration of Anantnag and Ganderbal districts, J&K police, Central Armed Police Force (CRPF), Army, Various State Government Departments for the smooth conduct of the Yatra this year.
To make this year Yatra more secure and to make the yatris feel comfortable during the Yatra .the Jammu and Kashmir Government had for the first time introduced Radio Frequency (RF) tags to track Amarnath – bound Vehicles. Also, the motorcycle squad of CRPF was introduced in this year’s Yatra.
About 40,000 personnel from the J&K police, Paramilitary Forces, National Disaster Response Force (NDRF) and Army were deployed for this years yatra, the officials said.
Around 2,85,0006 lakh Yatri’s had paid obeisance at the snow idol of shiv at the cave during this year’s annual yatra said Additional Chief executive Officer of Shri Amarnathji Shrine Board Shri Bhupinder Kumar.
The number of yatris increased this year as compared to the previous year.
About 38 people including pilgrims, service providers, and pony-wallas people died during this years yatra. The maximum deaths were due to natural causes including weather as well the officials said.
The Amarnath Yatra Continues for two months every year in the state of Jammu and Kashmir.
Amarnath cave is located in the southern part of the state in the Anantnag district about 141 km from Srinagar the summer capital of Jammu and Kashmir state.
Every year lakhs of pilgrims visit the holy shrine.
With inputs from PTI and KNS

The Actual History of Dowry System in India : Why did such an evil-practice ever come into existence?