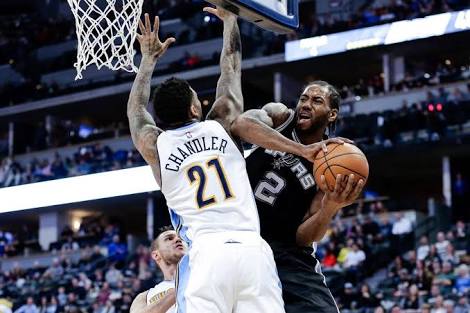 According to ESPN’s Adrian Wojnarowski, the Philadelphia 76ers have successfully completed a trade for the Denver Nuggets’ Wilson Chandler. This move is being seen as a salary dump for the Nuggets. Sports Illustrated’s Jake Fischer reported that the 76ers also received a 2021 second round draft pick and second round draft swap rights for 2022.
With a core of Joel Embiid and Ben Simmons, the 76ers need great wing players to truly build a contender (and possibly a dynasty). However, most of the best available wing players are already off the market. Trevor Ariza, Kentavious Caldwell-Pope, Will Barton and Avery Bradley have all inked new deals. They even lost Marco Belinelli to the Spurs and Ersan Ilyasova to the Bucks.
A versatile wing like Chandler will help the 76ers at the both the forward spots. He won’t be able to replace Belinelli’s shooting prowess, but the minutes he can play at Power Forward will definitely help in offsetting Ilyasova’s departure.
Now, on to how this move might have an impact on the Kawhi Leonard trade. The 76ers have been in talks with the Spurs about acquiring Leonard from the start. Chandler’s 1 year contract isn’t necessarily the thing that will swing the trade in their favour. It has more to do with the flexibility that he brings to the roster.
Wilson Chandler is a very versatile wing player who can be moved around the perimeter on both offence and defence. He is a decent 34.1% three point shooter for his career. So he can help space the floor for Simmons and Embiid to operate. This also provides the 76ers the flexibility to package Robert Covington and Dario Saric with some draft picks for a blockbuster Leonard trade.
Kawhi Leonard had initially expressed a strong inclination towards signing with a Los Angeles team (most likely the Lakers). The 76ers obviously can’t do anything to match that. However, according to Fox Sports’ Colin Cowherd: I don’t think Kawhi Leonard is jumping for joy now that LeBron is a Laker. If anything, he’ll be more open to joining the (Los Angeles) Clippers.
Now, the 76ers aren’t the Clippers either. But the Clippers don’t really have much to offer to the Spurs, especially with DeAndre Jordan’s departure. Any trade package that the 76ers can offer the Spurs, will be better than getting Clippers players like Patrick Beverley, Shai Gilgeous-Alexander or Tobias Harris for Leonard.
There’s no guarantee that the Wilson Chandler trade was made to expedite a trade to land Kawhi Leonard. However, with the 76ers failing to land any free agent so far, it isn’t too far fetched to think so.
previous post