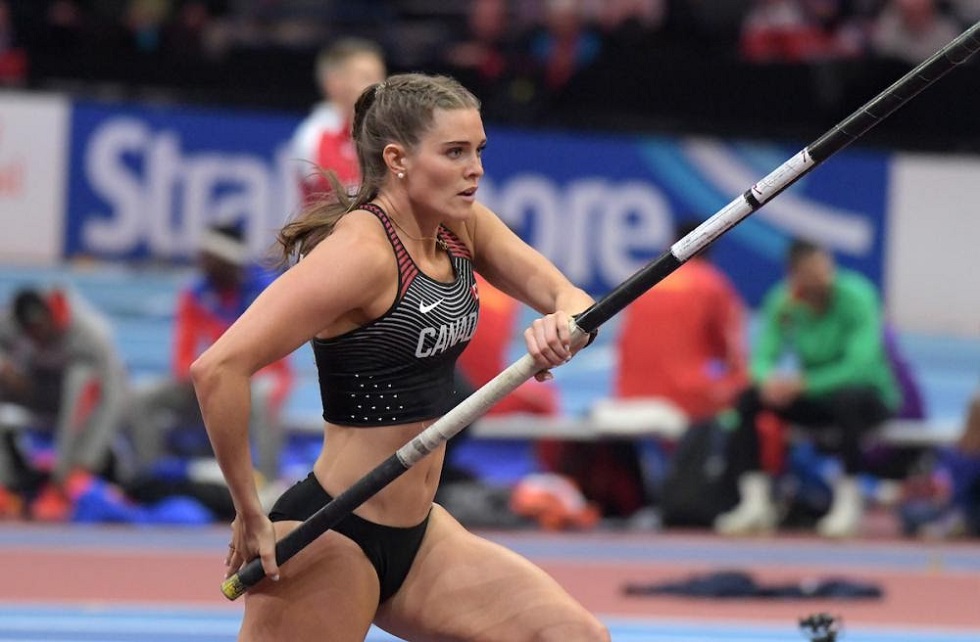 Alysha Newman is one of the most exciting Canadian athletes today. She is a track and field star who specializes in the pole vault. Alysha Newman shot to fame after winning the Gold Medal at the 2018 Gold Coast Commonwealth Games. She set a new commonwealth record when she cleared the bar at 4.75 metres (15 feet 7 inches).

Alysha Newman: All You Need to Know

When was Alysha Newman born?

Where was Alysha Newman born?

How tall is Alysha Newman?

How much does Alysha Newman weigh?

What did Alysha Newman do before pole vault?

Alysha Newman started her sports career with Gymnastics (similar to legendary Russian pole vaulter Yelena Isinbaeva). Newman had to abandon gymnastics at the age of 13 after she suffered an injury to her lower back vertebrae. She took a year off from sports and considered taking up ice hockey or diving. She ended up choosing track and field, more specifically pole vault after a coach recommended it based on her gymnastics background. In hindsight, her 5 feet 9 inch frame would’ve been an issue in gymnastics anyway, so her switch to pole vault ended up being the right thing to do.

How was Alysha Newman’s NCAA career?

Alysha Newman joined Eastern Michigan University in the year 2013 and went on to become the Mid-American Conference Champion after her first NCAA tournament.

She transferred to the University of Miami while following her coach Jerel Langley. Alysha Newman graduated in 2016. She majored in Exercise Physiology. She also had a minor in nutrition.

At the University of Miami’s Hurricane Alumni Invitational on 9 April 2016, Alysha Newman successfully cleared 4.60 m (15 ft 1 in). She broke three records in the process, the University of Miami school record, Atlantic Coast Conference (ACC) record, and the Canadian National record in the women’s pole vault. Alysha Newman went on to win a silver medal in the 2016 NCAA Division I Outdoor Track and Field Championships. She finished her college amateur career as a six-time NCAA Division I All-American.

Which events has Alysha Newman competed in?

She made her Commonwealth Games debut in 2014. She won the bronze medal in the event.

Alysha Newman was a participant of the first ever “Vault the Park”. It was a street vault event held at Victoria Park during the annual Rib Fest at London, Ontario (Newman’s hometown). She bettered her own Canadian record by clearing 4.61 m (15 feet 1.75 inches) at the event.

She improved on her own national record during the Hurricane Alumni Invitational at the University of Miami on April 8th 2017. Alysha Newman cleared 4.71 m (15 feet 5.25 inches) during the event in Coral Gables, Florida. In August, she was a finalist at the 2017 World Championships in Athletics, where she finished seventh by vaulting 4.65 m (15 feet 3 inches).

Alysha Newman finished sixth at the 2018 World Indoor Championships when she cleared 4.70 m.  In April of the same year, she competed at her second Commonwealth Games pole vaulting event during the Gold Coast games. She won the gold medal by clearing 4.75 m(15 feet 7 inches), equaling her personal best and setting a new Commonwealth games record.

In May 2018, Newman’s poles were damaged in transit during her flight to Doha for the Qatar Athletic Super Grand Prix. She competed at the event with poles borrowed from an area athletics club, placing seventh. Air Canada subsequently replaced all of her equipment. Newman then suffered a torn patellar tendon during a warmup at the Prefontaine Classic in Eugene, Oregon.

In February 2019, Newman won the 2019 Indoor Meeting iKarlsruhe with a clearance of 4.71 m (15 feet 5 in), setting the Canadian indoor track and field pole vaulting record. In July 2019, Newman won at the Stabhochsprung Jockgrim meet with a brand new personal best mark of 4.77 m (15 feet 8 in).

Competing at the 2019 Pan American Games in Lima, Peru, Newman vaulted to the gold medal of the pole vaulting event, clearing 4.55 m (14 feet 11 inches). She wasn’t satisfied with her performance and went on to say ” [I] definitely felt that I underperformed.” Later that very same month, Newman won the 2019 Meeting de Paris, her first Diamond League win, setting a new Canadian record of 4.82 m (15 feet 9.75 inches) in the process. That record made her the 16th highest female pole vaulter of all time. She repeated her 4.82m performance and finishing third in the 2019 IAAF Diamond League meet in Zürich, Switzerland.

What happened to Alysha Newman?

In October 2019, Alysha Newman and her boyfriend, Pittsburgh Steelers linebacker Anthony Chickillo were involved in a fight at Nemacolin Woodlands Resort. While Alysha Newman was cited for harassment, Chickillo was charged with simple assault, criminal mischief and harassment. All the charges ended up being dropped eventually. The Pittsburgh Post-Gazette reported that the district attorney dropped the charges against Pittsburgh Steelers linebacker Anthony Chickillo, which officials say stemmed from an incident at a resort in Pennsylvania earlier during the month.

Alysha Newman took to Instagram to address the situation.

“Me withdrawing charges doesn’t mean I take violence lightly,” she wrote. “There were no payoffs, no behind the scene deals, there has been no contact between Anthony and I since the night of the incident.

“I don’t condone violence from males or females because it’s not right and I will forever stand behind that! This incident doesn’t define who I am , I choose to move forward, to focus on me and the next 10 months preparing for the Olympic Games.”

She added: “Part of my choice also means allowing myself to heal, to forgive and grow stronger. Thank you everyone for your support over the last 2 weeks.”

According to the Pittsburgh newspaper, district attorney Richard Bower said the pair “wish the best for each other” and the legal matter has been resolved.

The Post-Gazette reports that Chickillo, 26, was arrested Oct. 20 on charges he assaulted the 25-year-old London woman in a hotel room at Pennsylvania’s Nemacolin Woodlands Resort. He was charged with simple assault, criminal mischief and harassment while Newman was “cited for summary harassment.”

Police say the argument began over table games at a casino shortly after 1:30 a.m. and continued in the hotel room, the Post-Gazette reported. It got physical, with the couple giving conflicting accounts of what occurred but, the newspaper reported, the NFLer admitted to pushing Newman down.

After a physical confrontation, Newman locked herself in the room’s bathroom to await police, the newspaper reported.

Dermal Piercing: All The Questions In Your Head, Answered!