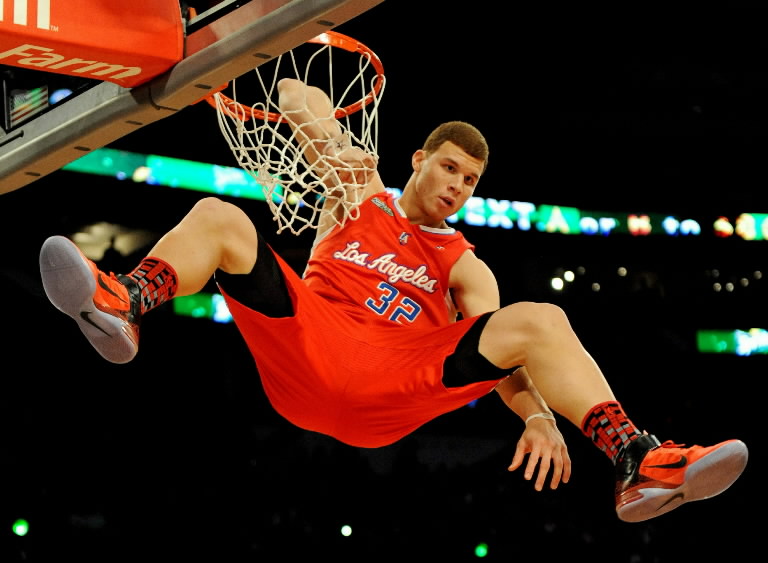 When Blake Griffin was drafted first overall in the 2009 NBA Draft by the Los Angeles Clippers, the entire NBA universe was on the edge of its seat, the high flying superstar out of Oklahoma was bound to dazzle everyone with his remarkable skill set. He led the NCAA in rebounding and was named to the All American First Team at the end of his sophomore season. He swept all six college player of the year awards at the end. The sky seemed to be the limit for Blake Griffin. With an accomplished high school and college career like his, multiple NBA Championships along with Olympic and World Cup glory was most likely in store for him.
However, things got off to a rocky start, he hurt his knee during the final pre-season game and missed out on the entire season. He made a strong comeback next year for his (eventual) rookie season, making the All Star team, winning the Slam Dunk Contest and the Rookie Of The Year award. During his time in the league since, he has been selected for five All-Star teams and four All-NBA teams. Los Angeles Clippers, the team that drafted him, pushed Griffin as the face of the franchise and his stellar play turned him into one of the brightest young stars of the NBA. His extraordinary dunking ability (along with teammate ‘s), gave birth to the ‘Lob City’ phenomenon.
However, some unfortunate and untimely injuries to both himself and his teammates ensured that the Clippers never really managed to go deep into the NBA postseason. They never even made the Western Conference Finals. The same misfortune of injuries followed Griffin into his stint with the USA basketball team. In 2012, during the initial days of the training camp, he dazzled everyone with his amazing dunks. Unfortunately, he got injured soon after that and missed the London Olympics. 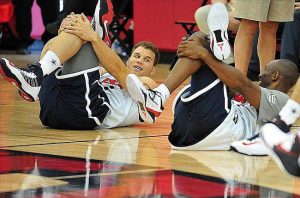 Similar scenarios played out during the Rio Olympics and the World Cup of Basketball. So, when he was invited for the two day camp at Las Vegas with the national team, he was jubilant but cautious. He isn’t the green and starry-eyed young high flyer from seven years ago, he’s a 29 year old veteran who has learned about the uncertain nature of the NBA in the hard way.
Back in 2012, the opportunities to play for the Team USA might have seemed plentiful. After all, some or the other sporting event keeps happening every other year at least. However, the injuries have clearly shown that a basketball team which has an unlimited supply of world class talent, will never wait for an injured superstar. So if you miss your chance, good luck getting it back. This is what Griffin had to say about it: “It’s always a privilege to be here. I say it all the time, USA Basketball is just a different thing, a different atmosphere and a different type of respect. It’s important, too. And I think guys who have played all the way through will tell you that. I’ve been close a couple of times and barring injury, I probably would have been there. And it’s still something I look forward to accomplishing.”
The USA basketball camp is the perfect place for the NBA superstars to get some humility. You might be a superstar of your quaint little midwestern team but when you see Kevin Durant raining down threes from 30 feet every day, you are bound to get your head out of the clouds, and feet firmly back on the ground. This the place where the absolute best are separated from the rest.
Even for the best of the best, there are no guarantees. If they get injured, the team won’t wait for them to recover. They will just call the next best player. So being at the right place at the right time is extremely important. The World Cup in China in 2019, and the highly revered Olympics are being hosted by Tokyo in 2020. The players need to ensure that they are healthy and playing at their best during that time. If there is any slip up, it won’t even take seconds for a player to lose their spot to some other superstar.
The current minicamp at the University of Nevada, Las Vegas has been organised mainly to help the 35 players on the national team roster to familiarize themselves with new coach Gregg Popovich of the San Antonio Spurs, who took over from long time coach and Duke University legend, Mike Krzyzewski. However, for players like Blake Griffin, it’s also a reminder of how tough it is to make the roster and the fact that his time on the international circuit is limited. The talent pool is so deep that some players of his calibre won’t make the 12 man team for the World Cup or Olympics. 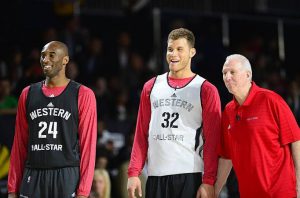 This is what coach Popovich had to say: “The pool is deep as you might expect , but what’s more impressive is people like Blake, people that no matter who they are, whether they are young guys or seasoned guys like him, they want to be here and they want to be a part of this. They understand it’s a loftier goal than our NBA teams. This is above that. And he feels it, obviously, and that’s why he’s here.”
Griffin, who was hailed as the saviour of the Los Angeles Clippers once, is currently handling his transition into the same role for another franchise, the Detroit Pistons. His trade to the Detroit Pistons shocked the whole league. Especially after the Clippers re-signed him to a five year, $173 million contract. They had also said that they hope to hang his jersey in the rafters some day. However, he was soon shipped off to the Detroit Pistons as a part of a blockbuster trade.
The NBA landscape shifts more often than sand dunes in the desert these days. Griffin’s trade is just one of the many examples. Charlotte Hornets point guard Kemba Walker had this to say: “It’s going to be fun. It’s going to be crazy. We won’t have to deal with (LeBron James) as often as we used to, which was always a monster, but things have shifted quite a bit the past few years. Guys are moving, things change constantly, and that forces everybody to stay on their toes because you just never know.”
Blake Griffin seconded that thought: “I mean, the league looks completely different, not only the style but also where guys are now, it’s just completely different. I think it’s cool, man. The thing that’s great about NBA basketball is guys change teams and the power in the league shifts a little bit … it’s just always something exciting going on in basketball.”
One thing that Blake Griffin must appreciate more now, is the absence of extra attention on him. When he was the high flying ‘Lob City’ superstar, people and the media showered him with attention. Tracking his every move and ensuring that every insane dunk he did during practice, went viral. On this occasion the crowd seemed surprised to even see Blake Griffin on the court. Many had forgotten that he was even a part of the USA Basketball Program.
Griffin didn’t seem too perturbed by it. His experience in the NBA has taught him how to take these things in his stride. He can see the bigger picture and how he fits within it. Whether it’s with the galaxy of stars in the United States Senior Men’s Basketball Team or the rebuilding NBA franchise of the Detroit Pistons.
He truly values the opportunity that he has been given and doesn’t take his time for granted. He knows how difficult it is to succeed among the World’s basketball elite. This is what he said in conclusion: “USA Basketball is different than any other basketball you can play. You ask anybody in here and they’ll tell you the same thing. It’s just different, being here with all of these guys. I wouldn’t trade it for anything. It also goes to show the depth of talent in the NBA, just from the United States. There are guys who are at the top of their game who aren’t even here. And you still look at this group and you figure you’ll still be able to win a gold medal. So it’s humbling to come to something like this and see all of these talented players. It keeps you working.”