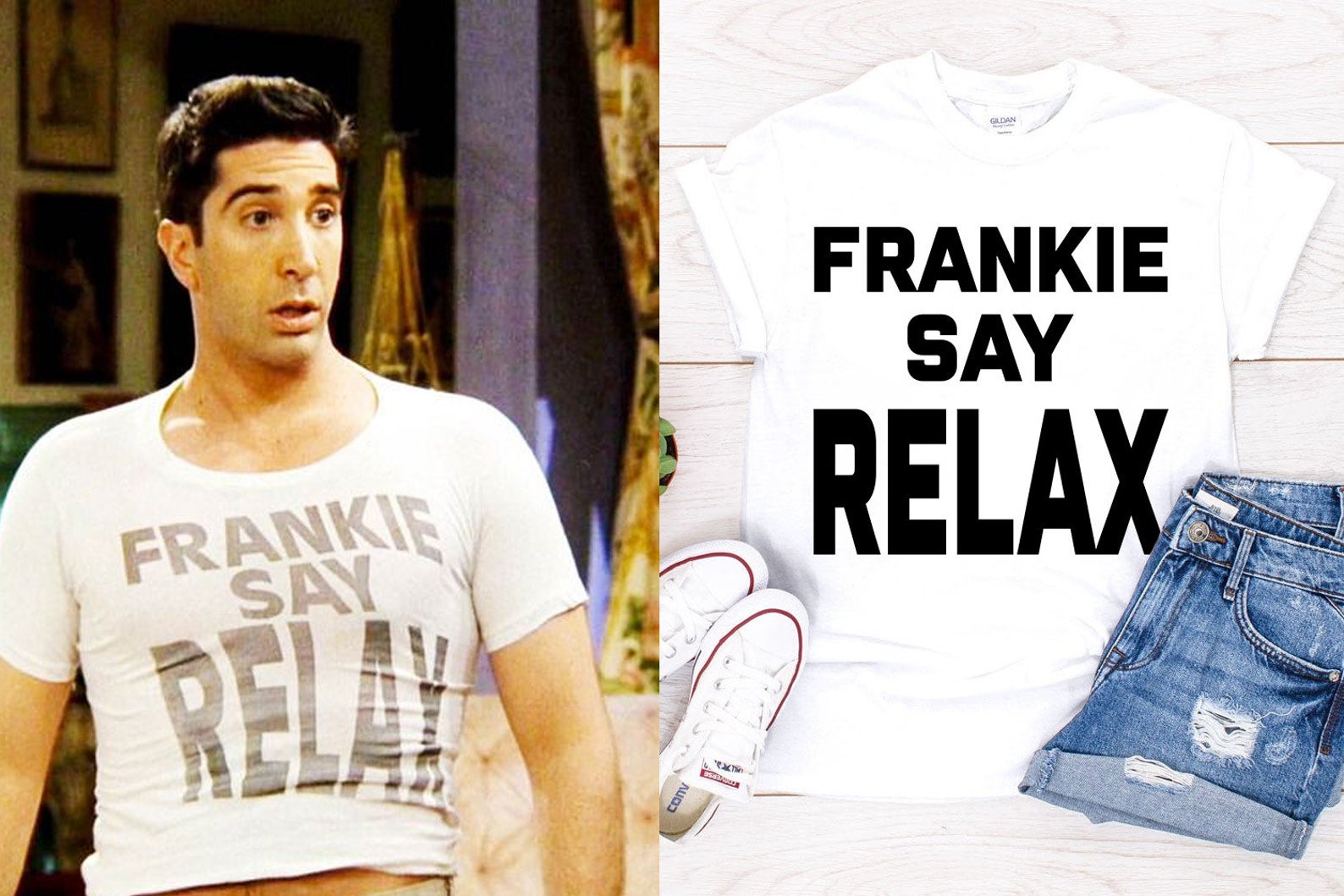 Friends recently celebrated its 25th anniversary on September 22nd 2019, and it’s fair to say that this show will run strong for another 25 years. It’s no wonder that this year, a website named Firebox has created a giant turkey head costume. The costume is a recreation of an episode of the iconic show where Monica wore a giant turkey on her head to cheer up Chandler. We just hope there’s more than one creation like this next year!

Choosing a Halloween costume, even for the crazed and biggest fans of Friends, can be difficult. Everything from Rachel’s ugly pink bridesmaid “bo-peep” or bubble gum dress, to Monica’s eye patch and plaid shirts with short hair, to Joey who went as Chandler one Halloween, to Ross as the Holiday Armadillo, or Phoebe with her guitar to Chandler in his 80’s hair can be done. But not everyone is going to recognize it immediately and that’s why we have compiled this list of easy to find costumes that very much ring true to the characters of the beloved show.

If you’re a fan of how Monica and Chandler said their first I love yous, you’ve got your Friends Halloween costume ready! Wear this if you want to give your loved one a laugh after a fight like Mon and Chan did.

You can buy this felt turkey head that comes fully attached with fake sunglasses and a hat. Don’t forget to channel your inner Monica and do the shimmy dance she did while entering.

TIP: Complete the costume with a nice dark green top.

If you’re quirky and unique like Friends’ Phoebe, you don’t want to be a mass produced Pottery Barn apothecary table investor who buys common costumes! No, you won’t something special and with a story. Phoebe Buffay always stood out from her pack of friends and yet also often felt overshadowed. During the show she may have faded to the background, though, she sang, danced, and jogged in the most original and unpredictable ways of Satan (the dog)

So, dress up as Phoebe Buffay in her “That Girl” shirt and milk braids that crown her head while playing sports like a goddess, in “The One With The Football”

Phoebe often wore floral patterns or maxi dresses, but this casual Thanksgiving look was also one of her best.This outfit is quite timeless, since leggings and tees are still popular today.

Undoubtedly, the whimsical enigma of Phoebe came through her quicky style of clothing, that’s why if you Phoebe inspired costumes for Halloween, you will get recognized as her immediately! That way they know that you know, that you look AWESOME!

TIP: Pair this replica of Phoebe’s “That Girl” shirt with leggings, a yellow undershirt, and milk braids. Carry around a football to complete the look.

Ross usually wore button-down shirts and looked kinda casually formal, yet his theme for Spudnik during Halloween in Monica’s apartment was not something ANYONE was expecting. Now, although that costume cannot be worn multiple times each year, a t-shirt that says  “Frankie Say Relax” from the episode”The One With The Tiny T-Shirt”, is something you can wear as often as you like and it’s more recognizable than a potato costume with antennas.

Ross puts the “Frankie Say Relax” shirt on in a fit of rage when Rachel returns some of his things to him after their break up. He ends up giving the shirt back to Rachel, but the scene where he wears the shirt that is clearly too small for him is hilarious.

TIP: To really pull off the Ross look, just make sure to buy a size smaller than you normally would to really capture the look, and walk around all night screaming, “We were on a break!”

Rachel’s most memorable styles were during her time as a waitress at Central Perk. For those of us that started watching from Season 1, this was when we saw her fashion turn into something so classic and beautifully minimal with her fun aprons and some simple denim on.

And if you really want to complete the look, you might need to splurge on her 90’s hairstyle or get a wig as we all know from our own haircut misfortunes, “The Rachel” is impossible to imitate.

This is the easiest DIY to do, as long as you bag this Central Perk apron from Etsy or CafePress. Then you can choose any one of Rachel’s iconic waitressing outfits ranging from denim shirts to a dark blue turtleneck with cute skirts.

Don’t forget the mug and the drive of an ambitious woman who is more than “just a waitress”.

Monica and Chandler as Catwoman and Velveteen Rabbit

When Monica and Chandler dressed up during the Friends episode, “The One With The Halloween Party,” they both wore stand out costumes. While Monica opted for a Catwoman ensemble, Chandler channeled his favorite childhood character with a “Velveteen Rabbit”-inspired look. The combination made for a funny and unforgettable couple’s costume.

You and a partner or friend can recreate Monica and Chandlers’ ensembles with a Catwoman and pink rabbit costume. Make sure you two stick together at the party so people know who you are.

The One Where No One’s Ready: Phoebe’s Hummus and Joey Wearing Everything You Own

Friends gave us one of the most memorable and funny episodes when no one was ready for Ross’s event. If you look back at your life, there’s probably someone like a roommate or a sibling who could get you to act like a child at the worst possible time. That’s what made this episode SO relatable. Whether it was when Chandler and Joey arguing over the “essence” of the chair, or when Phoebe’s spilled hummus while waiting around for Rachel who took forever pick an outfit, or Ross and Monica who said things they didn’t want to, but couldn’t control the words as they were coming out of their mouths, we’ve all screwed up from time to time.

Luckily, you don’t have to be late for Halloween if you or your partner picks Phoebe’s sleek understated yellow maxi dress and Joey’s countless amount of ties and shirts.

Tip: A Christmas ornament accessorizing will go down as one of the most memorable moments in Phoebe fashion history, and that’s what makes this Halloween costume very simple to DIY.

When you suit up as lovable Joey, you can easily grab a 6 pairs of ties, a thin sweater or two, pants, and if you’re a serious costume connoisseur, then we suggest sticking just the bottom of yellow and red shorts on one white boxer short, but please, please don’t actually borrow underwear from your roommate.  Make sure you two stick together at the party so people know who you are.

The One With The Football: Girls vs Guys

This episode was a great one to watch and all Friends fanatics will remember the competitive spirit of the game, and the flirting competition that happened on the side as well. One of the easiest DIY costumes for you and your partner to wear is this Rachel and Monica costume. Notice the simple green shirt, black full sleeves under, black pants and black cap facing backwards that makes the Rachelness come fully through.

On the other hand, you can look like Monica will a  casual tied back hairstyle sporting a headband, an oversized blue sweatshirt and grey pants. Also, make sure you two stick together at the party so people know who you are.

TIP: To really get into these Friends characters, to wear Monica’s costume you need to have black hair and blonde or brown hair in a plat, if you want to go as Rachel.

The One With The Girls T-Shirt

Rachel didn’t wear her “Girls” t-shirt until “The One Where Ross Dates a Student” in season six of Friends , but the graphic tee has become an emblem of the show since Monica had also sported it. Rachel and Monica “Girls” shirt was one of the more casual looks. The simple shirt looked effortlessly casual and cool.

Fun Fact: Watch the funny blooper from Friends, featuring the Girls t-shirt on Rachel played by Jennifer Aniston as she keeps laughing at Lisa Kudrow. Rachel just threw wet paper towels and settled into living with Joey while Phoebe came into the other apartment to convince her to return to Monica’s apartment.

You and your partner can buy an exact replica of the shirt to create an easy Rachel and Monica Couple Halloween costume. Pair it with jeans and you’ll look just like these two!

8 Reasons Why You Should Have A Personal Style