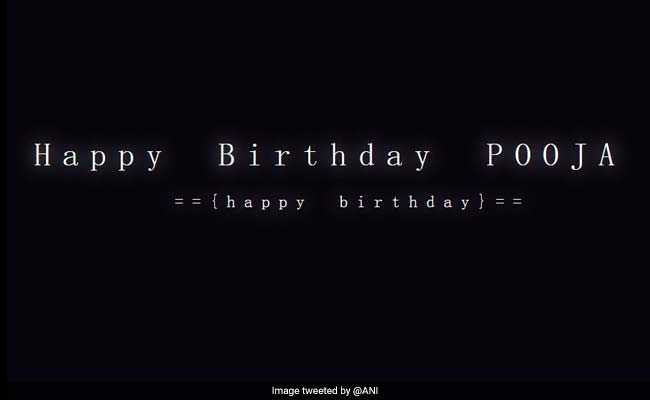 At around 12 am last night, the official website of Delhi’s Jamia Millia Islamia University became the birthday banner of some girl named Pooja. While the simple black-and-white ‘Happy Birthday Pooja’ message flashing on the homepage was pretty and all, it was clear that Jamia’s website had been hacked.

That’s not where the problem ends. If you look close enough, this Pooja’s extravagant birthday wish comes from someone claiming to be her “love”. Twitterati is reminding her that either she is a very lucky girl, or needs to run “very fast”.Twitter reacts by:-

Wow as if there is only one Pooja in entire world. 😂😂
Happy Birthday Btw pic.twitter.com/cwSeG7q3yq
— Godman Chikna (@Madan_Chikna) May 22, 2018

Someone just hacked the Jamia University website. And Pooja: you’re either a very lucky lady or you need to run, very fast. pic.twitter.com/mE824kU8oK

No individual or group has claimed responsibility for the same and the University officials too are yet to comment on the hacking episode.
Currently, the Jamia Millia Islamia University’s website is back up, but Twitter users had a field day on this alarming yet funny development.

So May 22 is Pooja's birthday and now the whole of Jamia knows about it ! Guess how ?
The technical Aashiq has hacked the Jamia Millia Islamia website and wrote #HappyBirthdayPooja on the page ! Impressive isnt it ..cops some cupid work for you guys 😂😂 pic.twitter.com/GY6TdeOwi6

This is really serious..

Really! hope the website is back and clean now, btw lucky Pooja 😀

This was the most hilarious news of the day! 😀