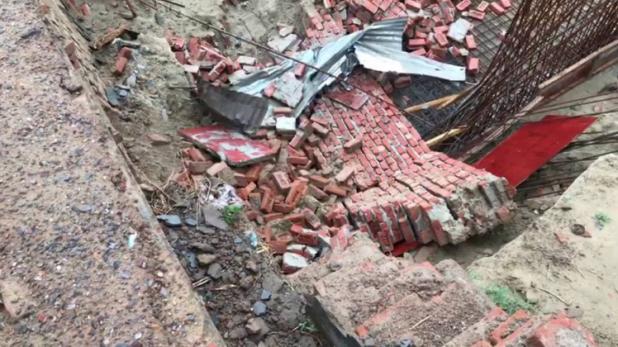 Another construction accident has struck Noida. A labourer and a 4 years old child died after an under-construction wall collapsed on them in Sector 63, Noida. This accident took place in the morning at around 10-11 AM.

The under-construction walls fell on the labourers Kaushalya, Hemraj, Ravi Shankar, and a child Himanshu when they were resting beside the site. This wall was being built opposite to the drain that was running parallel to the FNG service road. The work was under hold when the wall fell over them killing two of them including the child, said the guard Jitendra Kumar to the media.
It was only a week when this wall project started. According to the media reports, rain has been declared as the reason for this fall. Amongst the four of the people who were resting beside the site two died on the spot while others were taken to the private hospital in sector 63, Noida.
According to the detailed news posted by TOI, the two labourers Hemraj and Himanshu died and the other labourers including Prakash, Kaushalya and Ravi Shankar are still struggling for life in the hospital.

Noida has been known for many accidents including the construction site accidents. According to the reports, the heavy rain on Friday was tagged as a reason for the fall of the wall. It also came to light that when this accident took place, the work was not in progress. This accident has killed two people and has driven the other 3 to the hospital beds. Let’s hope the survivors make a full and healthy recovery.
All the construction sites must take it into account and take all the necessary precautionary measures to tackle the monsoon season. This was a bad accident and all other labourers should be careful while working.

Wade In China : Will the Flash Enter the (Red) Dragon?