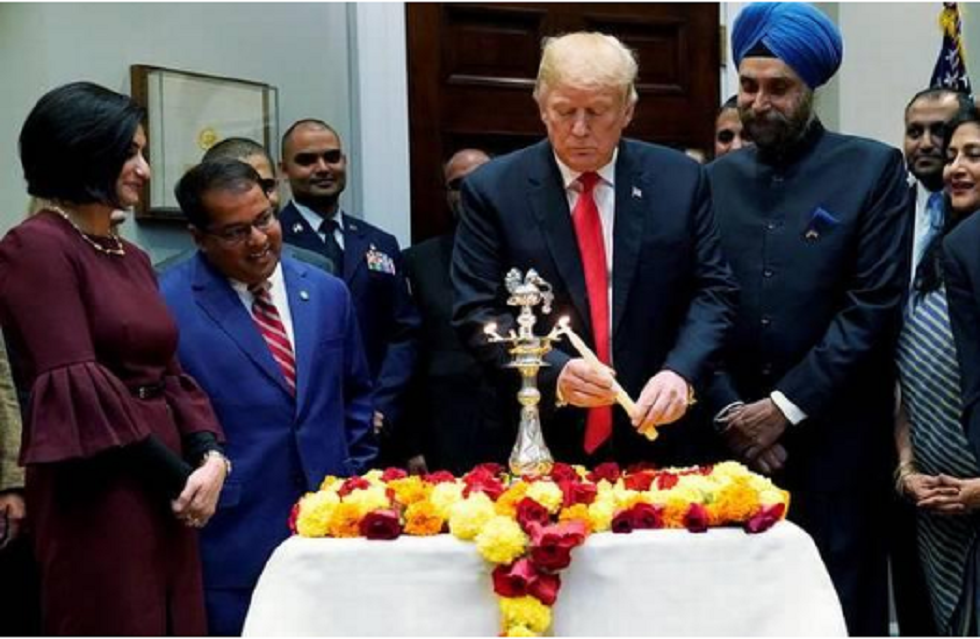 Diwali, also known as Deepavali, is one of the biggest festivals in India. It’s called the festival of lights. Every year, many people and communities celebrate Diwali in India and around the world. It usually takes place between October and November. Various schools, organizations, local gatherings etc engage in the celebration of Diwali. The festival lasts five days and takes place before the new Hindu year. It is celebrated to honour Rama-Chandra. On this day Lord Sri Ram returns to his people after 14 years of exile by triumphing over the demon king Narkasur (Ravan). Every individual celebrating this festival lights up their house to celebrate the victory of good (light) over evil (darkness). It is said that on this day, Goddess Lakshmi pays a visit around the earth at night and enters the houses that are pure, bright and clean. She blesses them health, prosperity and happiness. With the growing Indian population in America, Diwali is very popular and celebrated on various famous US tourist spots such as Times Square, Disneyland which they paint with primary vibrant Indian colours. Even the white house has been celebrating Diwali for many years. All the chirpy localities decorate the places with lights, lanterns, lamps, rituals, fairs, etc.

Diwali in America-Prayer and Rituals

The Indian immigrants are not the only one to celebrate the five-day festival but are also well-liked by different religions making it one of the most celebrated festivals in many towns and cities of America. There are several local temples where a Diwali celebrant offers prayers to their God. This is one of the most important rituals of Diwali where prayers are being offered to Goddess Lakshmi for a better year filled with wealth, peace and success. The puja is being followed by lighting a Diya (oil lamp) in front of the statue with Aarti (prayers) that include chants and hymns to Goddess Lakshmi. To receive her blessings, the devotees clean the statue with the gangajal (holy water) or milk. The puja begins by offering Haldi, Kumkum, flowers, sweets and coconut to the goddess. Many Hindus in America prepare a large vegetarian food and proffer it to Lord Krishna. Across the cities, Langars are being held by the Sikh American who provides free meals to all the people with no distinction to religion or ethnicity. The meal served is vegetarian which includes rice, roti, dal, paneer, kheer, etc. They also distribute sweets after they serve the meal. Sikh temples throughout America hold gatherings to remember their Guru Hargobind’s legacy who fought for social justice and helped in the freedom of people with a different faith. Like every Hindu celebrating Diwali, the Guyanese-American take part in this festival by praying and presenting offerings in the Hawan ceremony at Richmond Hill neighbourhoods of Queens in New York. Hawan is a sacred Hindu ritual in which they make the offerings to the flames by gathering families, relatives and friends.

Decorations and Shopping for diwali in America

Even in America, Diwali celebration begins with the home decoration. There are different ways in which people celebrate and get involved here in America by lighting up the windows in your house or at your office desk with Diya, lanterns or small electric lights. People get their houses cleaned to make it more graceful and pleasing. The decorations include lights, diyas and flowers. These represent lightness and success as they illuminate the whole atmosphere and lift your minds. A major part of this festival is Rangoli, where designs are being created on the ground with coloured rice, petals of flowers, dry flour at the entrance to the house to welcome the Lakshmi goddess. The most exciting part of Diwali is Dhanteras, where gifting your relative is a huge tradition in India and is being followed in America. Therefore, if you have a Hindu colleague, by bringing a packet of sparklers, gifts and sweets to work on the occasion of Diwali to show them you respect in their religious beliefs culture and practices. Exchanging gifts is a way to wish each other a happy and successful year ahead.

Diwali in Times Square is one of the world’s largest celebrations outside of India and a festival which is becoming more common. Since the festival’s introduction in 2013, the time square event has been growing in size and attracting many crowds. It includes dancing, singing, fashion shows, lighting ceremony, photography exhibition and stalls that sell various Indian traditional food and merchandise. Nita Bhasin the president of ASB Communications has been organizing the entire event which included live Indian dance and music and also fireworks and floating lanterns light up in the skies. Neeta Bhasin says that many Indian immigrants sought greater success in America but many people know little about the culture of India. Therefore, she showcased different shows of India’s rich culture, heritage, arts and diversity to the world at the centre of the universe that is Times Square.

The Diwali celebration held at the Disney California Adventure Park in Anaheim, California involves traditional Indian dances and a Bollywood dance party for the guests. Diwali is now a part of the holiday’s festival at the theme park to pay respect to the cultural traditions from around the world.

The San Antonio event is a single night festival, and its co-hosted by the city of San Antonio it showcases Indian splendid culture. The Diwali festival of lights in San Antonio is one of the nation’s largest city-sponsored the celebration with the attendances of over 15,000 people each year. It is the most significant event which is being arranged by the Indian community attracting local and national attention. For many years, the celebration of Diwali includes Bollywood Zumba, Bhangra dance, food, crafts, fireworks and the traditional Diya ceremony in which they release the lighted candle into the San Antonio River along the town’s river walk. Diwali in SA has been a great success for exposure towards the Indian cultures and traditions. It has been inclusive with various VIP guests all over the US which includes the representatives from the US Department of State and the Indian consulate office in Houston, Texas.

Diwali Mela has become very popular in the American cities with a significant Indian population. Organizers host a variety of fun-filled activities such as magic and puppet shows, Heena painting on palms. It also includes food stalls, handicrafts and other trinkets. They also show Fireworks to add the grandeur effect to the festival and to gain public participation. Bursting crackers has been one of the main traditions of Diwali where you will find a variety of crackers lighting up the sky. The firework signifies the return of Rama after defeating king Ravana. In 2007, Satish Gupta the founder Dallas Indian Cultural Society arranged a Diwali Mela celebration at Dallas Cowboys Stadium in Texas. They also call the Mela festival the Spirit of India, which draws over 40,000 people to get a glimpse of the rich Indian culture. It also includes the burning of the Ravana’s sculpture and the staging of Ram-Leela to give a historical outlook to the event. The Diwali Mela is being held annually but with the prior year’s performances, many people are interested in taking part in it.

Diwali celebration in the White house

In 2003, by the demand of the Indian community President George W Bush agreed to do the celebration of Diwali at the white house. He invited several Indian community leaders by which celebrating Diwali became an annual tradition at the white house. The celebration of Diwali brings out the diversification differences in the culture and shows the growing Indian communities in America. In the year 2009, Ex-President Barack Obama was the first president to light the Diya (oil lamp) as a symbolic gesture with the presence of a Hindu priest in the White House ceremony.  During the same year, Obama had also declared Diwali as a holiday in America. Following the same celebration, the current US President Donald Trump also lights the Diya in the Oval Office of the White House with a group of Indian-Americans. He has also greeted the people with warm wishes.

Diwali event by Association of Indians in America (AIA)

The association of Indians in America (AIA) is an oldest not-for-profit organization manages the largest mela outside India with an attendance of over 75,000-100,000 people during the event at the South Street Sea Port Manhattan during the day. The AIA is a full-day event celebrating Indian tradition and culture with authentic Indian cuisine. There are many splendor showcases of Indian culture such as arts, jewellery, clothes alongside carnival for children. At the end of the event, the fireworks are lit up in the sky in New York.

In various universities throughout America, there are about 100,000 Indian students from India. There are also many Indian American students enrolled in American universities. In Duke, Princeton, Howard, Rutgers, Carnegie Mellon and several other university campuses Indian student groups are all gathered together for Diwali celebrations and this helps them to stay connected with their cultures and tradition.

7 Best Video Editing Software That Are Useful for Small Companies