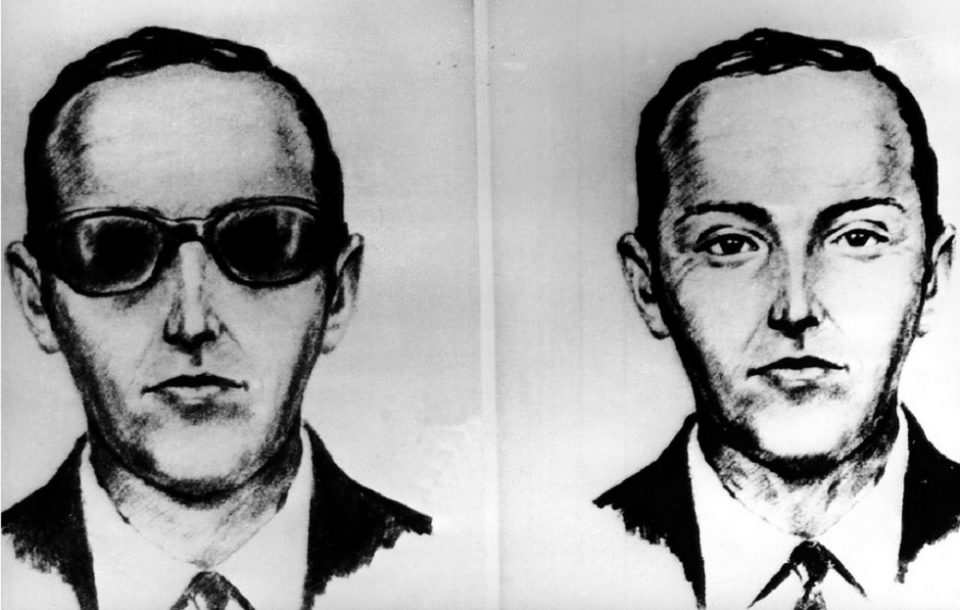 D.B. Cooper, also known as Dan Cooper, is the name given to a criminal who hijacked a commercial airplane in 1971. The plane was on its way from Portland, Oregon, to Seattle. D.B. Cooper has been believed to have jumped out of the plane with the ransom money with the help of a parachute. The hijacker was never officially identified or caught. The failure to identify and catch such a brazen criminal despite an extensive manhunt has resulted in one of the most infamous unsolved mysteries in American history. The man who hijacked the plane used Dan Cooper as an alias. During the course of the reporting of the incident, a reporter misheard the name as D.B. Cooper and it went on to become widely used.

Who was D.B. Cooper?

On November 24, 1971, the day before Thanksgiving, a “nondescript” man who appeared to be in his mid-40s and about 6 feet tall (1.83 metres) bought a $20 ticket for Northwest Orient Airlines Flight 305. He said that his name was Dan Cooper (which proved fake later).

How did D.B. Cooper hijack the flight?

Once the flight took off from Portland, Cooper went on to hand a note to a flight attendant. The note claimed that Cooper had brought a bomb on board. After handing out the note, Cooper opened his briefcase and it contained a red stick, a battery, and numerous wires.

After he convinced everyone that it was a bomb, he demanded for $200,000 in $20 bills ($1.2 million in today’s money). Cooper also asked for four parachutes from the attendants. Once the flight landed in Seattle, authorities agreed to his demands and provided four parachutes along with the $200,000. After that, Cooper released all 36 passengers of the flight safely. However, he continued to hold two pilots, a flight engineer, and a flight attendant hostage. Then he demanded for the plane to be refueled and instructed the pilots to fly to Mexico City, Mexico.  He also instructed the pilots to fly the plane under 10,000 feet and at a slower speed than 200 knots. However, he didn’t intend to stay on the plane till Mexico City. around 8:00 PM, he lowered the rear steps and jumped off the plane somewhere between Seattle and Reno, Nevada. The place where he jumped was also close to Ariel, Washington. After jumping off the plane, DB Cooper disappeared in the wilderness, never to be heard from again.

In the aftermath of this brazen hijacking attempt, the FBI launched one of its longest and most exhaustive investigations ever. The investigation was given the name NORJAK (Northwest Hijacking). Because of the incredible nature of the hijacking, the FBI initially believe that Cooper could’ve had a history in the military, possibly serving as a paratrooper. He was also assumed to be extremely familiar with the area that he jumped in to. However, later revelations led to the “experienced skydiver” theory being dropped as the 10,000-foot jump in the dark was deemed extremely risky and Cooper even failed to notice that his reserve parachute was sewn shut for training purposes. The FBI questioned over 800 suspects in the case but all of them were eventually eliminated. A few of the suspects were eliminated based on the DNA test results from the tie that Cooper took off before jumping off the plane. One of the prime suspects for NOJARK was Richard Floyd McCoy. He was caught for a similar crime as DB Cooper a few months later. However, he was eliminated as a suspect because he didn’t match the physical descriptions given by the two flight attendants. Interestingly, while serving the sentence for his crime, McCoy escaped prison with the help of a fake gun but he was eventually killed in a shootout with the police.

Many people have also speculated that DB Cooper might not have survived the jump. He was not wearing any skydiving gear when he jumped off the plane. He was wearing a business suit, a trenchcoat and loafers. Another factor was the parachute that he used. It didn’t have the functionality for steering and with wind speeds ranging up to 200 miles per hour (322 kph), Cooper might have been blown all over the Pacific Northwest. Another factor that made people speculate that he died was the fact that his landing zone was a rugged, heavily forested area, not ideal as a landing spot at all. The FBI continued to search in vain and after almost a decade of dead-ends, a boy found a decaying package with $5,800 in it. The package was buried along the Columbia River and was situated around 20 miles (32 km) from Ariel, Washington. The package was filled with $20 bills and the serial numbers matched those of the ransom. However, the package couldn’t lead the FBI anywhere in the investigation as nothing else was discovered.

When did the FBI close the D.B. Cooper Case?

The FBI continued to receive anonymous tips over the years but they all ended up being no good. The investigation was officially closed by the FBI in 2016 as the agency decided to redirect its resources to other cases.

As it is with any unsolved mystery, D.B. Cooper’s story also became very popular among Americans. Cooper ended up becoming a sort of folk hero, eventually inspiring numerous songs, books, and movies.

Is there a movie about D.B. Cooper?

The Pursuit of D. B. Cooper is a 1981 American crime thriller film starring Robert Duvall which was loosely based on the exploits of the infamous flight hijacker D.B. Cooper. Cooper escaped with $200,000 after parachuting down from the flight. The majority of the film represents a fictionalized version of D.B. Cooper’s exploits after he landed on the ground.

How much did D.B. Cooper get away with?

He extorted $200,000 in ransom (equivalent to $1,260,000 in 2019) and parachuted to an uncertain fate. Despite an extensive manhunt and protracted FBI investigation, the perpetrator has never been located or identified. It’s the only unsolved case of air piracy in the history of civil aviation.

What is D.B. Cooper’s real name?

D.B. Cooper’s real identity was never revealed. He got on to the plane on November 24th, 1971 under the given name of Dan Cooper. A reporter misheard the name in subsequent press briefings and that gave birth to the name D.B. Cooper. Since he was never caught, his real name never came out.

Was D.B. Cooper A McCoy?

Richard Floyd McCoy was caught for the attempted hijacking of a United Airlines flight in 1972, four months after D.B. Cooper’s hijacking of the Northwest Orient Airlines flight. Because of the strikingly similar modus operandi, the FBI considered McCoy to be a prime suspect of the “D.B. Cooper” case.

What did D.B. Cooper drink?

D.B. Cooper appeared to be in his mid-40s and had a calm, quiet demeanour. He was dressed in a business suit with a black tie and a white shirt. The drink that he ordered before takeoff was a glass of bourbon with soda.

What does D.B. Cooper mean?

D. B. Cooper is a media epithet (actual pseudonym: Dan Cooper) that has been used to describe the unidentified hijacker of a Boeing 727 on November 24, 1971. The brazen hijacker extorted $200,000 in ransom and parachuted to an unknown fate.

Where did D.B. Cooper Jump?

D.B. Cooper jumped off the plane with $200,000 ($1.2 million in today’s money) somewhere between Seattle, Washington, and Reno, Nevada, not very far from the town of Ariel Washington.

Life of Sofia Vergara: Journey from a model to Cancer survivor

Affiliate Marketing – How to Use It for Your Website