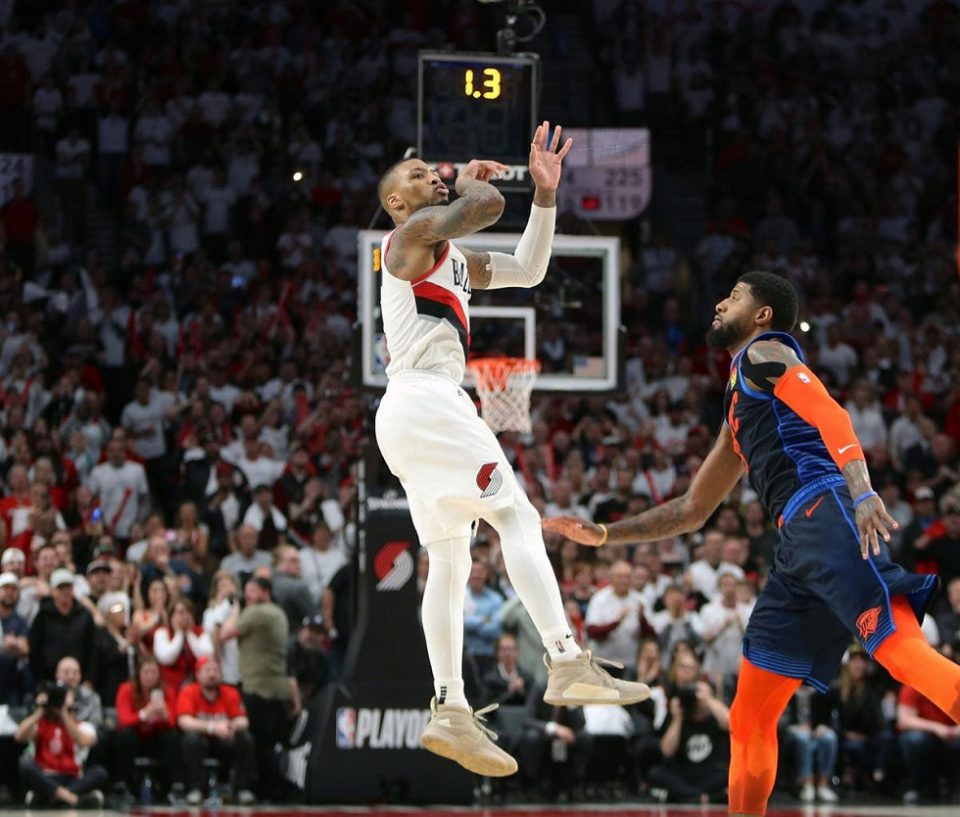 Both of the Thunder’s superstars, Paul George and Russell Westbrook departed from the team after the loss. Westbrook joined forces with James Harden and the Houston Rockets while Paul George joined reigning Finals MVP Kawhi Leonard and the Los Angeles Clippers. After the departure of Kevin Durant from the Golden State Warriors and the injuries to Klay Thompson and Steph Curry, The Los Angeles Clippers were considered the favourites to win the 2019-2020 NBA title. Damian Lillard and the Portland Trailblazers on the other hand, reached the Western Conference Finals last year (before being swept by the Warriors) and were looking to build on that (especially after the return of center Jusuf Nurkic). However, the Trailblazers have struggled throughout the season and are fighting to get the 8th and final playoff spot in the West. That spot will earn the Blazers a first round matchup against LeBron James and the Los Angeles Lakers. The Blazers are currently at the 9th spot, half a game behind the injury riddled Memphis Grizzlies, so they will probably make the playoffs. Damian Lillard has been on a tear during the NBA restart in Orlando. He has averaged 29.1 points and 8 assists per game but just like it has been throughout his career, fans, players and analysts alike have continued to count him out. Even more shockingly, a personal feud erupted on the court between Damian Lillard, Paul George and Patrick Beverley after the Blazers 117-122 loss to the Clippers (a game where Lillard missed two crucial free throws late in the game). The dispute carried on after the game also. It continued in the post-game conference, on social media and now even family members have become involved with it. Let’s find out more about the issue.

How did the Damian Lillard – Paul George dispute start?

Near the end of the Clippers’ 122-117 win, George and Beverley were particularly animated, but Lillard put the pair on ice when asked about them after the loss. Here’s what he said: “Asking me about Patrick Beverley, who I sent him home before at the end of a game. Paul George is a guy sent home by me last year in the playoffs, so they know. The reason they reacting like that is because of what they expecting from me, which is a sign of respect, and it just shows what I have done at a high clip more times than not. I am not offended by it.”

Beverly and George didn’t seem too impressed with Lillard’s comments, with the former posting ‘Cancun on three’ in response, while George wrote ‘and you getting sent home this year, respect’.

Lillard though, who has remained with Portland for his career, took a potshot at George’s history of trade requests in response.

“Keep switching teams … running from the grind. You boys is chumps.”

What have the family members said?

Things have gone from bad to worse as the players’ family members have also become involved in the issue. Damian Lillard’s sister La’Nae Lillard chimed in on the feud and attacked Paul George and his relationship with the Instagram model Daniela Rajic. Swish Daily shared a clip of La’Nae stating the following:

“I said earlier I was going to let that whole Paul George s*** go, and Patrick Beverly, cause everybody know how my mouth is, how my mouth can get,”

Daniela Rajic responded in the comments and said ‘somebody come get this cow’.

What have analysts said about Damian Lillard?

I don’t see it and I haven’t seen it when it really, really counted, and I don’t think the Clippers had seen it either. Because I gotta tell you, they laughed at your man. They clowned your man when he missed the two free throws, then missed the tying three late in that game. They’re over on the bench, their tapping their imaginary watches ‘it’s Dame Time,’ their waving goodbye to him just like the way he waved goodbye to Russell Westbrook and in the end Paul George, he was there, and their waving goodbye to him…

And the great irony of this is the Blazers are the team the Clippers are rooting for to play your team, the Lakers, because it’s obvious, it is painfully obvious, that the Portland Trail Blazers have the best chance, at least on paper, of at least giving your guys a tussle in the first round on the playoffs.”

Skip Bayless continued criticizing Lillard and questioned his ability to lead the team. He cited the fact that Lillard passed up a potential game-tying three in the game against the Boston Celyics. The Blazers went on to lose the game 124-128.  This is what Bayless said: “Damian Lillard disappeared down the stretch of that game… He missed the tying three with 53 seconds left in that game. It came early in the bubble, but the point is: they had em’ and then they didn’t, because that guy has to be that guy down the stretch of these games in the Bubble that are seed games. They should easily be 6-0.”

However, Skip Bayless’ fellow analyst on Undisputed, Hall of Fame Tight End Shannon Sharpe disagreed with him and praised Lillard’s ability and said that his two missed free throws were highly unusual for him and he has usually been clutch. This is what he said:”When you look at Dame, he’s a superstar. I believe he’s a Top 10 player. He’s in my Top 10 for what it’s worth, because he’s big time. He can take and make big shots, he can get to the basket, he’s a great free throw shooter and I’m surprised like everybody else that he missed those two free throws.”

How Can I Tell If My Dog is in Pain?

Spray in Truck Bed Liner vs Drop in Bed Liner