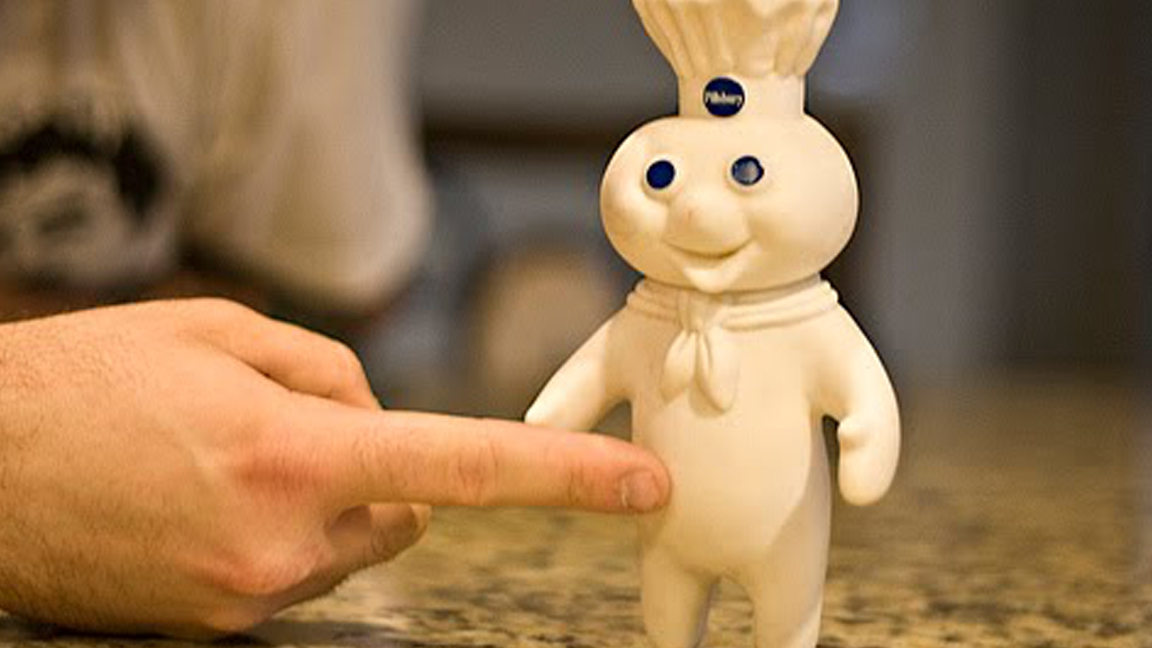 Many people remember the classic ad about a finger poking at the belly of the Pillsbury Doughboy, but did you know that it was CGI back then. The first real human hand to poke the doughboy was in a 1989 campaign. There are also other interesting things about how the doughboy came to become the (computerized) face of one heck of an ad campaign!
Here’s one: the real name of the pillsbury doughboy is Poppin’ Fresh.

But all this goodness had to start somewhere and that’s what we uncover in this article.

The company began in 1869 in Minneapolis after the invention of steel rollers to mill flour.

If you’ve seen the ad, the cute figure let’s out a hoo-hoo with a giggle but earlier on the doughboy used to respond with a slight giggle “tee hee” when pocked.

Before the company became famous for its Bake Offs, Crescent Rolls and the obvious Pillsbury Doughboy it had its humble beginnings in the flour business.

The founder Charles Pillsbury had only graduated from Dartmouth for 6 years after moving to Minneapolis. With experience in working in his uncle’s flour mill, Pillsbury realized that he could make the flour milling process more efficient by using steel rollers rather than buhr stones to mill the grain into flour.

In 1872, he convinced both his uncle and his father to join his company “Charles A. Pillsbury & Co”. In 10 years his business had boomed, and the Pillsbury’s mill was the largest in the world.  When he died in 1899, the advertisements we have come to love, sadly couldn’t be seen by the man. But since his company was sold and diversified a couple of times his son, Charles S. Pillsbury, and grandson Phillip, the leadership and management positions stayed within the family through

Bake Off contests were very popular in 1949

The first ever of the Pillsbury Bake-Off Contest began as a big deal as Eleanor Roosevelt handed out the awards at New York’s Waldorf-Astoria hotel.

Back in 1949 Theodora Smallfield won $50,000 in the first Pillsbury Bake-Off Contest because she wrapped a tea towel around the dough to make her “No-Knead Water-Rising Twists.”  Compare this to the most recent Bake-Off contest in 2014, when Virginia’s Beth Royals won $1 million for her recipe for Peanutty Pie Crust Clusters and you’ll see the revenue (and growth) Pillsbury created since then.

Poppin Fresh vs Jonathan vs Pillsbury Doughboy in 1965

Speaking of revenue, back in the 1950s, Pillsbury had its name on only 5 products. By 1963, the Pillsbury name has appeared on 127 different products! They started focusing on dry goods like flour, cake mixes, biscuit mixes, pasta, and other similar items which could be stored in a refrigerator which almost all households had by this time.

Poppin Fresh might sound a little strange to add to flour, cake or pasta. But the story behind this name began in 1965 when a new product, the refrigerated crescent rolls whose dough was to come in a tube. This tube could be hit on the edge of something like a table or counter edge and OUT popped a ready to bake roll.

Poppin Fresh was named after the popping sound Pillsbury biscuit containers make when opening them.

He was created by Rudy Perz, Carol H. Williams and a copywriter for Pillsbury’s longtime advertising agency Leo Burnett. As Rudy or Rudolph Perz sat in his kitchen in the 1965, under pressure to create an ads for Pillsbury’s frozen dough product line (biscuits, dinner rolls, sweet rolls, and cookies).

Rudy’s copywriter, Carol H. Williams, imagined a living doughboy popping out of Pillsbury Crescent Rolls can and wrote the campaign, “Say Hello to Poppin’ Fresh Dough“. Originally called “Jonathan Pillsbury,” the dough character was a boy who wore a scarf, a chef’s hat and had two big blue eyes to distinguish him from the rolls. He also had a toy-like characteristic of a blush and a soft, warm chuckle when poked in the stomach. In the end, the ad agency’s founder, Leo Burnett thought the character was a great idea, as did Pillsbury!

By November 1965, the first Poppin’ Fresh commercials started to air. Perz originally conceived the Doughboy as an animated figure who was a three-dimensional Doughboy puppet then created at a cost of $16,000.

Voice actor Paul Frees was chosen to be Poppin Fresh’s voice. The story goes that more than 50 actors auditioned for the voice of the Doughboy. Paul Frees, the voice of Boris Badenov in “The Adventures of Rocky and Bullwinkle” among others was chosen.

The first dialogues were,“Hi! I’m Poppin’ Fresh, the Pillsbury Doughboy,” followed by “Nothin’ says lovin’ like bakin’ in the oven, and Pillsbury says it best.” When Frees died in 1986, Jeff Bergman, the voice of Charlie the Tuna, took over. Currently, JoBe Cerny portrays the Doughboy.

Pillsbury has used Poppin’ Fresh in more than 600 commercials for upwards of fifty products. In addition to Mastercard commercial, with the Jolly Green Giant, Morton Salt Girl, Vlasic stork, Count Chocula, Got Milk?,  the GEICO insurance company and a cameo appearance in the 1987 claymation film The Puppetoon Movie.

Hits and misses of the past

During the 1950s, Pillsbury released boxes of brownie mix and frosting mix, which appealed to amateur home cooks who could use the packaged mixes to save time and hassle in the kitchen.

For children of the 1960s, Pillsbury started selling cans of spreadable (wet) frosting as well as Funny Face Drink Mix, meant to compete with Kool-Aid’s powdered drink mixes. Now politically incorrectness did exist because a couple of the names and packaging of the powdered drink mix—with flavors such as Loud-Mouth Lime, Goofy Grape, and Rootin’ Tootin’ Raspberry—were considered kind of offense, and Pillsbury eventually has to rename Chinese Cherry to Choo-Choo Cherry and Injun Orange to Jolly Olly Orange.

Also in 1960, Pillsbury introduced a powdered drink mix called Moo Juice, which made a milkshake when you added milk to it and shook. Moo Juice came in flavours like vanilla, chocolate, strawberry, and chocolate malt, but it made a watery milkshake which didn’t taste as good as other powdered dessert drinks on the market.

And naturally by 1970, Pillsbury stopped producing and selling Moo Juice.

The Pillsbury Doughboy was a family man in 1970’s

According to General Mills’ history of the character, Poppin’ Fresh is a family man who is married to his wife: Poppie Fresh. She was introduced in February of 1973. He has a son named Popper and a daughter named Bun-Bun, as well as a dog (Flapjack) and a cat (Biscuit), all of whom were introduced in 1974.

Yes it is the reason that the Pillsbury Playthings line was formed. In 1972, the vinyl Poppin’ Fresh doll was quickly becoming one of the fastest selling toys in the United States.

Grandparents Granmommer and Granpopper were also advertised (see toy above).  In 1991 there was a commercial for Pillsbury crescent rolls where an unnamed mother appears, but we only see her arms as she serves him the rolls. Collectors still buy the doughboy family which was sold as dolls individually and in the form of various playsets.

While they were developing refrigerated food, a pillsbury scientist Dr. Howard Bauman was developed edible cubes for astronauts to eat in space in 1960. The food scientist was successful as an astronaut Scott Carpenter became the first person to eat solid food in space when ate these small cubes of figs, chocolate, dates, and high-protein cereals aboard the Aurora 7 in 1962.

From the 70s to the 80s, Pillsbury advertised their mission for space food sticks for the non-astronaut public. They sold them as a fun little snacks that provide energy in the form of carbohydrates and protein, and the sticks came in flavors such as chocolate, peanut butter, mint, orange, and caramel.

The finger poke was all CGI

Pre CGI in 1992, the doughboy was created in stop-motion format. Perz originally didn’t want it in a stop motion after he conceived the Doughboy as an animated figure. However, he changed his mind after seeing a stop motion titling technique used in the opening credits for The Dinah Shore Show.

The original clay 3-D model of the doughboy cost $16,000, with five different bodies and 15 heads to create and bring him to life

It was also pretty time consuming as a 30-second television spot required 720 photographs, or 24 pictures per second to make one second of animation. By the early ‘90s,  CGI was becoming more popular and available and in 1992, Poppin’ Fresh switched over from stop-motion to computer animation.

The famous hand that pokes the doughboy’s belly was fully computer-generated until new technology arose. The first real human hand to poke the doughboy appeared in a 1989 campaign.

Pillsbury used to own Häagen-Dazs and Burger King until 2000s

In 1967, the Pillsbury Company acquired the then-13-year-old Burger King chain for $18 million.

Later in 1983, it bought the premium ice cream brand Häagen-Dazs directly from Reuben Mattus, the company’s founder. But after these series of acquisitions, General Mills ended up acquired Pillsbury in 2000. Sadly, Pillsbury no longer exercises direct control as the parent company over either Burger King or Häagen-Dazs.

Years later, the Pillsbury Doughboy and his trademark white chubby body is a cultural phenomenon appearing in advertisements and guest-starred in a 2017 GEICO commercial. “How happy are folks who save hundreds of dollar switching to GEICO?,  I’d say happier than the Pillsbury Doughboy on his way to a baking convention.”

He still looks more or less the same as he did more than 50 years ago, and his personality has remained constant during all those years as well. Observed Charlie Hopper of ad shop Young & Laramore to AdWeek in 2015, “The Pillsbury Doughboy lives in a kind of cultural permanence category in people’s minds, like Mickey Mouse because the doughboy comes in and says his spiel with the same sincerity he had when we were kids. This familiar face gives us the warm feeling of cosy homes from a time long gone but the message of fresh warm food maintains Poppin’ Fresh’s  long lasting appeal.

Invest in Your Future Early at 25

What Do I Want For Christmas: Dailyhawker's Guide To Your Christmas Wish list