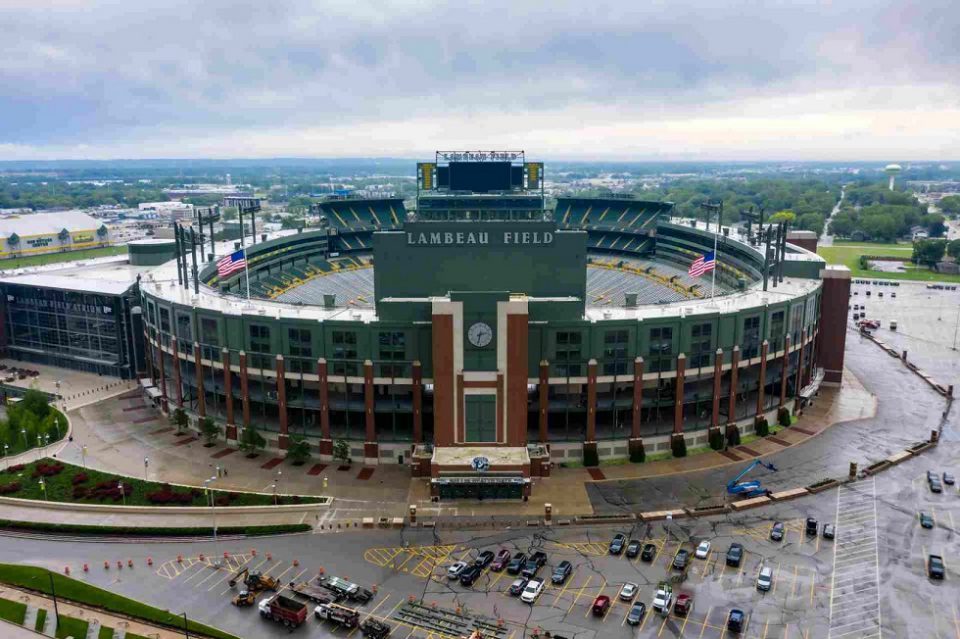 Around the globe, sports stadiums are cherished as much as the team and players that play in them. Football, soccer, basketball, it doesn’t matter, the stadium holds a special place in every fan’s heart.

This post will go through some of the best stadiums in the NFL, what makes them so great, and why hundreds of thousands of fans make their way to them each and every season to cheer on their favorite team.

Lambeau Stadium has been home to the Green Bay Packers since 1957. It has been the ground that the Packers have made runs to 15 division titles, nine conference titles, and 4 Super Bowl titles.

It has undergone a number of renovations over the years, as expansion has been a necessity almost since it first opened, however, some of the original brick work has been preserved as a reminder of the history of this great stadium.

There is one aspect of it that really sets it apart from every other stadium on this list, the Lambeau Leap. If there was only one thing you would remember about a trip to Lambeau, it would be a Packers player flying into the stands after a touchdown, a serious tradition that is hard to match.

Lumen Field is one of the newer stadiums on this list, and has been the home of the Seattle Seahawks since 2002. The stadium has also broken two Guinness World Records for the loudest crowd noise at an outdoor stadium.

The stadium itself is also located in downtown Seattle, right around restaurants and bars, and is very easy to travel to, making the atmosphere before and after games electric, as most fans will spend the day in and around the stadium before kick off.

Heinz Field is where you will find the Pittsburgh Steelers and first opened back in 2001. Much like Lumen Field, Heinz Field is situated in downtown Pittsburgh, once again surrounded by bars and restaurants. The city is also famous for its tailgating culture, making the hours before the game some of the best in the league.

The atmosphere in the stadium is also hard to match, every home game has been a sell-out since opening, barring the past season with the current pandemic. Traditions include the unfurling of the Terrible Towels, and Renegade by Styx being blasted over the stadium speakers before kick-off.

There is probably no better stadium that combines grilling, meat, eating and football, than Arrowhead Stadium. Home to the Kansas City Chiefs, it is found in the Truman Sports Complex, where you will also find the Kansas City Royals baseball diamond.

Chiefs fans also broke the record for the loudest crowd noise back in 2014 during a game against the Patriots. While the stadium is only really surrounded by freeways, the seemingly never ending tailgating and grilling, combined with famously raucous fans ensures an incredible day at the game.

AT&T Stadium has been the home of the Dallas Cowboys since 2009, and holda an astonishing 80,000 people, or 105,000 if you include the standing room. AT&T is most definitely one of the most multi-purpose stadiums on this list.

It has played host to boxing fights, professional wrestling, motocross, rodeos, concerts, basketball and soccer games, and many other events. Not only that, but the enormous screen that hangs from the ceiling from one 20-yard line to the other gives fans, no matter where they are seated, an up close and personal view of the game.

Allegiant Stadium may be the newest and the only stadium that hasn’t been able to play host to a full crowd yet, however, it is on this list simply due to its potential. It is located west of Mandalay Bay and can host up to 72,000 people.

Raiders fans are most definitely an intense lot, and once this stadium can play host to a sold out game, it will almost definitely become a fan favorite. You can’t go wrong mixing a state of the art stadium, football and Vegas.

The Vikings stronghold since 2013, U.S Bank Stadium has a massive viking ship outside its front doors, and is located in the hustle and bustle of downtown Minneapolis. While the stadium itself isn’t too special, it is the atmosphere that is the massive selling point.

Vikings fans are loud and passionate, rain or shine, sun or snow, the incredibly loud “Skol” chants will imminent out the stadium on game day and is most definitely one of the stadiums where you will have the best time and the most fun, whether you support the Vikings or not. It is still a young stadium, and history is still going to be made here.

No matter who you support, the NFL is home to some of the best stadiums in the world, and there are a most definitely at least a dozen that you should visit on game day at least once in your life, you won’t be disappointed.