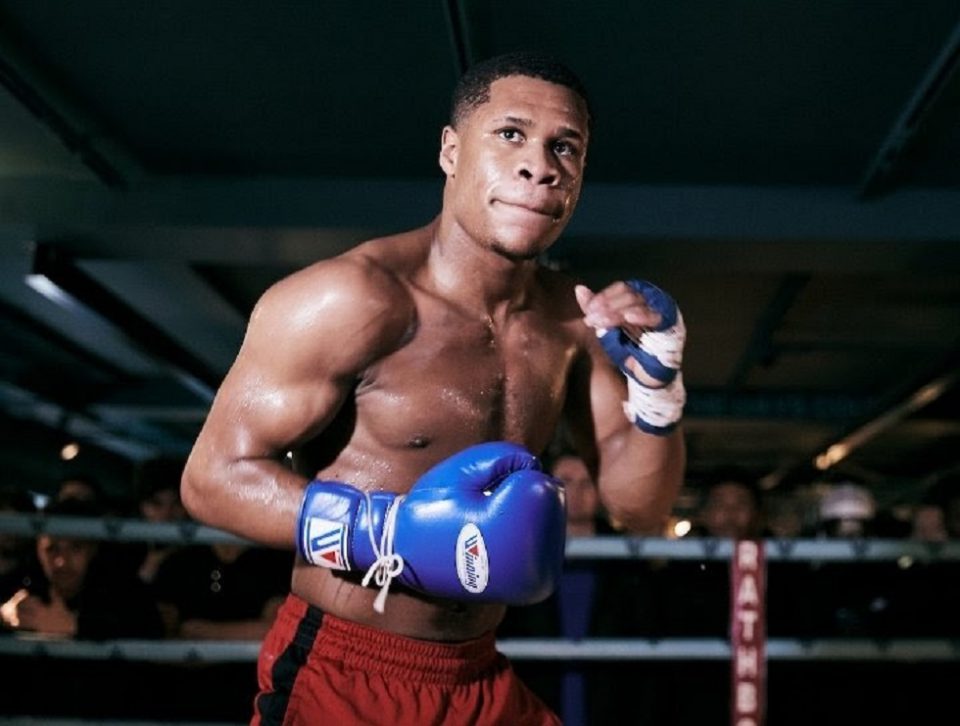 Devin Haney is a young and famous American professional lightweight boxer. The 19 year old has held the WBC lightweight belt since November 2019 and has been ranked the third best active lightweight boxer by The RIng Magazine. Making history as the youngest boxer to fight at the MGM hotel in Las Vegas, Devin Haney began his career undefeated and would win the Youth World Championships in 2015, the youngest ever to accomplish such a feat. He has been nicknamed  The Dream.

Before he rose to fame as a professional boxer, during his amateur career, he became a seven-time national champion to go with his record of 130 wins to 8 losses. He became the youngest member of the USA Junior National Boxing Team when he was 14 years old. He won a bronze medal in Russia and took home gold in the Dominican Republic.

Devin Haney: All You Need to Know

When was Devin Haney born?

What stance does Devin Haney use?

What is Devin Haney’s nickname?

Devin Haney’s nickname is The Dream.

Which weight class does Devin Haney fight in?

As an amateur, Haney won seven National titles. In January 2015, Devin Haney went on to become the youngest ever Youth World Champion during the tournament held in Reno, Nevada, USA.In January 2015, aged 17, he became the youngest boxer to win the Youth World Championships in Reno. He had an amateur record of 138–8 bouts before turning professional in 2015 at the age of 17.

After a glorious Amateur career in which he went 138-8, Devin Haney turned professional at the age of 17.

Devin Haney turned professional at the age of 16 but couldn’t compete in the USA because of the minimum age restrictions. Consequently, his first four fights were organized in Mexico. At As a professional, he won the following titles at the regional level: WBC Youth, IBF-USBA, IBF North American, WBC International, WBO Inter-Continental and WBA International lightweight titles as a professional.

On February 2, 2018 Devin Haney was scheduled to square up in the ring against Filipino Harmonito Dela Torre in an eight-round opening bout. However, the Filipino fighter failed to get his visa and subsequently withdrew from the fight. The organizers were unable to find a replacement and the fight was dropped.

In April 2019, Devin Haney signed with British promoter Eddie Hearn’s Matchroom Boxing as a part of a co-promotional deal with his own firm, Devin Haney Promotions. Devin Haney defeated Zaur Abdulaev (11-0) in January 2019 in the battle for the WBC interim lightweight title. Soon after that, Haney went on to become the youngest boxing world champion after being elevated as the WBC lightweight champion. This was triggered by previous WBC lightweight champion Vasyl Lomachenko being promoted to “Franchise Champion” by the WBC. On the undercard of KSI vs. Logan Paul II in November 2019, Haney made his first title defense against Alfredo Santiago (12-0), and won by unanimous decision. Devin Haney suffered an injury to his shoulder during the fight. The injury required surgery to heal and it has kept him out of action since then. During that time, Devin Haney kept the title of “champion in recess.”

WHile the whole world seems to be smitten by the incredible skill of Vasyl Lomachenko, Devin Haney doesn’t seem to be very intimidated by the Ukrainian. When asked if he could beat the Franchise Champion Lomachenko in a fight and “end the hype of Loma”, Haney said this to 78Sports TV:”I’ll tell you this. I will never lose to a white boy in my life. I don’t care what nobody got to say. Fight a white boy 10 times, I’m going to beat him 10 times.” Haney was criticized for this comment, with many saying it was anti-white racism. Haney came out on Twitter after and said, “I’m not racist and I never will be a racist. I’m chasing greatness.” He also talked about the conversation he had with WBC president Mauricio Sulaimán and “confirmed to him directly my commitment to be a role model and my absolute rejection of discrimination of any kind.” Devin Haney’s ridiculous comments have been compared to Bernard Hopkins’ declaration that he would “never let a white boy beat me”. He made that declaration before his fight with Joe Calzaghe, a “white boy”. Unfortunately, Hopkins went on to lose that fight.

Who is Devin Haney dating?

He and his father moved to Las Vegas, Nevada when he was just seven years old. He began dating model and entrepreneur Blac Chyna in the summer of 2018. The 11 year age difference between the couple caused a lot of controversies and mockery in the press. Haney and Blac  broke up pretty soon though. As of 2020, Devin Haney is dating Big Gigi. Their relationship started in January 2019. The couple has been living a lavish lifestyle and is enjoying traveling to various places. Big Gigi has a daughter Emoniee Gisselle. She had Emoniee from her previous relationship whose details are still unclear and she hasn’t revealed anything as well.

He was trained as a boxer by Floyd Mayweather Sr. Devin Haney is currently trained by his own father.

What is Devin Haney’s Net Worth?

The 21-years-old is starting his career and has risen to fame in four years of his professional career and reached great heights in the boxing industry. The young and talented Miles has collected a worthy sum of amount through his fighting career. The reported net worth of the professional boxer is a whopping $5 million. He is living a fancy and lavish lifestyle with all the fight purse that he has collected in his 24 bouts (he is still undefeated).

Haney started his own promotional company Devin Haney Promotions and in 2019 signed a promotional deal with Eddie Hearn and Matchroom Sports. Devin has signed a contract with DAZN, which has been trying to sign a contract with American talent to promote their new app. The multimillion-dollar contract has been signed but the details of the contract are yet to be opened to the public.

His recent fight purse in the KSI vs Logan Paul fight card was $1 million against Alfredo Santiago. That was even higher than the KSI and Paul’s fight purse of $900,000 which was held on November 9th 2019 at the Staples Center, Los Angeles, California, U.S.

His 21st birthday gift was a Lamborghini Urus which was bought as a gift by his father that cost around $250,000 dollars.

The 5′ 8” lightweight boxer also receives sponsorship and brand deals that add value to his net worth. Haney is also sponsored by WEDM Recovery.

The boxing industry is rallying against Devin Haney after the 21-year-old American said he’d never let a “white boy” beat him.

The WBC lightweight champion Devin Haney made the comments during a 78SportsTV live stream on YouTube this week, which involved a fan-led Q&A.

As Haney competes in the talent-rich 135-pound weight class, he was asked about a potential match against the athletic Ukrainian fighter Vasyl Lomachenko — a former two-time Olympic gold medalist and Insider’s No.2-ranked boxer in the world today. This is what Devin Haney had to say on the issue:

“I’ll tell you this, I’ll never lose to a white boy in my life, I don’t care what nobody got to say. Ain’t no white boy who can beat me any day of the week. Fight a white boy 10 times, I’m gonna beat him 10 times.”

“The double standards are real and disgusting. There’s no room for any of it. It’s uncalled for. Our beloved sport has enough goddamn issues.”

Lou DiBella, the president of boxing events firm DiBella Entertainment, tweeted that he did not think Haney’s intended to be hateful, but that the sport can do without “racial s—.”

He even referenced a 2008 fight between Joe Calzaghe and Bernard Hopkins. The American middleweight had said in 2007 that he would never be allowed back into the hood if he let a white guy beat him. Within a year, Calzaghe, who is white, had defeated him.

DiBella said: [Haney] has superb skills. Don’t think the comment was meant to be hateful. It was just ego and an ill-advised stereotyping of styles. Stereotypes are misleading. Just watch Bernard vs. Calzaghe.

He added: We can do without the racial s— … just unnecessary and provocative of biased negativity. And, not for nothing, Lomachenko has better footwork, faster feet, and is a better dancer than just about every fighter on the rainbow of skin color or tone.”

The renowned YouTube content creator Radio Rahim, who specializes in boxing coverage, said “black people get more leeway” on comments like this and that if it were a white fighter who said the same of a black fighter, then it would be called “racist and unacceptable.”

On the Seconds Out channel, Radio Rahim said: “I’m not saying a white boy can beat you, or, if he does, he beats you because he’s a white boy. Or, if you win, it’s because you’re a black guy.

“What I’m saying is … you don’t want to be calling out all white boys at the same time! If you make it a race thing, that nobody in this race can beat you, you just up everybody’s game in that race by two times.”

Radio Rahim added: “Black people will get more leeway on this. A white boy cannot say, ‘No black boy is going to beat me.’ We’d be having a different conversation. ‘That is racist, unacceptable.'”

Radio Rahim then said Haney’s comments come from the Floyd Mayweather playbook. When Mayweather became a box office attraction, he had developed an impenetrable defensive system that was not always TV-friendly.

However, people tuned in to see him because he reveled in the role of the bad guy.

“Haney comes from the generation after Floyd [Mayweather], who grew up idolizing the Mayweather style,” Radio Rahim said. “To be the bad guy, the villain, or [the one who] says the thing you’re not supposed to say … it sells tickets.”

Haney has been likened to Mayweather before, he recently posed with huge stacks of cash on Instagram like Mayweather has done, and in a Twitter clarification of his remarks he posted a photo of himself alongside Mayweather.

“I’m not racist and I never will be a racist,” Devin Haney said. “I’m chasing greatness.”

So that was a brief snapshot of the young and extremely successful career of lightweight boxing superstar Devin Haney. He has already achieved so much at a ripe young age of 19. With many good years of boxing left, the sky’s the limit for Devin Haney.