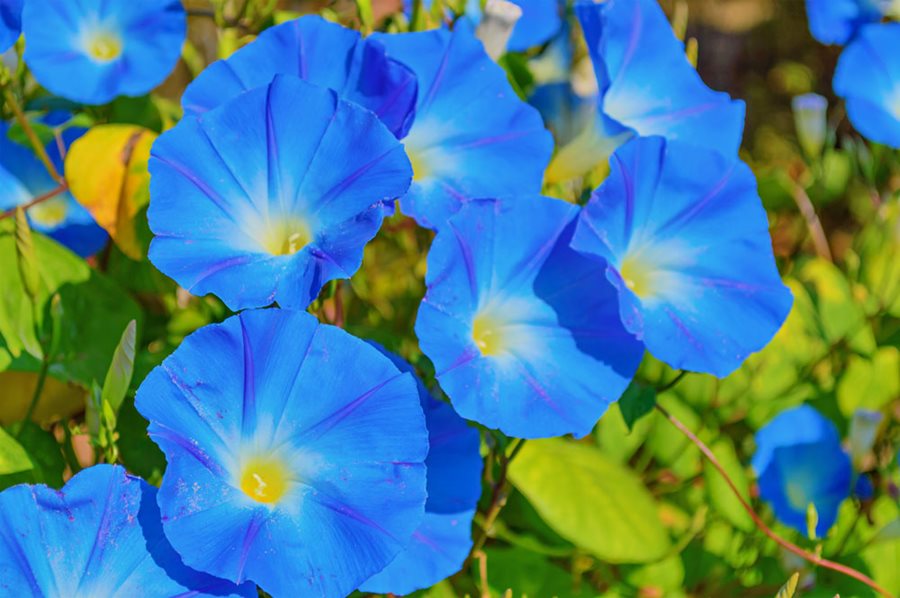 Why Are Blue Flowers So Rare?

Blue flowers are rare as the colour blue is seen on only 10 percent of the 280,000 flowering plants on Earth. Among those who specialize in color analysis, it is sometimes claimed that, in reality, there have never been true blue flowers, nor will there ever be one. This has to do with the fact that there is no blue pigment in the plant kingdom and colors that appear to be blue are actually permutations of violet or purple.

The first blue chrysanthemum was invented with the help of genes from a deep-blue butterfly pea (Clitoria ternatea) and the purplish Canterbury bells (Campanula medium). The genes of these two plants were combined then spliced into the DNA of Agrobacterium tumefaciens, a type of soil-dwelling bacteria that is known for its capacity to infect and alter the DNA in the nuclei of plant cells. The infecting bacteria altered the DNA of a magenta chrysanthemum, and the seeds of that plant produced the long-anticipated blue flowers.

16 Rarest Blue Flowers In The World

The Blue Fringed Daisies are one of the rarest blue flowers. They are named so because it looks like fringe surrounded by a yellow and green center.

The researchers from Japanese & Australian companies named Suntory and Florigene respectively took 14 years to create the world’s first Blue Rose. Thanks to a Japanese plant breeding project that took 14 years to produce the desired result, a version of the most popular flower was finally developed that, as determined by England’s Royal Horticultural Society, was officially blue, even if hacking was involved in its creation. To qualify as authentically blue, a flower, when facing north, must meet certain blue standards as displayed on a highly nuanced color chart. The 14-year flower-in-the-making that met these standards was a chrysanthemum. This breakthrough could have major implications for the florist industry since chrysanthemums are, after roses, the most widely sold cut flowers.

The jade vine has a very interesting bluish, mint green color. This beautiful flower is native to the rainforests of the Philippines where it hangs down to around 3 feet in length. Funnily, this type of blue flowers are a member of the pea and bean family. However, deforestation has destroyed its habitat, and the plant is now considered endangered. The jade vine is difficult to grow in captivity due to the lack of its natural pollinator, bats.

Bellflowers are the charming starry or bell-shaped flowers, which relate to the realm of fairies and are also referred to as “fairy thimbles.”

The shades of Blue Hydrangeas vary according to the alkalinity of the soil making it one of the rarest blue flowers.

Aster comes in beautiful shades of red, purple, blue, yellow, white, and pink, which is the last plant to bloom in a year. It is also known to have healing properties. In ancient times, people used to believe that burning aster flower leaves would drive away evil forces.

Morning Glory is a saucer-shaped blue flower, which is named as morning glory because the flower blooms during the day and dies by evening. They are widely used for ornamental purposes in weddings and celebrations.

Violets are edible flowers whose essence is often used in desserts while petals are used to decorate desserts and salads.

In the medieval time, Blue Impatiens flower was called ‘Our Lady’s Earring’ as it symbolizes motherly love and affection.

Forget Me Not is a pretty little blue flower with yellow stamens that blooms mainly in summer. In the 15th century, it was believed that the wearers of this flower would not be forgotten by their lovers.

The Bachelor Button flower is the national flower of Poland. In the old days, bachelors would wear this flower to indicate their love for their beloved.

Blue Gentian is one of the rarest blue flowers in the world. You should look out for these unique flowers on your next trip to Europe as these are prevalent only in Europe.

The Ipomoea flower opens up its petals every dawn to welcome the new day and perishes before noon.

The Blue Dandelions are native to Europe & Asia, which are now available widely across the world.

This unique and beautiful bulb-shaped blue flower, which grows in clusters in mid-spring.

Are there any real blue flowers?﻿

Many kinds of flowering plants do not include any blue-flowering varieties, though people go to great lengths to create them. The color blue that we see every day in the sky doesn’t come easily because a true blue pigment doesn’t exist in plants. Among all the purples, violets and reds, some naturally blue flowers are also present.

The main ingredient for making blue flowers are the red anthocyanin pigments. Plants modify this pigment to make blue flowers. The process of modification involves pH shifts and mixing of pigments, ions, and molecules.

Blue is the rarest flower color, seen on only 10 percent of the 280,000 flowering plants on Earth. This has to do with the fact that there is no blue pigment in the plant or flora kingdom on Earth. The colors that appear to be “blue” are actually permutations of violet or purple!

﻿What kind of flowers are naturally blue?

Roses do not naturally occur in blue as they lack the anthocyanidin pigment delphinidin, which is the cause of blue colors in flowers. No amount of hybridization or cross-breeding of roses can result in a true blue rose. It’s not a matter of uncovering a recessive gene. There is no gene for blue. Blue flowers such as blue roses are so rare.

The blue flowers mentioned are the rarest flowers found in the world that are a romantic gift to represent love, desire, and inspiration. According to the colour analysis specialists, natural blue flowers are such rarities, that these plants cannot naturally produce blue flowers.

The plant breeders dye white flowers to produce blue flowers. The first involves dissolving food coloring in water and having the stems of your cut flowers, which should be white, absorb the colored water. However, the technique of getting blue flowers this way is not impressive. There is definitely blue coloration in the flowers but it is weak and white is still plentiful in the final product.

A second technique uses a special powder that is dissolved in water prior to placement of the stems. Using this method, the results showed strong sky blue flowers that are satisfying and beautiful.

However, if you want to see royal blue coloration, you will need to utilize a third technique involving a dye into which the flowers are dipped, which has the advantage of giving you instant results. Powders and dyes for floral coloring are available in a variety of colors, and they are easily procured through internet vendors.

Best Tips for Runners: Boost Up Your Energy