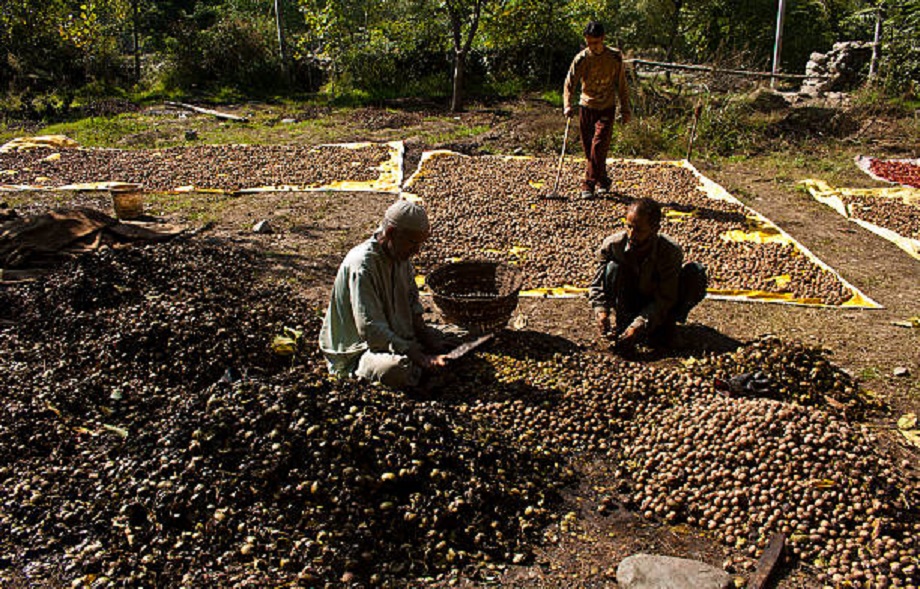 Jammu and Kashmir walnut industry lost cores of rupees from the last two years. Kashmir consists of about 4000 walnut growers and land under walnut in the whole state is about 89,000 hectares.
According to an estimate, the state Jammu and Kashmir produce about 3.5 lakh quintals of walnut which contributes about 98 per cent walnut production in India. From this, Kashmir division is the major producer of walnut in the state where 95 per cent of walnut production comes. Major areas of production in Kashmir are; Kupwara, Pulwama, Ganderbal, Anantnag and Budgam.
Most of the walnut that comes from the state of Jammu and Kashmir is exported to European countries.

Machines required for walnut are to be imported from outside the state. The machines are not locally available, which can help in increasing the process of grading, drying of walnuts.
Walnut fruit is easy to get affected by diseases if the outer layer of walnut is not removed as soon as the fruit is obtained from walnut trees. It is a delicate fruit.
There is not any regulation of rates at its peak season. Since in the month of September October walnuts are obtained from trees. Suddenly the rates go up and down.

There is not even a local market available for the export of the fruit. Government is not making arrangements to provide the growers of walnut a local Mandi, there are a number of schemes which were launched for walnut by Jammu Kashmir Entrepreneurship Development has launched for the walnut product such seed Capital Fund Scheme and Youth Start-up Loan Scheme.
Due to the absence of a local market large quantities of fruit gets destroyed on the way reaching the fruit Mandi Jammu. Out of the total production of walnut in the state 10-15percent is locally consumed rest is exported outside the state.
The Kernel of walnut grown in the state is delicious but lacks the white shine this is also an important factor affecting the price as well as had brought down the market of walnut outside the state.

“I am doing this business from last 22 to 25 years. But from last some years we suffered heavy loss due to the low price of walnut in the market,” said Fayaz Ahmad Lone a local walnut trader from Kulgam.

According to a survey by Agriculture and Food processing Export Development Authority of India (APEDA), there are 336 processing units of walnut in the state but the requirement is about 6181 according to production.
The growing of walnut trees is of traditional and is not according to standards of the modern cultivation. An average walnut tree gives fruits from 10-15 years of age, which is a major hindrance in the development of this industry. After the apple, walnut is the largest fruit industry of the state.

We urge the government to provide us dry fruit Mandi within Kashmir so that the losses which we suffer outside the should be minimized,” said another walnut trader Mohammad Yousuf Mir

There are many other states in India where walnut is grown, but the walnut grown from the state has a fine quality and is much demand in the international market.
“Government is not giving much importance to walnut industry in Kashmir as compared to other industries. Horticulture department of Jammu and Kashmir state do not give advice and assistance to farmers belong to walnut industry, that is why this industry suffered heavy losses from last four years,” said Haji Bahadur Khan President Dry Fruits Association Kashmir.
“Another big problem is that no tax was imposed on import of walnut, now we hope that this year government would impose 100 per cent tax on import of walnut from Chile and California,” Khan Further added.
Walnut product is organic in nature and does not require fertilizers and sprays.