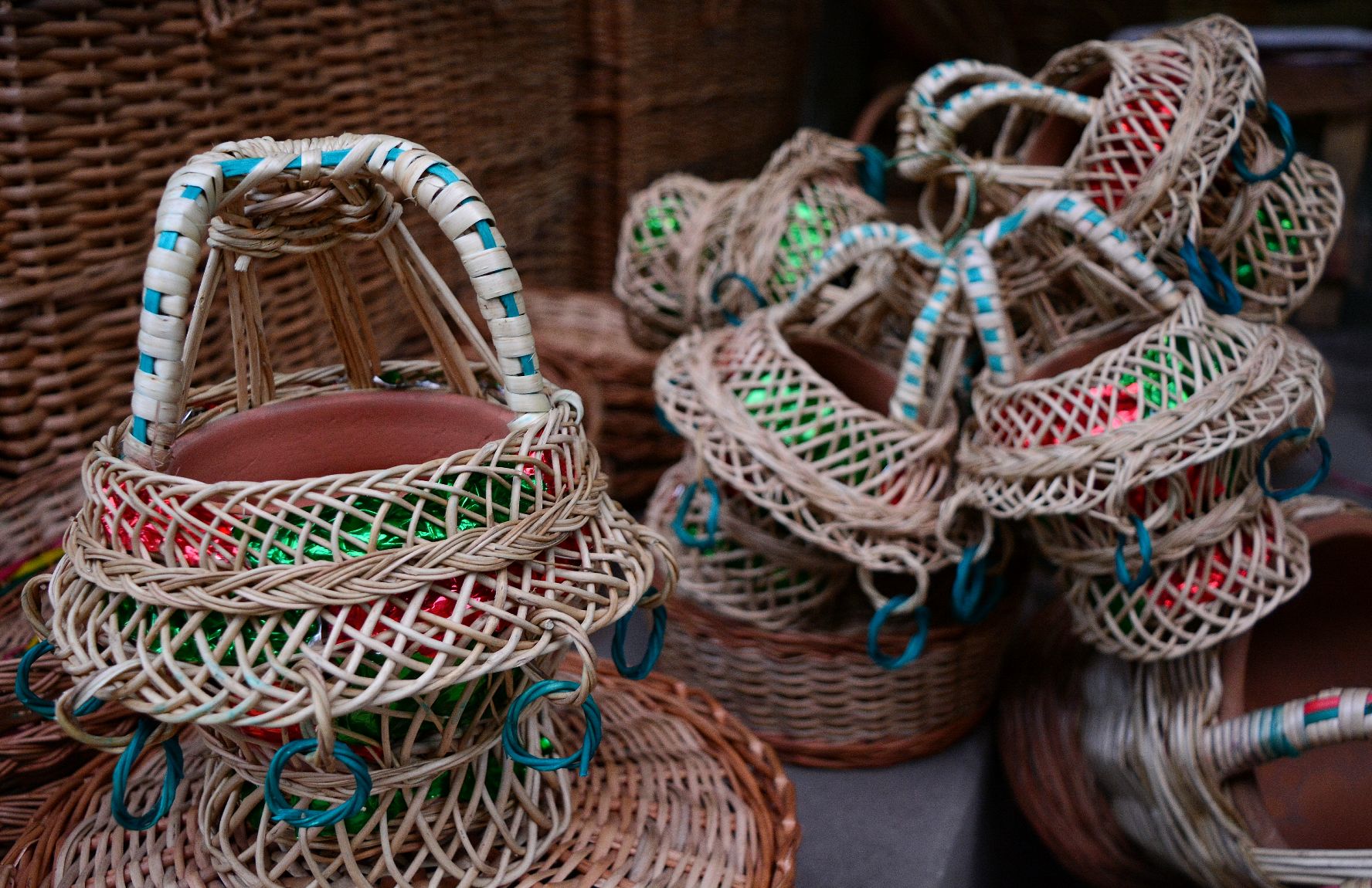 A kangri also known as Kanged or Kashmiri Kanger is an earthen pot woven around wickers filled with hot embers used in Kashmir. It is used beneath the traditional clothing usually called Kashmiri pharan to keep the chill away. A kangir is made upe of two parts. The outer part is an encasement of wicker. Inside, there is earthen bowl-shaped pot called a kundol.
The usage and making of kangri is distributed in all parts of the Kashmir valley. Most of the areas which make kangri are very poor and not well educated. The people are living in mud houses in this modern age as well. They lack the necessary facilities of water, road, and electricity.
With the on-set of winter the demand of kangri goes increasing in the markets of Kashmir. Particularly when snow starts falling in the valley of Kashmir. With the time all items and things are being replaced by new thing and highly compatible things in the market. The kangri had not loosen its market. Still the kangri is in enormous demand in Kashmir. No matter how people have adopted new technological equipments such as blowers, room heaters, electric power balnkets to keep themselves warm. Since there is lack of adequate supply of electricity in Kashmir valley. These modern equipments run on electricity to keep them running these need electricity. So they lack they have failed to decrease the market of kangri.
Okey (wakai) is a small village in Kulgam district, which is located about 72km from Srinagar. The main occupation of villagers is Kangri making. On reaching the village you will see that people are busy in making the kondols. The kondols can been seen on the road which passes through the village okey . this road connects kulgam district with Shopian district. “ I had started the art of Kangri making at 15 and now I am 55 years old, but I consider the art of kangri making as interesting and passionate as it was before,” said Mohammad Jamal Shaikhsaz, a local Kangrimaker.


There are number of kangri which are being made by kangri makers. The more time kangri takes for its completion and more precious and more costly will be the Kangri. Mohammad Jamal Shaikhsaz works along with his four sons who are also involved in this art of kangri making. Mohammad Jamal said that he generally makes five types of kangris. These are namely (Band Wajin Kanger ) price from 50 to 60 rupees, ( Satardar Kangir ) price goes from 80 to 90 Kangir, ( Farash-dar Kangir ) price goes from 130 to 150. There are also some more types of kangris which are made by kangri makers like (wud Kangir, Maharaz Kangir, Randar Kangir) but theses type of kangris are made on demand because they take lot of time for thei completion and are also more cotly their price goes up to 1500.

With the change of technologies in every field of life the kangri making had also changed a lot. First of all the Kondals were being made on potter’s wheel, which had to run with the hands and it was difficult to make kondals also this method of making kondals were too time consuming and with ths ony a person could make 100 kondals a day. kumar A makes kundals with hand wheel 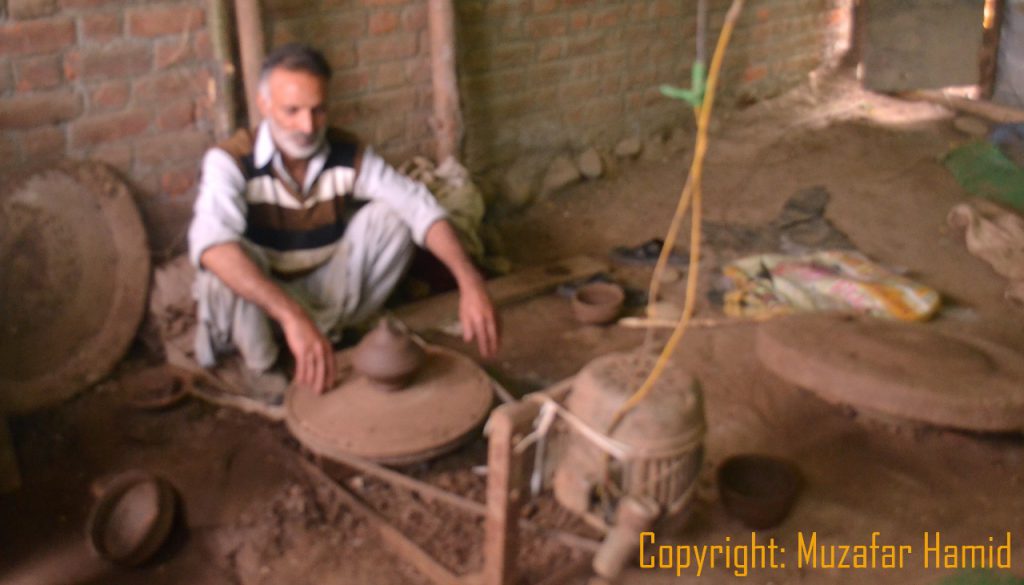 A kumar makes kangris with the help of electric wheel

But with the onset of technology and moving towards a better technology the new wheel came in the field of Kangri making. A new method with advanced technology of kondal making is now used by kumars (Persons which make Kondals). The new potter’s wheel which runs onelectricity. This is more compatible than the old one. A kumar can make 250 to 300 kundols in a day. This is sufficient for his survival and better for his family. The average price of one kundal is about 7 to 8 rupees. Which can increase or decrease depending upon the market need.
The making of fresh Kangri making starts from march and remains till the end of winter season February. The solding of kangris starts from October and remains till ending February. The consumption of kangris decrease or increases according to the behavior of winter season.

On one hand people associated with the art are making every effort to keep this art living. “we are landless people and we have no livelihood without this occupation of kangri making. We are unable to give children better education .because we suffer on regular basis every year middle men takes whole profit from us . they provide raw material on advance basis and gave away whole profit of the kangris, said Rafiq Ahmad, son of Mohammad Jamal. Government has taken several steps for the up lift ment of people which are associated with different occupation in the valley. But on this time no scheme has been made for people who are associated with the art of kangri making. Children of kangri makers are not interested with this art, because it seems that this art is no more acceptable in today society. They are moving towards different occupations for their livelihood.