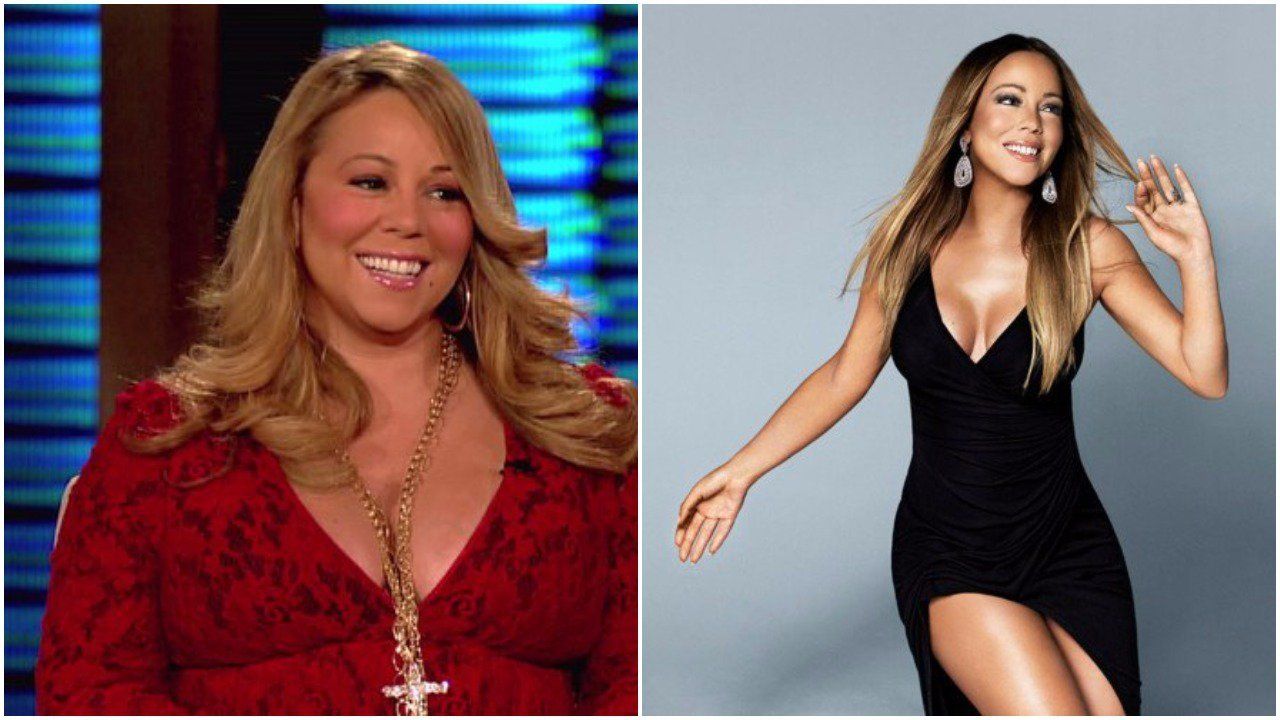 After a 30 year career of giving it all, giving birth to twins, body shaming and the stress of the music industry, it’s safe to say that Mariah Carey’s weight loss has been fluctuating.

After the birth of her twins in 2011, Carey (then 41 years old) ended up losing 70 pounds on the Jenny Craig diet plan.

She lost the weight with a strict diet and exercise plan, but added, “I never weighed myself. People will think I’m a liar but it’s true . . . I’m a big-boned girl, I’m tall, and so I always weigh more.” Instead of stepping on the scale, she said, “I would tend to go, ‘Does this size dress fit me that I wore three years ago?’ . . . I would go by what it looked like, how I felt.”

Mariah struggled with self acceptance a lot while she was pregnant.

“When I was pregnant, I had a house with lots of antique mirrors on the walls, so as I walked around, I couldn’t help but look at myself—this huge pregnant woman,” she recalls. “I hated myself for decorating the house with all these mirrors. I was so mad at myself.”

In fact, figuring out the proper lighting and decor in her home is essential to helping her feel her best.

According to a 2015 report, Carey might have started toying with the idea of a gastric sleeve for weight loss after hearing her ex-fiancé, James Packer boast about it. “The singer’s size had been steadily increasing over the years – and it was her (then) billionaire boyfriend who put the idea in her since he himself lost more than 75 pounds from the procedure in 2011,” an  inside source revealed.

In 2016, Carey dished to ET’s favorite daytime diva, Sharon Osbourne about her personal weight struggle. She was talking about getting ready to marry the millionaire businessman, James Packer.

“The funny thing with me is I would always be like, ‘Oh! I gained weight,’ because I am muscular, so sometimes I don’t even notice it,” Carey explained. “Now I have been pretty consistent with this “bleak diet” that I am on.”

She went on to mention this “bleak diet” again in another interview with ET about the dietary regime she has to follow while getting ready to perform for her Caesars Palace residency. Leading up to the big day, she’s probably months deep in diets and more.

She said: “I tried to bring the moments, the costumes, but it’s hard. I guess that’s why I am on my bleak diet. “

What is the “bleak diet” that Mariah Carey follows?

Basically, it’s as bleak as it sounds because she may have been trolling interviewers with this term.

“Yes. My diet is very bleak,” she told the Sunday Times, giggling. “I overuse the word because there is a lot of bleakness going on. My bleak diet is horrendous, but I don’t want to tell anyone about it because it’s none of their business.”

“I just don’t want people commenting,” she adds hinting that she doesn’t want anyone to ask about her diet and exercise regimen at all”.

Carry knows this stems from struggling to find confidence. “I am a pretty insecure person,” she explains, “But I have to get over that because this is the reality of my life. I look better than I looked a few months ago, but I am definitely not one of those people who says, ‘I look amazing today.'”

Maybe this is why her weight had increased since and Mariah Carey’s biggest weight loss headline would come in 2017, from her gastric sleeve weight loss surgery. There’s no time for insecurity when you’re in a permanent contract with the size of your stomach.

Aah, the year of body shaming! But haters would soon learn about how the power of determination, perseverance and having money can go a long way!

In 2017, online trolls really got to Mariah Carey’s skin when they commented unkind remarks about the singer during her Caesars Palace residency.  One source revealed that Mariah Carey wanted weight loss through exercise and dieting again, but then she started “getting a lot more criticism online from body shamers. The hateful comments shaming her size and pushed Mariah towards the procedure in September or October 2017.

Some of the comments read:

“Mariah you need to lose some weight, you are starting to look like a whale”

The body shaming wasn’t the first time Mariah felt insecure about her weight though. In 2011, she was feeling insecure about being the huge pregnant lady. Then, an insider opened up about her insecurities of weight gain to a point where: “She has the tags cut out of clothes, so she can be blissfully unaware of her size”.

All of this changed when she walked into her Hand and Footprint Ceremony at Hollywood.

In September 2017, ET confirmed that Mariah Carey lost weight by undergoing a gastric sleeve weight-loss surgery performed by a top surgeon in Beverly Hills, California.  At age 47, Mariah felt like this was a new beginning for her.

She had shed at least 30 pounds from going through weight loss surgery by November 2017!

Mariah Carey’s weight loss came from a gastric sleeve and a new diet regime which includes: Salmon, Capers, Chicken Broth and an occasional glass of wine. Since gastric sleeve weight loss surgery is a procedure that shrinks the size of the stomach, patients eat less and so this type of diet could be the new diet Mariah had to follow. The procedure can be done via a small incision, meaning recovery time is fast and scarring is minimal.

This was the year where she became very confident about her appearance. Yes, like any diet, it was hard in the beginning but Mariah Carey was able to keep up with it, leading to a healthy mindset and body.

After 30 years of singing for us, Carey seems to be in the best shape of her life. Her career has had many ups and downs but in 2019, she snapped this photo on Instagram and posted it in January 2019. With a fabulous body, she also flaunts the effects of a consistent diet and exercise routine dressed in a two-piece swimsuit with minimal makeup.

When it comes to diets, Mariah Carey has been very open about trying to lose weight and her insecurities with the same. Fortunately, a source close to Carey told HollywoodLife.com that the (then 48 year old) entertainer follows a completely sugar-free diet and consumes plenty of lean protein.

“Mariah loves smoked salmon and capers, so she eats a lot of that lean Instagram photos left us wondering exactly how she’s managed to slim down, and attain one of the most enviable figures in the industry.

After looking at those bikini photos taken in January 2019, many have been wondering how they too can look that good at the age of 48.

The answer may lie in following a strict diet full of protein and the special secret: Cut out sugar completely, and that is processed sugar.

“She has cut out chocolate and other sweets, and when she has cravings, she eats little pieces of fruit, like some blueberries or mangos, an insider said.  She is working out regularly and eating clean, whole foods with a focus on vegetables. She has also cut out carbs and bread. “As a result, she has lost a ton of weight and is looking and feeling great!”

Carey also mentioned to Us Weekly that after delivering twins, she enlisted a full-time dietitian who helps her stick to 1,500 calories a day, especially in times where she needs to quickly shed excess weight.

When eating 1500 calories she would have opted for snacking on multiple smaller meals throughout the day instead of eating 3 big meals to keep her energy levels up while also avoiding bloating and tiredness.

Page six revealed that “Mariah has always been proud of her curves, but this summer, as her Caesars Palace residency came to a close, and then she went on tour with Lionel Richie, she noticed it became harder to dance, and she was getting a lot more criticism online from body shamers.”

It is hard to dance if unlike Jennifer Loper or Beyonce, you are well known for being a singer first and foremost. With vocal ranges of a goddess, why does her weight even matter?! She fluctuates and that’s been something we all have dealt with at some point in time.

According to Us Weekly, Carey works out three times a week to stay at the perfect weight, and looks radiant without makeup. But some feel that her radiance could have plenty to do with her on/off relationship with back-up dancer Bryan Tanaka, the singer-songwriter has disclosed exactly how she maintains her physique in recent interviews—considering life as a mother to twins Moroccan and Monroe can admittedly get hectic.

Aside from being a mom to twins, Mariah Carey gets her heart pumping from workouts that are aerobic. These have been known to release pressure from your bones as well as relaxing your muscles. While aerobics are often unfairly associated with the elderly, Everyday Health reports that it makes your blood more capable of delivering oxygen around your body, as well as reducing chances of cardiovascular disease.

As with any entertainer, being on the road or preparing for your body to perform in front of millions is challenging. If Instagram is real even in the slightest of chances, Mariah seems to be doing fine with her weight.

Daniel Radcliffe: Net Worth in 2022 and Career of the Harry Potter Star

Can You Play Sports With A Torn ACL?

Puffy Nipples: Info On The Condition That Can Be Changed!

Who Said Desserts Can’t Be Healthy? Check Out These Recipes!