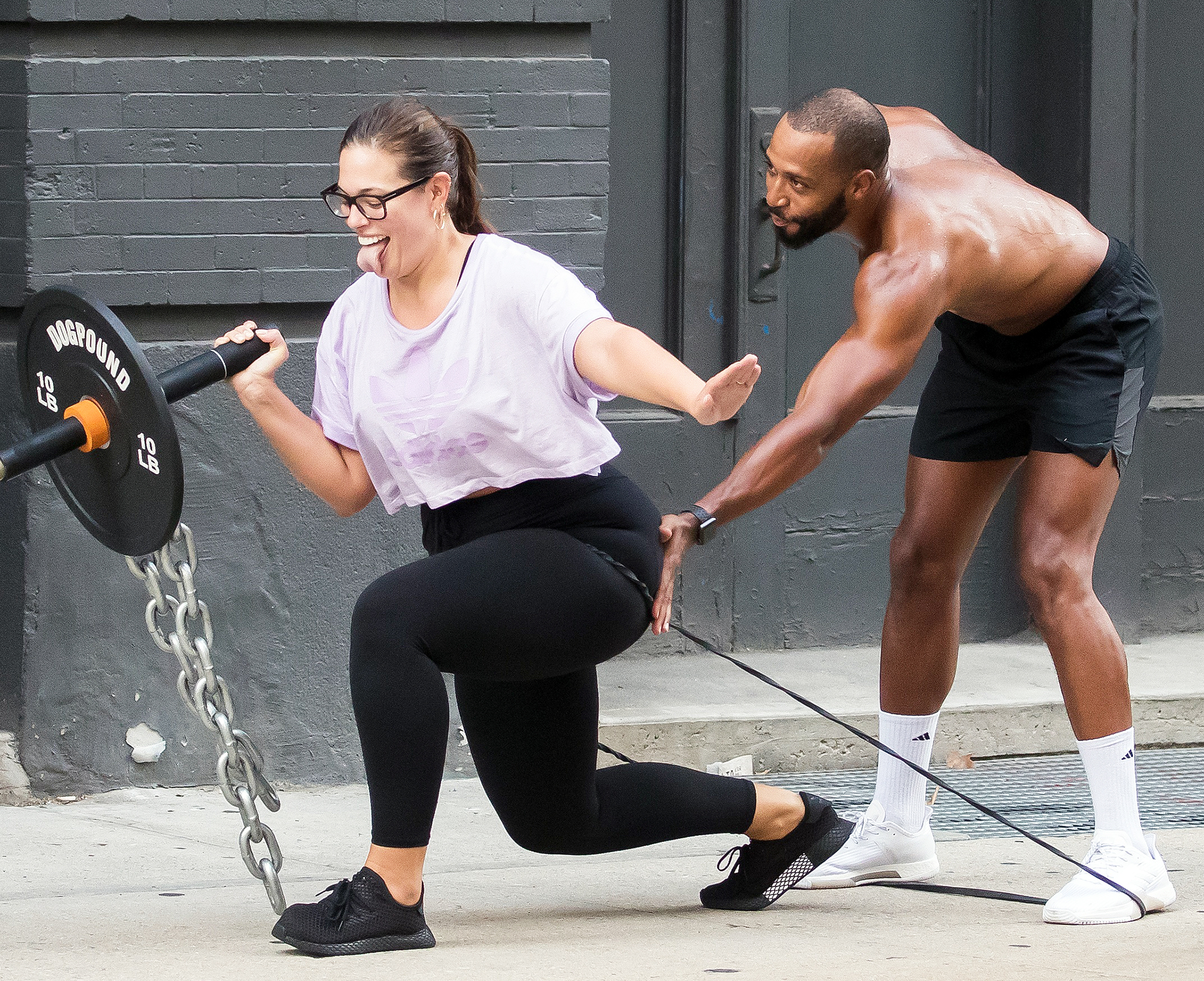 Ashley Graham has been criticized for her weight loss in the past. After posting some exercise videos on her Instagram page, Graham came face to face with comments claiming that she exercises to lose weight to no longer be a plus-size model. However, Graham didn’t hesitate to set the record straight, saying she exercises to feel good and get energized (which we tip our hats off to).

“To be completely honest, I’ve gained weight in the last five years, not lost weight. Look at my IMG Polaroids from when I first signed with them to now, you can tell I’m thicker. I mean, it’s just age!” stated Graham to set the records straight about her “weight loss”.

According to Hollywood Life, the Vogue cover girl is ‘sick of people constantly commenting on her weight, and her body—she gets it, she’s a model, but it’s the incessant, never ending speculation over how much she weighs, or if she’s lost any weight, if she’s gained anything, that really, really bugs her.’

That being said she is encouraging healthy habits in her own way. Graham feels about green juice the way most people do about apples: once a day keeps the doctor away. Her favorite combo is a blend of kale or even adds spinach with lemon, ginger, beets, apple, and parsley.

Ashley Graham’s weight loss diet is a low carb diet which is full of real food and nothing processed.

For the best food and nutrition, Ashley started to eat more fruits on an empty stomach. This is perhaps because she may have suffered from acid reflux and an upset stomach over the years. Shifting and being a little bit more careful about what she ate, how she ate and when is why the plus size model got her results.

For those who want the Ashley Graham weight loss experience, Graham has certainly provided us with workout resources, of which Instagram is the largest. She believes that it’s best to workout without thinking about weight loss and instead to focusing on the feel good aspects of increased circulation, higher energy and something as small as being a step closer to being healthy.

Throughout the days of the week, she posts a picture or video of her training. Her work ethic is clearly seen during these videos because you can see her giving her best at the gym. Incredibly she continued to work out during her pregnancy as well which is a perfect inspiration for some of us to at least move around for 10 minutes if not for a full on 20 to 30 minutes. But be careful with Ashleys workout style as you may need to see a doctor before starting.

Here’s the workout break down that she posted on Instagram:

Plank rotation knee to opposite elbow

On her Youtube channel, she features THANK BOD, Workout with Ashley Graham. Workouts for cardio, upper body, legs and more are featured including a cool down. Ashley Graham worked with a Certified trainer Kira Stokes who developed these workouts.

In her new workout series which are only a couple of months old she talks about having discussions such as looking in the mirror and saying thank you to your body. She says we often forget how powerful our bodies are.

“I remind myself by hitting the gym! Working out doesn’t have to be punishment, it can be an act of gratitude. So come be my workout buddy and get ready to THANK BOD! “

Her Youtube channel also features having open discussions with people who stand out. She features people who are fearless and anyone who wants to go through a transition can check out her channel if not only for weight loss.

Ashley Graham fell in love with her pregnancy body and changed up her workout after becoming pregnant. She surely makes her health a priority. Ashley Graham also challenged her body with yoga. “My lower back is killing me, that’s why [I] am doing this position( called King Pigeon)!, “It releases so much tension! Yoga is the best thing for me right now.”  Rest assured, Graham warmed up her body “significantly” before reaching this pose, says her coach Latham Thomas.

“I’ve had the blessing to work with Latham Thomas as my doula,” says Graham. “Her prenatal yoga classes have helped me reclaim my calmness and prepare for childbirth. I practiced yoga sporadically prior to pregnancy, but I now practice regularly. I’m still training with Kira Stokes—[I’m] jumping less, but still focused on weights and mobility exercises.”

The King Pigeon or the Pigeon pose helps create a fluid spine that’s less likely to feel aches and pains, says Thomas. “The lower back can get really impacted by normal movement in daily life in addition to accommodating a growing pregnancy,” Graham said after noting that this pose can help alleviate that impact.

Thomas recommends only attempting the pose if you have prior yoga experience and no previous injuries.

“For non-pregnant people, it’s a normal pose. For pregnant women, it is a peak pose that challenges strength and flexibility,” explains Thomas. “Benefits include hip-opening, lateral stretch, quad stretch, chest-opening, elongation of arms, expansion of rib cage—which feels amazing when you’re pregnant. Prenatal yoga helps to elongate your muscles, stretch and strengthen connective tissue, lubricate/protect your joints, and induce a relaxation response in the body.”

“For me, going to the gym isn’t about losing weight. It’s about gaining, not only confidence, but there’s a mental stability that I get through it,” Graham said. “I get this euphoria. Your body, your brain is releasing endorphins when you work out. You just feel better when you leave the gym. You hate going. You love when you leave.”

“Being a mommy-to-be, I wanted to show other women that we can still show our bodies self-love and gratitude during pregnancy, while also building our mental strength and determination,”……”So, in this series, we’re meeting our abs, loving our booties, coming to peace with cardio, and reaching our body goals.”

“Your body is a vessel, and I’m a firm believer in exercising our minds, bodies, and souls,” told Graham. “We all have different health goals, and working out is all about strengthening yourself in healthy ways that you see fit. We are all worthy of feeling good.”

When it comes to body positivity Ashley Graham tends to radiate positivity, sharing regularly empowering posts on social media channels. In reality her journey toward self-love has had both ups and downs.

“Throughout my pregnancy, I’ve had to surrender to the process of my body changing, mentally and physically,” she says. “I can honestly admit that it’s not easy embracing my pregnant body, and all of its changes, every day.”

Even though some days are hard for the plus size model, she credits the support she’s received online for both her overall positive outlook, as well as her motivation to connect with people via her YouTube fitness series.

“I’ve always treated my social media accounts like a community,” she says. “We listen, uplift, and empower each other. And I know that if I’m experiencing a feeling or emotion, someone else is likely having a very similar experience. The support from our community reminds me of my strength and superpowers in being a woman. It helps me to take my own advice and practice my own affirmations.”

Who is Ashley Graham?

Ashley Graham is a popular plus-sized American model (with 9.1m followers) in the industry, gracing the covers of major fashion magazines and walking in high fashion runways. Born on October 30, 1987 (hello fellow Scorpions) Ashley Graham is an American model who has become one of the most popular faces in the modeling industry and particularly for women who identify themselves as curvy (a term Graham prefers instead of the term “plus-sized”).

Preaching about body confidence, Graham has been described as an ambassador of the “real beauty” movement, which celebrates what real women’s bodies look like rather than the impossible standards set by the fashion industry. With her social media following and revolutionizing high fashion, she has graced the covers of the world’s biggest fashion magazines, including Vogue, Elle, and Harper’s Bazaarand has walked the runway for major fashion brands and designers.

What size is Ashley Graham?

Who is Ashley Graham married to?

She met her husband, Justin Ervin, a videographer, at church in 2009 and they got married the following year. Ashely Graham and her husband Justin Ervin have both announced in August 2019 that Graham is pregnant with her first child and their first as a couple.

“Surprise!” Graham and Ervin stated in an Instagram video on Graham’s page. In the caption, Graham celebrated the couple’s ninth wedding anniversary while revealing their big next step as the camera panned away to reveal her growing belly.

“Nine years ago today, I married the love of my life. It has been the best journey with my favorite person in the world! Today, we are feeling so blessed, grateful and excited to celebrate with our GROWING FAMILY! Happy anniversary, @mrjustinervin Life is about to get even better.”

Ervin also shared his own personal update on Instagram along with a gallery with throwback photos of the couple and a sonogram picture.

“To my forever love and my daily inspiration. Happy anniversary @ashleygraham,” he wrote. “These 9 years have played out like a lifetime. I guess it’s because my life really started once you came into it. Now that we’ve made a life together, let’s make a life together. I love you and I love us. All of us…”, he stated.

How old is the model Ashley Graham?

How was Ashley Graham discovered?

Graham was discovered at a tender age of 12 at a mall in Omaha, Nebraska by an International Modelling Agency, I & I, Ashley Graham was the chosen one. Right after she appeared in ads and got her start by learning the ropes of being a serious model.

When she turned 18, she moved to New York City to pursue her career full time. With her extravagant personality and a great attitude, her journey to stardom began at such a young age and she was among the very young models to pursue modeling as a career so early in her life. Graham first signed on through Wilhelmina Models back in 2001. But two years later, she moved to Ford Models and worked till the agency closed down its plus-sized division. Currently, she is represented by IMG.
Ashley Graham has appeared on the covers of Vogue, Harper’s Bazaar, Elle, Glamour and has walked the New York Fashion Week runways, most notably for Michael Kors’ spring/summer 2018 collection.

Fans and followers of Ashley Graham have always loved her for giving us fitness inspiration for years. Just by scrolling through her Instagram and you’ll see the supermodel using crazy gym equipment, doing aerial yoga and HIIT. She also inspired so many of us to start thinking about exercise in a different way. It’s an attitude of joy rather than punishment.

Think about it, unless you learn to look at exercising and eating well, as an act of kindness for your “not-so-perfect-body”, you will always look at it as a punishment to change for the better. That may be why Ashley Graham’s weight loss has been successful both physically and mentally.