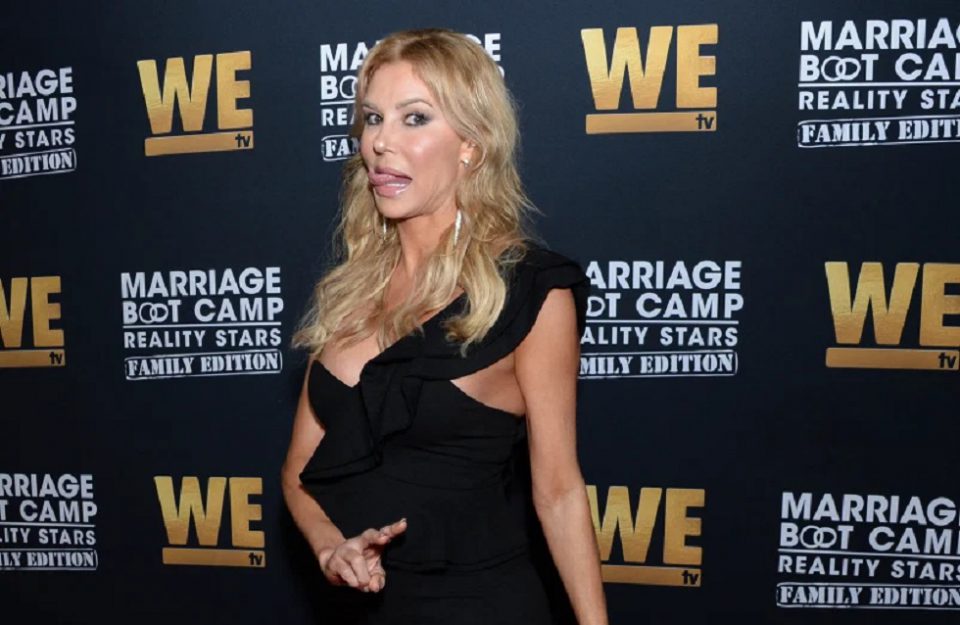 You know Brandi Glanville (or Brandi) on television as the tall blonde goddess who was introduced during a birthday party which turned into a made-for-reality-tv bitch fight about how and when to parent boys according to Kyle Richards 101. On The Real Housewives of Beverly Hills, Brandi was quick to establish herself as the “slut” of the group but by the end of the season, the limping bombshell won everyone over with her unique sense of unfiltered humour (slapping Vanderpump’s face and all). And, over the years she’s become a wine enthusiast, cussing freely and we’ve all grown accustomed to the magnificent tornado of personalities that is Brandi Glanville. But have you ever wondered what Brandi’s life was like before RHOBH?

A lot of the women who get cast on the show mention their antecedents and background either in detail like Taylor Armstrong or in glimpses like Brandi who mentioned something about having hippie parents and a hippie lifestyle as a comeback for when the girls were making fun of a certain nipple revealing white tank top number that she wore. So, let’s start this list discussing her upbringing:

The Real Life Of Brandi Glanville Before Fame

Celebrity Big Brother viewers were stunned after Brandi Glanville revealed she used to sell WEED in school. Glanville was born in Salinas, California and raised in Sacramento, California as the middle child of Judith (née Swinehart) and Guy Glanville.

The Real Housewives of Beverly Hills star made the surprise confession in the garden during a chat with Sandi Bogle and Helen Lederer, who couldn’t hide the shock from their faces.

When the house had been transformed into Big Brother’s cheerleading camp and the housemates were all wearing cheer outfits, Helen asked Brandi who was born and raised in California, whether she was a cheerleader at high school.

The 44-year-old, who loved her costume, replied: “No I wasn’t, this makes me very happy. I was selling weed.”

And her response resulted in some comically shocked facial expressions – especially from ex-Gogglebox cast member Sandi. An astonished Sandi shouted “weed” before covering her mouth and giving Brandi a long, hard stare. Helen said: “I think she did say that,” then Sandi added: “No you didn’t Brandi.”

Brandi admitted that with her siblings, older sister Tricia, and younger brother Michael, had blackmailed her father in order to obtain money. She explained the reasoning behind her illegal activities by saying:

“My dad grew it so I stole it and sold it. I was friends with all the cheerleaders and everyone so it was perfect.” Sandi cheekily joked: “So you could sell it quick then.”

“I blackmailed my dad once, in a positive way. I said we all want 100 bucks, my brother and sister and me, or we’ll call the police.”

A confused Sandi said: “You hustled your dad.”

Brandi added: “100 bucks was like so much money to us back then.”

Brandy’s father worked three jobs to support the family, such as working at a grocery store and gas station. Her mother worked as a housekeeper. The reality star went to Willow Rancho Baptist School and Gloria Dei Luther and graduated from John F. Kennedy High School.

Brandi, who was born in 1972, moved to France and signed with Elite Model Management. You probably already know this, because she mentioned her modeling career no less than a bajillion times but did you know she was just 16?

According to Bravo TV bio, she’s been working for 17 years as a high fashion runway and print model, with gigs at Chanel, Armani, and Gucci under her belt.

According to Wikipedia, she worked in Hamburg, Munich, Los Angeles, New York and Tokyo initially and the next year, she was taking part in Paris runway shows. She has appeared in several magazines, including Glamour, Cosmopolitan, NW and Beverly Hills Lifestyle Magazine. She appeared on the magazine cover of UK’s The Times in January 2014. Glanville has worked for well-known brands including Valentino, Versace, Chanel, Giorgio Armani, and Gucci. She has appeared in a commercial for Coors Light. Check out this 1992 print ad that Brandi revealed was done sans real pants:

She was already a mom before the show:

In 2011 the mom-of-two joined US series Real Housewives Of Beverly Hills.  Brandi was always very candid and open about her ex-husband on her first season of RHOBH and like most of her castmates already was a mom. However, Brandi’s kids were always hidden from the camera and her divorce was pushed as front news.

Where it all began:

The catwalk-turned-reality star moved back to LA in the 90s after her stint in Europe, and met her future husband (later to be ex-husband) Eddie Cibrian at a nightclub.

Brandi married Cibrian, star of Baywatch Nights and Sunset Beach at the time, on May 12, 2001. The wedding came almost a year and a half after Eddie proposed on New Year’s Eve, 1999 with a 3-plus-carat diamond ring. The ceremony was attended by 200 friends and family and was held at the beachfront Ritz-Carlton just south of Los Angeles in Laguna Niguel, California. Brandi Glanville’s wedding dress was designed by Reem Acra while Eddie Cibrian was sporting an Armani tuxedo.

Brandi stayed in Los Angeles for Eddie before they would eventually move to New York City for five years during his stint on the show Third Watch. At this time Brandi Glanville continued to model with the Elite Agency. Then in June 2003, they welcomed their first son Mason Edward, and another boy Jake in 2007. In ’06, Brandi gave up modelling and began to look after her boys full time.

Where it all went wrong:

Cibrian had multiple affairs while married to Glanville, most notably with SURver Schaena Marie, then with LeAnn Rimes, whom he met on the set of the Lifetime movie Northern Lights in 2009. Later on that year, Rimes and Cibrian went public with their relationship, and by 2010, Glanville’s divorce from Cibrian was finalized. The scars of the Glanville/ Cibrian marriage were barely healed when Cibrian and Rimes married in 2011.

In 2002 Brandi made her ex-husband pay for her vaginal rejuvenation:

It’s no surprise that Brandi pulled this insanely, well thought out plan to get back at her husband after he was caught cheating! “This pretty intense surgery had an even more intense price tag: $12,000,” Brandi wrote in her memoir which would come out years later.

“A brand-new vagina would be an Eddie-free vagina…. I decided that since Eddie had ruined my vagina for me, he could pay for a new one. I gave [the doctor’s office] Eddie’s credit card number.”

Brandi was gaining popularity on Twitter feuding with LeAnn before RHOBH:

Brandi and Eddie ended their marriage after a public affair between Eddie Cibrian and country singer LeAnn Rimes, who was co-starring with him at the time in the Lifetime movie Northern Lights.

Brandi Glanville and LeAnn Rimes would eventually get into a bitter Twitter feud in which both ladies aired out their feelings toward each other for the public (and lots of happy bloggers) to see. LeAnn would seemingly become obsessed with Brandi and on numerous occasions appeared to pose for photos striking similar poses to Brandi, most of which while wearing only a bikini. The accusations of mimicry would continue, including LeAnn Rimes’ wedding to Eddie Cibrian, which took place April 22, 2011 which was the same year that Brandi bagged the Real Housewives show, so we guess the upper hand goes to her!

Finally, the famous “Friend of the Housewives” (who reportedly earned $18,000 as a part-time cast member during her first season on the show) rose through the ranks, became part of the cast, and drunk tweeted her way into secret best-selling author status.

Saving this bombshell secret for last, Brandi Glanville revealed she has had her fair share of lovemaking with both men and women.

‘I don’t swing both ways,’ she added. ‘I’ve been with women, usually there’s a man involved… I have a couple times been with women where it was just us.’

The former runway model who was married to actor Eddie Cibrian for eight years, spoke about her sexual past saying:

‘That’s not something that you plan for,’ Brandi said about her past menage a trois. ‘I feel like it has to be organic.’

5 Most Productive Things To Do While In-Home Quarantine