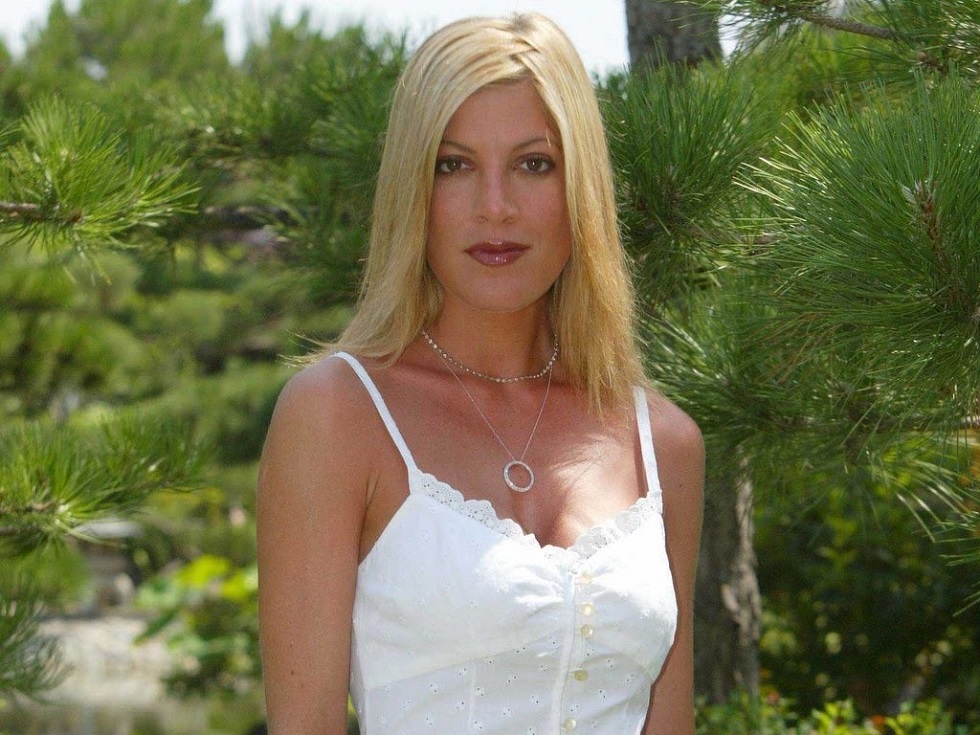 Tori Spelling is a famous actress, television personality, author and socialite and author. Tori Spelling hails from Los Angeles, California. Tori Spelling is most famous for her breakthrough role of Donna Martin on Beverly Hills 90210 during the early 1990s. The show was produced by her father Aaron Spelling. Tori Spelling has appeared in a slew of films that were exclusively made for television. Some of her most famous made for TV movies are A Carol Christmas, Mother, May I Sleep with Danger, A Friend to Die For, The Last Sharknado: It’s About Time, and The Mistle Tones. Tori Spelling has also had a successful career in the field of independent films. Some of the independent films that Tori Spelling has starred in are: Ctulhu, The House of Yes, Scary Movie 2, Trick, The House of Yes, Izzie’s Way Home and Kiss the Bride. When 90210, the spinoff of Beverly Hills 90210 was launched in 2009, Tori Spelling reprised her role of Donna Martin in it. Tori Spelling has also released a very successful biography titled Stori Telling. The autobiography debuted on top of the New York Times Best Seller list and went on to be adjudged the best celebrity autobiography of 2009. A long and successful career in different entertainment fields has resulted in Tori Spelling having a net worth of $500,000 as of 2020.

When was Tori Spelling born?

Victoria Davey Tori was born on May 16th, 1973. She was born in Los Angeles, California. Her mother’s name is Cindy Spelling (born in 1945) and her father Aaron Spelling was a famous TV and film producer. He produced famous movies such as Charlie’s Angels, Dynasty and Fantasy Island. Aaron Spelling passed away in 2006. He was 83 years old at the time of his death. Tori Spelling’s parents are of a Jewish origin and their ancestors migrated to the USA from Russia and Poland.

Where did Tori Spelling study?

Tori Spelling went to Beverly Hills High School in Beverly Hills, California. She transferred to Harvard-Westlake School and graduated from there in 1991. Tori Spelling started taking acting classes from the age of six. As a result of her father’s influence, she even made guest appearances on famous television shows such as Hotel, Fantasy Island, Saved by the Bell The Love Boat, Vega$ and T.J. Hooker.

In 1990, Tori Spelling’s father’s production company, Spelling productions was working on a series, Beverly Hills 902010. A 17 year old Tori Spelling was cast to play the role of Donna Martin on the show. Tori Spelling played the role of Donna Martin for as long as the show ran. She even earned two Young Artists Award nominations in the process.The success of ‘Beverly Hills’ opened the doors for new opportunities and soon she was cast in several made-for-television films.

After the completion of ‘Beverly Hills’, she debuted on stage with the play ‘Maybe Baby, It’s You’ in 2002. Her next big venture was in the VH1 sitcom ‘So NoTORIous’ in 2006, where she appeared as herself.

Tori Spelling also served as the hostess for the animated television series ‘My Little Pony: Friendship Is Magic’. She appeared during  the finale of its second season. It aired on April 21st, 2012.

‘Yo Gabba Gabba!’, an American children’s television show, had her as their special guest on the eve of Christmas on December 18, 2012, where she was seen baking cookies.

Who is Tori Spelling Married to?

Tori Spelling had married writer and actor Charlie Shanian on July 3rd, 2004. A year later, while on the set of the TV movie Mind Over Murder in Ottawa, Canada, Tori Spelling met actor Dean McDermott. At that point of time, McDermott was married to actress Mary Jo Eustace. Unfortunately, Tori Spelling and Dean McDermott began cheating on their spouses as soon as they met and established sexual relations. Three months after the affair started, Tori Spelling separated from her husband Charlie Shanian in October. Shanian filed for divorce soon after that, citing irreconcilable differences as the reason. The divorce was finalized very quickly on April 20th, 2016.

How many children does Tori Spelling have?

Tori Spelling and Dean McDermott have had a long and successful marriage which has resulted in five children: son Liam born in March 2007, daughter Stella born in June 2008, daughter Hattie born in October 2011, son Finn born in August 2012 and son Beau Dean born in March 2017. Tori Spelling is also the stepmother to Jack Montgomery McDermott (born October 10, 1998), who is McDermott’s son with former wife Mary Jo Eustace. This is what Tori Spelling said about having kids: “After I had my kids, I realized it’s pretty much all about instinct – you have to do what’s right for you. Everyone has an opinion, but it was all about what you do or don’t do. I was so overloaded, so I let my children dictate the way things were supposed to go, and things fell into place.”

Tori Spelling has had a very active writing career. When she released her sixth book, Spelling It Like It Is, she talked about dealing with financial troubles in her life. The troubles were chiefly caused by her reality series being cancelled, bad decisions in the field of real estate, and an extremely difficult fourth pregnancy, where she required hospitalization for 10 weeks. Tori Spelling said “…as my real estate obsession persists, it’s starting to look more compulsive. Moving is expensive, and I’ve put us in a precarious financial situation.”

As a result of all of that, Tori Spelling’s net worth as of 2020 is $500,000. Tori Spelling also serves as an ordained minister within the Universal Life Church Monastery

“It’s always when you think that you’ve lost a little of the baby weight that someone steps in grabs a handful of a now sans baby soft belly and asks the inevitable When are you due?”

“When a marriage fails, the story of the relationship changes. The best parts, the parts that made you think getting married was a good idea, fade from memory.”

“It’s much harder to give up on family. Deep down you want it to work so badly that you keep making the same mistake.”

I love sharing my stories and experiences with people and connecting to them on both a humorous and emotional level.

I’ve had the two procedures that probably every other woman in Hollywood has had done.

“I want to be a positive role-model for my daughter. The last thing I want to put out there is that it’s acceptable to be too thin or have an eating disorder because you’re in Hollywood.”

“Sometimes, when I’m alone, I put on six-inch heels and wear nothing else and dance around in front of the mirror and do my little stripper dance.”

“I look at Liv Tyler and think ‘It’s not fair’, because I can’t find a flaw on her. And on top of that she seems nice, so it’s really not fair.”

“People are always saying that Hollywood messes up kids. I’m like, ‘No, families mess up kids!’ I grew up in Hollywood, and I’m perfectly fine. If my children want to go into the entertainment business, I won’t stop them, as long as they’re passionate about it.”

Tori Spelling is someone who has done so many things and been through a lot in life. There are a lot of lessons we can learn from her. Here are three.

A lot of celebrities try to push this image that they are very similar to a regular, average person. However, that’s far from the truth. Most celebrities need to look good as their image is a big part of their appeal. Because of that, celebrities undergo extreme measures to look their best. They work out very hard, diet very strictly and even have cosmetic surgery procedures. Whenever a celebrity talks about losing weight with ease, we shouldn’t believe it right away.

2. Stop comparing yourself to others

Jennifer Lopez and Shakira can lose all their pregnancy fat in a few months, that doesn’t mean it’s going to be the same for average people. A lot of the time, the pictures on magazine covers are not even authentic. A lot of the photographs are extensively airbrushed and edited to make celebrities look flawless. Tori Spelling has admitted to using all those techniques and that’s proof enough.

3. Don’t be rushed about your Post-Partum Weight Loss

This saying is very true, “It took 9 months to put the weight on, it will take 9 months to get it off.”

Crash dieting is always a bad idea. New mothers need to breastfeed their babies and as a result, need to consume more calories. If the mother doesn’t get enough nutrition, her body won’t be able to produce enough milk for the baby. Never try to drop the baby weight with the help of some extreme diet.

Tori Spelling was born and raised in Hollywood royalty, her father was a famous producer and she started working as an actor at a very young age. She has also gone on to author numerous books. One of her books was adjudged the best autobiography of the year. Tori Spelling also runs a highly successful clothing and jewellery line. She also inherited a good amount of money from her father’s estate after his death. Tori Spelling’s net worth as of 2020 is $500,000.

Online Casinos Are Here To Stay: Here’s How You Can Enjoy Them Responsibly