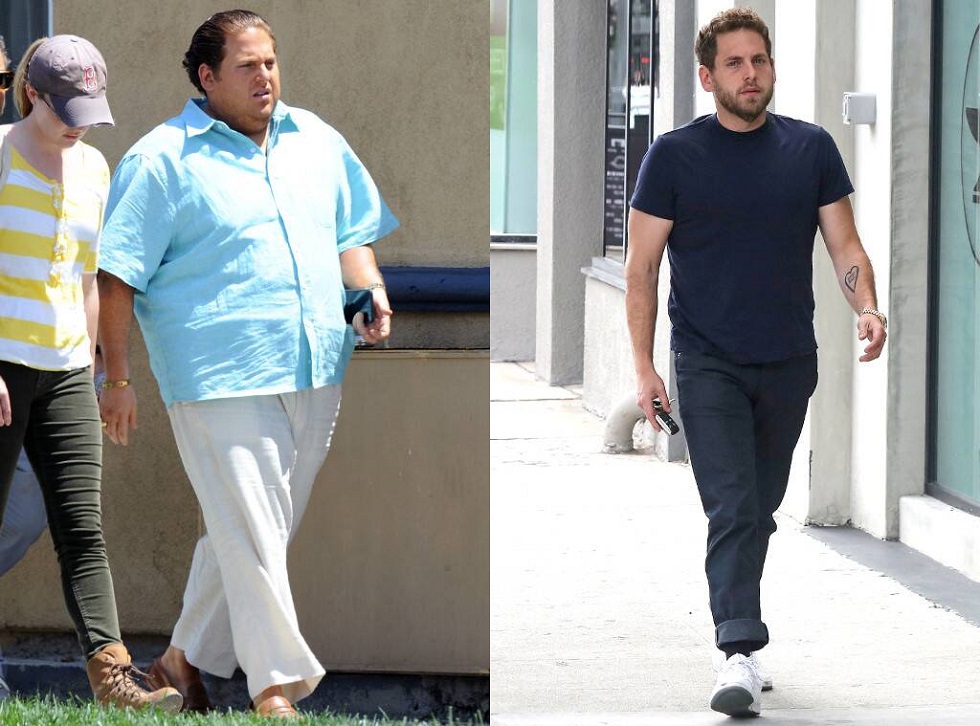 As much weight as Jonah Hill lost, he keeps losing even more pounds and almost looks unrecognizable in 2020. Maybe this is why no one does transformations better than celebrities! So to showcase Jonah Hill’s continuing dramatic weight loss we begin with his latest post in October 2020 on Instagram.

Taken at what looks to be an Indian or Mexican restaurant, Hill posted his unrecognizable photo on his Instagram. Known to have changed to a vegetarian diet, here he is sporting a blond beard looking nothing like his old self!

In his casual photo in October 2020, he joked about his facial hair while urging fans to vote in the upcoming presidential election. “I always feel very vulnerable when I shave my beard. Please vote,” he captioned the Instagram post, adding a close-up of a giant tortoise’s face (to emphasize the feeling of being clean shaven) . “I thought it was Seth Rogen,” one fan commented, while another wrote, “Who’dis?”

Hill’s sister, Beanie Feldstein, shared a family photo in September 2020. “Endlessly proud of this bar mitzvah boy (also hugging my three favorite guys after 7 months of not being able to was heaven),” she captioned the Instagram. Hill showed off his slim figure in a brown suit.

Interestingly, his journey first began back in 2011 but resumed again in 2017 after he worked hard to lose the 40 pounds he gained for his 2015 role in War Dogs. To do so, he enlisted the help of a nutritionist and trainer and even got advice from some trim and toned friends such as Magic Mike XXL star Channing Tatum.

Jonah Hill was seen last year where the paparazzi got a peek at his chest while changing out of a wetsuit after a surf lesson in Malibu, California.

Just a month before he went surfing, the Jewish actor was also seen leaving a Brazilian jiu-jitsu training session.

Martial arts is working wonders for Jonah Hill. In 2019, the actor shared a photo of himself on Instagram after earning his first stripe in Brazilian jiu jitsu. “I started Brazilian Jiu Jitzu 2 months ago and try and train 4 or 5 times a week,” he wrote in the caption. “In high school the dudes who did Jiu Jitzu used to beat the sh–t out of us at parties so it turned me off to it as an idea growing up. But quietly I always thought it was a beautiful art form . At 35 , I try and get over the stuff that made me feel weak and insecure as a teenager.”

Losing weight is far more difficult for some people. This process may look physical but has a deep emotional aspect that only a few people can connect to. In this scenario, the people who have put on excess weight tend to suffer as they consider themselves misfit. It is not entirely their fault because the people around the victims make them feel vulnerable. And, what if the victim is in the limelight? Can you imagine the pressure of being criticized publicly? Can you imagine being constantly clicked and being laughed upon? If you cannot relate to it, Jonah Hill is the celebrity you need to read about. This actor may not have always looked attractive on screen, but surely has a story to tell the audience. And, of all stories, the one that is most inspiring is Jonah Hill’s weight loss journey. What is the story like? Read on to get to know the actor’s amazing journey.

What is the Secret behind Jonah Hill’s Weight Loss?

As a young teenager, Jonah Hill had suffered from being overweight. No matter where he went, people would call him fat and ugly. He tried his best to fit in with the jocks and the hip-hop guys but his weight did not allow him to mingle with the regular kids. He was like an outcast waiting to show the world he was handsome in his own way. Thus, this pressure that started in his school days continued with him when he started his career in films. He would get photographed by the press and the next day an article would come up on how fat or unattractive he looks. This was tormenting and this is the pressure he could not handle easily.

In order to ensure that people stopped criticizing him because of his weight, Jonah Hill tried to lose weight several times. He was successful every time but managed to put weight back on. Thus, several tries at looking constantly fit and attractive made Hill frustrated. He admits even today that his weakness for pizza and beer amounts to immense weight gain. He is surprised at how fast he loses weight when he quits drinking beer and how fast he gains weight when he resumes drinking the same. Thus, coming to a standstill was becoming extremely difficult.

Jonah Hill visited a nutritionist for consultation. His diet was changed completely and he resorted to being a responsible adult by quitting bad eating habits. He started turning away at the sight of cheesy meaty pizzas and switched to healthier food like salads and grills. His favourite food turned out to be the healthier sushi made with either salmon or tuna. He also started having sushi without mayo and replaced the same with fresh veggies. Eating balanced and healthy food again is not the end of the problem because, in order to enhance the process of melting extra fat in the body, exercising is equally important.

Jonah Hill joined a gym and hired a training instructor. He went to work out and was spotted exercising with a combination of running, weightlifting, and boxing. The actor admitted that it was difficult to start working out in the initial days. However, he gathered up enough enthusiasm and started running. Running regularly gave him the encouragement needed to work out further. He started doing ten push-ups daily which gradually increased to a hundred push-ups a day. This helped him to lose weight faster and become an inspiration to all.

Jonah Hill Feldstein was born on 20 December 1983 in Los Angeles. He grew up amidst creativity because his mother was a fashion stylist and costume designer while his father toured with Guns N’ Roses as an accountant. This creative environment instilled the passion for writing in this young boy and he dreamed of becoming a successful writer one day. His early days of struggle as a fat kid began in Brentwood School and he later changed to Crossroads at Santa Monica. Despite the emotional turmoil he went through, Jonah Hill continued to work hard to finally enter into the New York School to study drama and pursue writing. During his college days when he was not busy gorging on pizza or drinking beer, Jonah Hill was seen busy writing plays and practicing different characters. He received appreciation from his fellow students and professors which motivated him to try out for roles and make a career in the movies.

Jonah Hill was a promising actor and it did not take long for him to make a mark in the industry. During his college days when he was busy writing his heart out, his stage play attracted the attention of the industry and he was cast in “I Heart Huckabees”. Jonah Hill did not even imagine that he would begin with his first film in 2004 itself and this was a blessing that he did not let go. He grabbed this opportunity and performed to the best of his ability. It was soon after this movie that he started getting offers for televisions and movies for minor roles. He used such opportunities to excel and gain experience so that he could grab bigger roles in the long run.

Jonah Hill’s prayers did not go unanswered. He soon made it to the poster of the movie, “Superbad” in 2011 and wooed the audience with his stunning performance. Though he was criticized for being fat and unattractive, his acting skills were praised by both critics and fans. This man seized this opportunity as the turning point in his life and began getting major roles. His performance in 2011 in the movie, “Moneyball”, was exceptionally good and he got an Oscar nomination. His talent continued to spark the red carpet as he received yet another Oscar nomination for the movie, “The Wolf of Wall Street”, in 2013. He did not win the award but he again wooed the spectators in 2016 with his performance in the movie, “War Dogs”. His character was brilliantly played out and that won him a nomination at the Golden Globe Awards.

As appreciation and criticism began coming in the way of Jonah Hill, he started performing better as an actor and strived to look slimmer day by day. He tried his immense best to lose weight and inspire the world that used to call him fat once.  His struggle did not go in vain because he did manage to lose sufficient weight to look much better than before. And, it was during Jonah Hill’s weight loss regime that he decided to write down his emotions in the form of a script and direct an upcoming movie. “Mid90s” was born out of the heart and mind of the famous international celebrity that speaks more of the difficult emotional turmoil he had to go through as a teenager. Today, Jonah Hill has lost over 40 pounds and become confident to propose marriage to his girlfriend, Gianna Santos. He has achieved what he did not think was possible and he wishes to instill this sense of determination in the youngsters today. Hence, Jonah Hill is not just a comedian that people love to watch but an inspiration that will go down in the history of the world of cinema.

How to Write a Halfway House Business Plan

The Best Outdoor Workouts to Do in NYC During the Winter

Priyanka Chopra and Nick Jonas first picture from there Roka