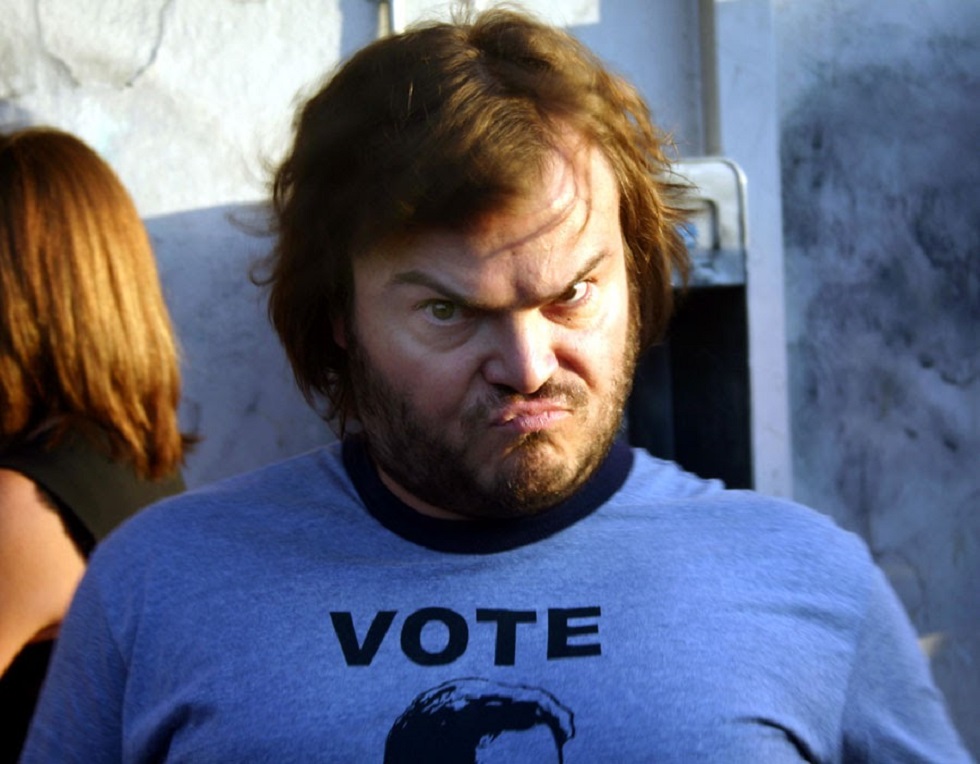 Thomas Jacob “Jack” Black (born August 28, 1969) is a very famous and beloved American actor, comedian, singer, musician, songwriter, and YouTuber. Jack Black has mainly worked in comedic roles in Hollywood and he has left audiences in fits with his roles in movies like He is known for his roles in films such as High Fidelity, Shallow Hal, School of Rock, King Kong, Tenacious D in the Pick of Destiny, The Holiday, the Kung Fu Panda franchise, Tropic Thunder, Gulliver’s Travels, Bernie, Goosebumps, Jumanji: Welcome to the Jungle  and its sequel, Jumanji: The Next Level. Jack Black also received Golden Globe nominations for his roles in Bernie and School of Rock. Jack Black was inducted into the Hollywood Walk of Fame and given his own star in the year 2018. Jack Black is a man of many extraordinary talents, aside from being an excellent actor, Jack Black is also the lead singer of the Grammy Award winning comedy rock duo, Tenacious D. Jack Black formed the group in 1994 with Kyle Gass. The duo has released three albums, The Pick of Destiny, Rize of the Fenix and Post-Apocalypto. The duo also starred in a full length feature film entitled tenacious D: The Pick of Destiny. Jack Black also provided the voice to the protagonist of the heavy metal video game, Brutal Legend. Jack Black is a massive fan of gaming and even launched his YouTube channel called Jablinski Games in 2018. As a result of a long and illustrious career in the fields of movies and music, Jack Black’s net worth as of 2020 is $30 million.

When was Jack Black born?

Jack Black was born on August 28th, 1969 in the town of Santa Monica, California. However, Jack Black spent the majority of his childhood in Hermosa Beach, California. Jack Black’s mother’s name is Judith Love Cohen and his father’s name is Thomas William Black. Jack Black’s parents were satellite engineers who worked on the legendary Hubble Space Telescope. Jack Black also has three half siblings from his mother’s side. His half siblings’ names are Rachel Siegel, Howard Siegel and Neil Siegel. Howard siegel died of AIDS at the age of 31. Jack Black’s mother is Jewish by birth while his father converted to Judaism later. Jack Black was raised in a Jewish household. He attended a Hebrew school and had a bar mitzvah

Jack Black’s parents separated while he was very young. They eventually divorced by the time Jack Black turned 10 years old. Jack Black’s father gave up Judaism after the divorce. Jack Black moved with his father to Culver City after the divorce but visited his mother very frequently. Jack Black’s association and fascination with video games began from a very young age. In 1982, Jack Black appeared in a commercial for the Activision game Pitfall! Jack Black was a member of the Boy Scouts as a kid. Jack Black also had a serious cocaine addiction problem during his teenage years. Speaking about his cocaine addiction at the age of 14, Jack Black said: “I was having a lot of troubles with cocaine … I was hanging out with some pretty rough characters. I was scared to go to school because one of them wanted to kill me. I wanted to get out of there.”

Where did Jack Black study?

Jack Black was enrolled in the Poseidon School by his parents. The private secondary school was specifically meant for students who were struggling with the traditional schooling system. Jack Black also went on to attend the Crossroads School and excelled in drama over there. After graduating high school, Jack Black enrolled at the University of California – Los Angeles (UCLA). However, Jack Black dropped out during his sophomore year at UCLA and decided to pursue a career in the field of entertainment. One of his college buddies from UCLA, Tim Robbins cast Jack Black in the movie Bob Roberts. During the years 1995 and 1996, Jack Black also got recurring roles in Mr. Show, a sketch comedy series on HBO.

During his freshman (and only) year at UCLA, Jack Black met Tim Robbins who introduced him to ‘The Actor’s Gang’. It was Tim Robbins who encouraged and helped Jack Black make his acting debut in the year 1992. After dropping out from UCLA in his sophomore year and starting an acting career in Los Angeles, Jack Black appeared on numerous television shows such as Northern Exposure, The Innocent, The X Files, Life Goes On and Picket Fences.

Jack Black soon got some small movie roles and appeared in movies like ‘Demolition’, ‘Airborne’, ‘The Fan’, ‘Waterworld’, ‘The Cable Guy’, ‘Dead Man Walking’ and ‘Mars Attacks!’. However, even his small roles, Jack Black’s talent shined through and the movie industry took notice. Jack Black went on to bag leading roles for movies like Shallow Hal, Nacho Libre, School of Rock, Year One, Tenacious D: The Pick of Destiny and Gulliver’s Travels.

In 2009 he starred in ‘Yo Gabba Gabba!’ where he also sang songs. Black appeared in the dark comedy ‘Bernie’ where he played the role of ‘Bernie Tiede’. Black’s role was well received by critics.

Jack Black also played a starring role in the Dan Harmon show ‘Computerman’, ‘Laserfart’ and ‘Timebelt’. He also appeared in ‘Awesometown’ as George Washington who took credit for other presidents’ accomplishments.

In 2012, alongside other celebrities, Black recorded a song for the Library of Congress named ‘Book People Unite’. For the fourth album of the famous TV metal band Dethklok, ‘the Doomstar Requiem”, Jack Black contributed the song The Doomstar Requiem.

What is the name of Jack Black’s band?

Jack Black is one of the most popular, successful and revered figures in the world of entertainment. He has appeared in hit movies such as School of Rock, Tropic Thunder and Jumanji: Welcome to The Jungle. He also has a successful music career with his band Tenacious D and he has performed in front of millions of people. As of 2021, Jack Black’s net worth is around $30 million.

Who is Jack Black’s wife?

Jack Black was engaged to jazz bassist Charlie Haden’s wife Tanya Haden in January 2006. The couple went to Crossroads School together and met after 15 years at a perty. Parks were re ignited and the couple got married on March 14th, 2006 in Big Sur, California.

How many children does Jack Black have?

What religion does Jack Black practice?

Jack Black is an atheist but he also identifies as a nominal jew. As a result of that, he raised his sons in the Jewish faith.

Jack Black is a well known and outspoken critic of the Trump Government. While Donald Trump’s Presidency was being inaugurated, Jack Black and Tenacious D bandmate Kyle gass performed the song “The Government Totally Sucks”. Before starting the performance, Jack Black told the audience: “We haven’t played [this song] for years, because it just never felt appropriate—but now, we’re happy to unleash the beast. The government totally sucks.”

“I played, like, a year of piano until I learned the ‘Pink Panther’ theme. That was my goal. Once I was good enough, I quit. Now my music has to have some rock.”

“The movie Spinal Tap rocked my world. It’s for rock what The Sound of Music was for hills. They really nailed how dumb rock can be.”

“When I was a kid, I thought I was the strongest man in the world. Then, the fastest runner and then the smartest person in the world. One by one my delusions got shut down. Now I just see myself as the lamest guy in the world.”

“I’ve had so many hot, cheesy, corny loves of music in my life. I had a very intense Billy Joel period. So once you’ve really Joeled it up – there’s some good periods of Joel; it’s not all hot cheese. But I can’t judge anyone else for their cheese. I’ve deep-sea dived in the Gouda.”

“Back in the ’70s, like one of my favorite movies ever was ‘The Bad News Bears’, and that was a kids’ movie, but I don’t think of it that way. I think of it as just a great movie because Walter Matthau was so funny and so harsh with those kids.”

“We’re in the dark ages if J-Lo can have a music career because of her ass. And let’s face it, that’s it.”

“There’s nothing you can really do to prepare to rock. Do you prepare to eat a delicious meal? Are you hungry? Then you’re gonna eat it.”

“I don’t have any real spirituality in my life – I’m kind of an atheist – but when music can take me to the highest heights, it’s almost like a spiritual feeling. It fills that void for me.”

Jack Black is a highly successful actor who has become famous for his comedic roles in movies like Nacho Libre, School of Rock, Kung Fu Panda, Tropic Thunder and Jumanji. He has also performed in front of millions of people with his band Tenacious D. Jack Black’s net worth as of 2020 is $30 million.