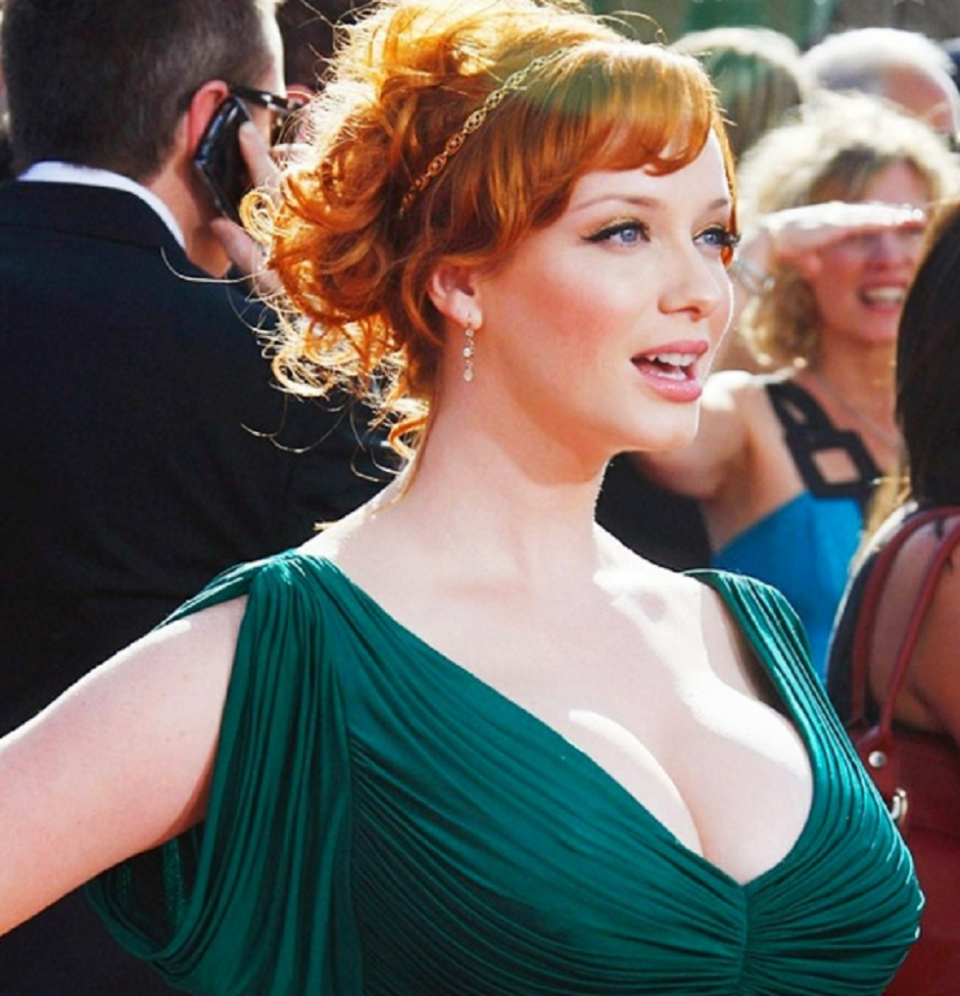 Unusual for a female celebrity, Christina Hendricks is loved in equal measure by men and women. Christina Hendricks is one of the most recognised, acclaimed and lusted-after women in the world because of her extraordinary looks that take us back to a bygone age of glamour with her curves, with her auburn hair (dyed red because of a childhood memory) and with her flawless skin. Playing the sassy 60s secretary in the hit series Mad Men, she won critical plaudits, Emmy nominations and a legion of borderline-obsessive fans. The Knoxville native and actress caught the attention of millions but did you know these interesting things about her?

1. Christina Hendricks is a natural blonde:

Hendricks is without question one of the world’s most recognisable redheads, so it’s a surprise that it’s not actually her natural hair colour. The natural blonde but has been dying her hair red since the age of 10, inspired by one of her favourite novels as a child, Anne Of Green Gables.

Of her choice, she said: “I’m naturally a dark blonde. I couldn’t tell you what shade because I haven’t seen it in ages. I started playing with red hair when I was ten years old. I recognise how odd it is now, but my mum let me do it. I was obsessed with Anne of Green Gables. There was something about her that spoke to me and I wanted to have her beautiful red hair. My mum said, ‘Well, let’s throw a rinse on it.’…My hair was very blonde at the time, but it went carrot red. And I was over the moon. I went to school the next day and felt like myself.” She’s a knockout whatever colour her hair is, but some wonder if her career would have been so successful without that iconic red fringe.

2. Christina Hendricks used to be a hand model:

Before acting, Hendricks had a career as a model, more specifically, a hand model.  In 2019, she revealed her hand was featured on the film ad for “American Beauty.”

“Fun fact … wait for it … I used to be a model and sometimes a hand model … this is my hand and another model’s stomach … proud to be a part of this film in ANY WAY!!!,” she wrote on Instagram.

3. Christina Hendricks looks prompted an increase in plastic surgery among British women in 2010:

It’s clear that women love Hendricks’ appearance as it created an increase in plastic surgery among British women in 2010, according to a 2011 story from The Telegraph. A source from the organization said Hendricks played a role in women getting breast implants. A source said in The Telegraph story:  “Christina Hendricks is gorgeous, and the hourglass figure is definitely back in fashion.”

The study noted that the number of breast augmentation surgeries grew more than 10% from 2009 to 2010 in Britain.

Christina Hendricks hated her high school. When she was 13, her parents moved from the small town of Twin Falls, Idaho, to Fairfax in Virginia because of her father’s job with the United States Forest Service. Then she had to start at a new school: Fairfax High.

She stood out from the beginning. In Twin Falls she had been part of a children’s theatre group. She wore Birkenstocks and “hippy dresses”. She was surprised when she saw the other girls her age in Fairfax “carrying purses. I was like, ‘Ooh, purses!’ To me, only moms had purses. They were much more sophisticated and they were having sex and wearing makeup all these things that had not happened for me.”

From the get go, Hendricks was bullied. “We had a locker bay, and every time I went down there to get books out of my locker people would sit on top and spit at me. So I had to have my locker moved because I couldn’t go in there… I felt scared in high school. It was like Lord of the Flies. There was always some kid getting pummelled and people cheering.”

Hendricks found refuge in the drama department and acting provided an outlet for a feeling of impotent rage. She turned full on goth, dying her hair black and purple, shaving it off at the back and wearing leather jackets paired with knee-high Doc Marten boots.

“My parents would say, ‘You’re just alienating everyone. You’ll never make any friends looking like that.’ And I would say, ‘I don’t want those people to be my friends. I’m never going to be friends with the people who beat up a kid while everyone is cheering them on. I hate them.’

5. Her agency dropped her for Taking the Mad Men Role:

It sounds absolutely insane in retrospect, but a job-hunting Christina Hendricks was actually dropped from her talent agency for taking the Joan role on Mad Men. Reportedly, her agency told her, “It’s a period piece, it’s never going to go anywhere”. But when the script for Mad Men came across her desk and immediately she felt it was special.

“I love the idea I have a desk,” she giggles now. “It makes me sound very professional.”

Although she and her manager wanted her to take the part of Joan, her agency didn’t agree.

“They said, ‘It’s a period piece, it’s never going to go anywhere. We need you to make money and this isn’t going to make money.’ They ended up dropping me.”

An unshaken Hendricks then thought:

“I had been on several shows that were meant to be the big ones, that would go on forever, and they didn’t. So there was no sure bet and I’d already taken a chance on them and I felt, why not do the one you’re in love with and take a chance on that?”

It was a gamble that paid off fabulously well. The first season of Mad Men aired in 2007 and was an instant success. Hendricks remembers taking her mother and her best friend to the screening of the pilot episode and being unsure whether audiences would get it. “I turned to them and said, ‘Is it good?’ And they both said, ‘Oh yeah, it’s good.’ I said, ‘Is it boring?’ and my mother said, ‘No, but I didn’t like that he [Don Draper] was cheating on his wife at the end.'”

Hendricks giggled and thought, ‘Oh no, she’s going to hate the show.'”

6. She hated her Mad Men hairstyles:

Didn’t Hendricks love the iconic hairstyle of her Mad Men character Joan, given how she’s had to stick with it for the show’s 7-year run? Nop! Hendricks isn’t a fan of Joan’s permanently worn-up do, stating: “One thing I tried for years and was told no every time was I wanted her to have her hair down. And my boss said, ‘Women find a style they like and they stick to it’, and I went, ‘That’s the craziest thing, my girlfriends and I are changing our colours and cuts all the time'”.

The issue was that preparing Joan’s hair for the show takes approximately three hours, and the make-up department was militant about ensuring the style was consistent throughout episodes. Hendricks said, “There was very little wiggle room – they watched my hair like a hawk. I heard there was a threat at one point that if I kept asking to put my hair down, they were just going to chop it off.”

7. Her biggest acting regret is:

Hendricks wasn’t too proud of her work on MTV’s Undressed, a popular anthology series which ran from 1999-2002, in which Hendricks appeared for four episodes as “Rhiannon”. MTV’s Undressed followed the sexual escapades of young people living in Los Angeles, and though hardly an acclaimed series, it did give a ton of young actors their big breaks in the industry, including not just Hendricks but also Jay Hernandez, Chad Michael Murray, Katee Sackhoff and Brandon Routh. It’s not the best work to ever come out of MTV but it helped young and upcoming actors that needed to find their first gig to get themselves on the map. In that respect, Undressed totally served its purpose, so why regret it?

8. She played Dungeons & Dragons as a kid:

Even though she went through a goth phase as a child, it’s still tough to picture the image of Hendricks, by her own admission, something of a nerdy youngster, frequently playing Dungeons and Dragons with her older brother Aaron. “We would get up and act everything out”, she said, making it clear that she broke with the outdated stereotype that girls couldn’t possibly want to play D&D.

9. Christina Hendricks was once an international model:

Despite being bullied throughout high school, Christina Hendricks grew up to become one of her generation’s most celebrated actresses, praised for both her talent and her beauty. As the actress revealed to Marc Maron on his WTF podcast, her mega-successful career spawned from a Seventeen magazine modeling contest for which her mother convinced her to pursue.

While she didn’t win the contest, Hendricks did take up an interest in modeling, working mostly for a “husband and wife team” in Virginia and modeling for bridal magazines.

“I loved [modeling] because I was traveling for the first time, [and] I was going out of the country,” Christina Hendricks told Maron, revealing that her first overseas modeling adventure took her all the way to Japan.

The Fabulous Life of The Ace Family

A special screening of 'Karwaan' for Irrfan in London