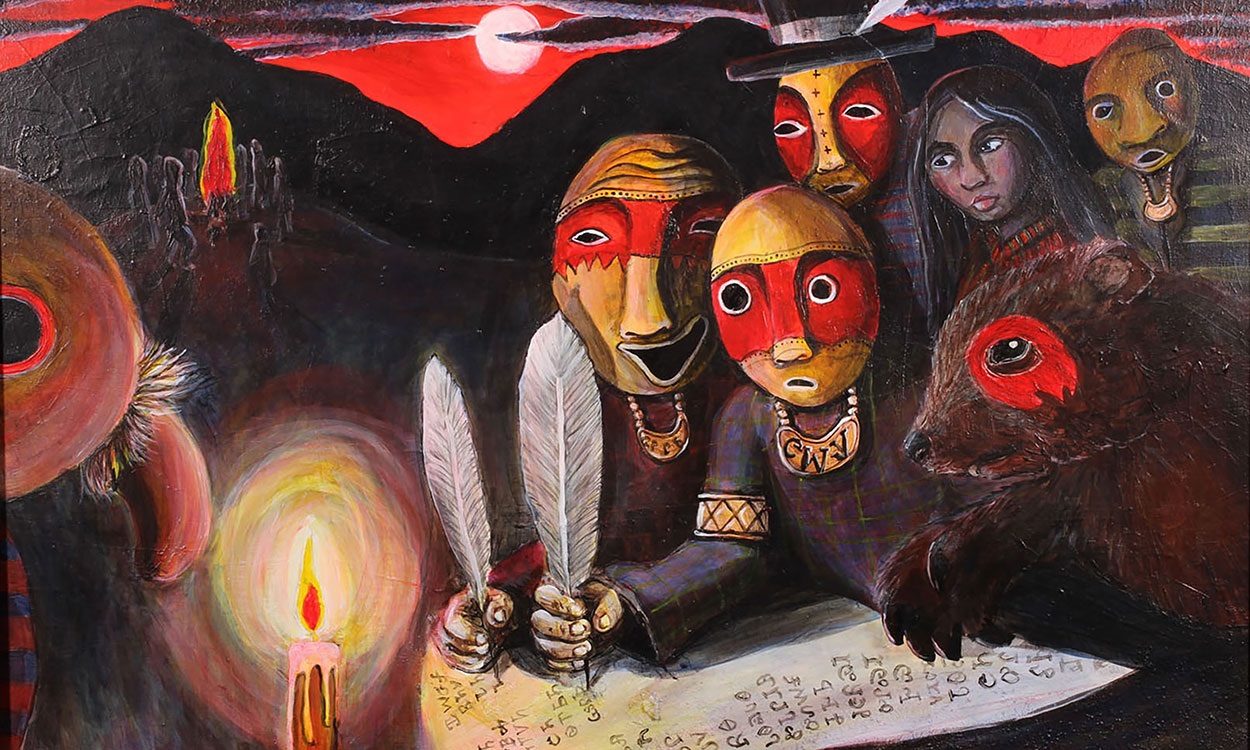 The Cherokee Nation is well known for its beautiful and meaningful art and culture. Cherokee art and symbols used in the design of Cherokee bead, basket, and leather work exude deep meaning for the Cherokee culture and many others who experience these fine works of Native American history. For centuries, Cherokee artists have turned natural materials like river cane, clay, wood, and stone into stunning works of art.  Basketry, pottery, stone carving, wood carving, bead work, finger weaving, and traditional masks are a few of the timeless forms of Cherokee art that endure today.

Authentic Cherokee art comes from traditions that have been passed down from generation to generation in each piece. The culture, history, and sacred traditions of the Cherokee all come alive in the art that can be found in Cherokee, North Carolina.

Who are the Cherokee?

The Cherokee are one of the indigenous people of the Southeastern Woodlands in the United States. Before the 18th century, the Cherokee were concentrated in what is now southwestern North Carolina, southeastern Tennessee, and the tips of western South Carolina and northeastern Georgia.

The Cherokee Indians, like their distant cousins the Iroquois, had an even division of power between men and women. Cherokee men were in charge of hunting, war, and diplomacy while women were in charge of farming, property, and family. The chiefs were men, and landowners were women. Even if Cherokee men and women had separate roles, they also participated in the same activities. Both genders took part in storytelling, artwork and music, and traditional medicine.

In terms of attire and clothing, the Cherokee women always wore their hair long, cutting it only in mourning for a family member. Men decorated their faces and bodies with tribal tattoo art and also painted themselves bright colors in times of war. Interestingly, Cherokee women didn’t paint themselves or wear tattoos, but they often wore bead necklaces and copper armbands.

Cherokee Art: History, Symbols, and Designs of the Tribe

Have you ever watched someone paint a picture or create a sculpture out of a block of stone? Maybe you’ve watched a home show that instructed you on how to build a table or re-tile a bathroom floor. All of these endeavors are made possible through materials and tools you can find in art stores, hardware stores, and by watching a video or reading a book. But, imagine that you had never been given tools, supplies, or even instruction and you had to fabricate your art or craft out of only the things you could find in nature! This is where the Cherokee tribes had to start.

Cherokee tribal art has been around since long before the arrival of European settlers and recorded history. The Cherokee people originally used shell, stone, bone, and small, dried pieces of corn or other plants for their designs in beadwork. They made intricate and ornate purses, clothes, hats, shoes, and various other accessories by combining leather, plant fibers, and animal fibers. With the introduction of small, glass beads, as well as other materials after the influx of European settlers and their wares, the Cherokee artisans fashioned even more beautiful designs.

Symbols and meaning played a large part in Cherokee art. Numbers, symbols, pictures, and even the Cherokee syllabary (the Cherokee alphabet) were used in traditional artwork to represent many different things. For example, the numbers four and seven were often used to represent directions, usually in the form of a cross or a cross within a wheel for the four principal directions: north, south, east, and west. Seven included the secondary directions of up, down, and center. Animals such as the owl and cougar were often used as well, as they represented the pinnacle of purity in Cherokee tribal culture. Different woods were also used in design and artwork. Holly, laurel, spruce, pine, and cedar were very important both artistically and ceremonially. But, cedar (juniper) was the more valued and was often used in funerals to show the highest honor for their dead. Every part of nature was a symbol to the Cherokee people and played an integral role in their artistry and culture.

Speaking of symbols in Cherokee art, see The Bears in downtown Cherokee. The Bears Project is a public art installation that showcases the talents of local artists. The bear is a symbol of strength that has been important in Cherokee culture since before the days of recorded history. Take a walking tour of downtown Cherokee to discover all of the unique bears that have been painted by local artists. Each bear tells a different story from Cherokee life and culture.

What are Cherokee arts and crafts?

The Traditional Arts and Crafts of the Cherokee included pipe carving, rivercane baskets, and pottery. After moving to Oklahoma, the Cherokees couldn’t get the materials they have used for traditional crafts, so instead they focused on other crafts like textile arts and American Indian beading. See these photographs of beautiful , and a Cherokee artifact display from North Carolina.

Cherokees were not feather-nuts and never wore huge feather head-dresses like the Woodland or Plains people. The Cherokee would only wear a feather in time of war or during a game of ball similar to Lacrosse. In preparation for war, the priest (medicine man) from the Paint Clan (Ani Wodi) would prepare the feathers for the warriors to wear into battle. This consisted of a single Eagle or Hawk feather, dyed blood red and tied to the top. The dying of the feature red blood technique was considered a secret and sacred rite. That single feather would then be tied into the Cherokee warrior’s hair, on the top of his head.