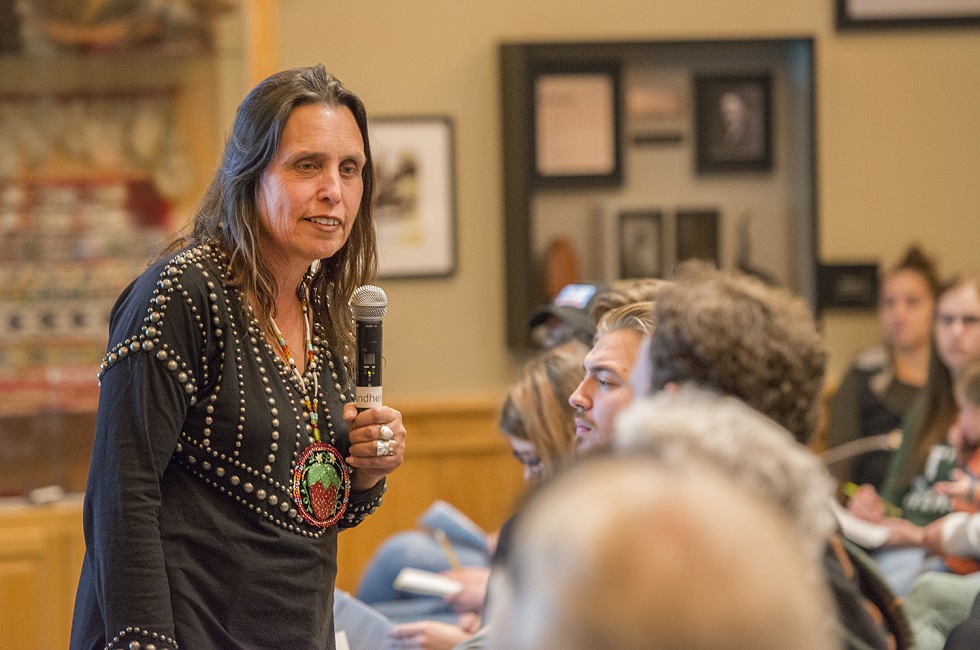 Sacagawea or Sacajawea was born in 1790 in the state of Idaho. When Sacagawea was 10 years old, an enemy tribe captured and took her from the Lemhi Shoshone people to Hidatsa. The Hidatsa village is situated near today’s Stanton, North Dakota. After a few years, she married a French-Canadian trader, Toussaint Charbonneau. Some believe that Sacagawea was forced to marry Toussaint while others say that it was her choice to get married to him.

This Native American woman is known as a significant member of the Clark and Lewis expedition. She was adapted as a symbol of women’s independence and self-worth by the national American Woman Suffrage Association. She has been erected in many statues by the Association along with spreading the story of her contribution to American history. In 1977, Sacagawea was included in the Fort Worth’s National Cowgirl Hall of Fame in Texas. She was also given a title of Honorary Sergeant in 2001 by the former president, Bill Clinton.

Buffalo Calf Road Woman, popularly known as the Brave Woman was born in 1844 and belonged to Northern Cheyenne. She was a woman warrior and became famous after she saved her brother who was injured badly in the battlefield. Her brother was the Chief and was shot during the Battle of Rosebud in 1876. She rode amidst the battlefield bravely and rescued her brother. While doing so, many Cheyenne warriors became motivated and regrouped that made them win the battle. After the battle, she also fought with her husband, Black Coyote in the famous Battle of the Little Bighorn.

She is famous for striking a blow in Cheyenne lore as she had once knocked Lieutenant Colonel George Armstrong Custer before he was dead and fell from the horse. When the battle was over, Brave woman and her husband along with her two children were imprisoned and relocated together with several other Northern Cheyenne tribe and sent to Southern Cheyenne Reservation of Oklahoma.

Pocahontas is yet another popular Native American woman who is known for her attachments with Virginia’s colonial settlements in Jamestown. Although her birth year is unknown, many historians say that she must have been born around 1596. Pocahontas father was a Chief of Powhatan and a paramount chief in Tsenacommacah, an association of thirty Algonquian speaking tribe in Tidewater, Virginia.  However, her mother’s information remains unclear due to her simple status in history. According to the traditions of Powhatan, her mother too died while giving birth to the child.

After being captured and ransomed by Colonists in 1613, she was encouraged to baptize and convert into Christianity under the name of Rebecca. John Rolfe was married to Pocahontas in 1614 at the age of seventeen after which she bore a boy named Thomas Rolfe in 1615. When the Rolfe’s travelled in 1616 to London, Pocahontas was introduced to English culture as an example of most civilized savage so that investments can be stimulated in the settlements of Jamestown. She became a celebrity and attended masques at the Whitehall Palace. The Rolfe’s sailed again in 1617 but she died at Gravesend due to severe circumstances still unknown and buried under the church, St George’ church in England.

Winona LaDuke was born in 1959 and is an environmentalist and economist in America. She is also a writer who writes for the preservation of tribal land and claims sustainable development too. Although Winona spent her childhood in Los Angeles, she was raised mostly in Ashland of Oregon. Because of her family heritage, Winona was enrolled to Ojibwe Nation at a very tender age. She had not lived with any reservations or with White Earth till 1982 when she started working for them after graduation. She became the principal of the school.

Winona father Vincent LaDuke worked as a supporting actor in Hollywood movies while her mother Betty was finishing her studies. When Winona was five, they got separated from each other and her mother became an art instructor in Southern Oregon College at Ashland. Winona’s father reinvented himself and became a new age spiritual leader in 1980s. Notably, Winona earned many awards such as the BIHA Community Service Award in 1997. She was also awarded for Reebok Human Rights Award the following year. Winona had received an honorary doctorate in 2015 from Augsburg College.

Nanyehi, also known as Nancy Ward was born in a Cherokee Wolf tribe in the year 1738. She stood by her husband in the war fought against Creeks in the year 1755, chewing the lead of bullets to provide his husband’s ammunition with sharp edges. When he was shot, Nanyehi grabbed a gun and railed every fellow soldier along with entering the battle herself. The Cherokee won the battle of the day Nanyehi joined the battlefield. The actions of Nanyehi made her popularly known as Ghighau, meaning a beloved woman in English. She held a powerful position in her tribe including duties held by Women’s council and sitting with the Council of Chiefs and treaty talks.

With years, few of the Cherokee showed interest in fighting with the Europeans who gathered in their land. Nanyehi, however, realised that it was difficult to win them and thought that the two cultures i.e. the Native Americans and the Europeans must learn top love together. This made her marry an English man in late 1750s, Bryant Ward. In a treaty conference of 1781, she declared “Our cry is all for peace; let it continue. This peace must last forever.” Looking for peace and harmony did not stop Nanyehi as she recognised the coinciding threats to Cherokee’s territory. In 1817, Nanyehi made a plea which went unsuccessful to stop giving more land. She died in 1822 after spending many years to assist people to learn to change according to the changing world.

Lozen is a famous Native American, a prophet and a warrior of the Chihenne Chiricahua Apache. Chief Victorio is the brother of Lozen who was born in the year 1840. Lozen was born amongst Chihenne band. During an occasion, Victorio has told about her significance in the battle stating, “Lozen is my right hand … strong as a man, braver than most, and cunning in strategy. Lozen is a shield to her people.” The stories and legend behind the name Lozen show that she could use her spiritual powers in the battlefield. She took favours from god to know the exact location of her enemies and how they moved in the battleground.

Lozen took part in various fights with her brother in San Carlos Reservation in Arizona. In the battlefield, she assisted women and children to flee from falling into enemy hands and avoided being captured by them. She was one of the most skilful warriors in the Apache and according to Kaywaykla, “She could ride, shoot, and fight like a man; and I think she had more ability in planning military strategy than Victorio did.” Besides fighting for various battles, she had fought together with Geronimo in the Apache Wars.

Dahteste was another woman warrior who had fought Apache wars. She belonged to Choconen clan. Being married and having children never stopped her from taking part in any raiding parties with her first husband named Ahnandia. In her later life, she joined Geronimo together with Lozen. She was a skilled and brave warrior besides being fluent in English.

Although the native American woman, Dahteste rode and fought like Lozen, she was comparatively more sophisticated and carried herself in a more civilised way. sSince Dahteste was fluent in the English language, she became the Apache people translator and served more like a key messenger. She also became a mediator between Geronimo and the US Cavalry besides playing a significant role in the final surrender of Geronimo in 1886.