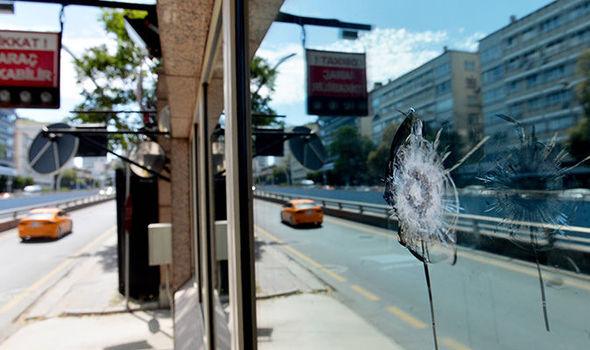 The news popped up in Turkey that an unidentified gunman fired 6 shots at the United States Embassy in Ankara, Turkey. This happened on the morning of Monday as per the local time. According to the reports, no one was injured during the incident. This incident, however, has shaken up both the countries and have initiated a bit of diplomatic fight over a detained US pastor.

As per the news updates, the Ankara governor’s office stated that the gunman who fired at the US embassy was in the moving car while taking the shots around 5:30 AM (local time). Although the bullets just hit the iron gate and window wall, still the chaos and panic have been generated in the diplomacy of both the nations. Not only the gate, a bullet also hit the security guard booth, revealed the media. Luckily, the embassy was closed at that moment and the reason behind the shooting still remains unknown.
In the light of this incident, A US Embassy spokesperson confirmed to the media that this is a “security incident” and asked for the reply from the Turkish National Police. In response to what the US spokesperson stated, the spokesperson for Turkish President Recep Tayyip Erdogan tweeted that this was a clear attempt at creating a chaos among the two countries.

A Clear agenda of escalating tension between the US & Turkey

The shooting at the US embassy was clearly an escalating diplomatic and trade feud between the two countries. The two countries or we can say the two NATO allies are continuously fighting over the fate of Andrew Brunson, a pastor who is being detained in Turkey on suspicion of espionage and alleged tied with the terrorist groups.
Turkey has refused the release of the Pastor back to the United States with the hope of using him as a bargaining chip to get concessions from the US. Not only this but, Turkey has also been planning to use him for the extradition of the Muslim Cleric Fethullah Gulen.
This concerning issue is still being pursued over by the two countries. This diplomatic feud between the two countries seems to be never-ending. Let’s see what comes next.

China Warns Taiwan: Independence Means War. Why Taiwan Claims Independence? Is It That Much Serious That It May Lead to War? Understand Here