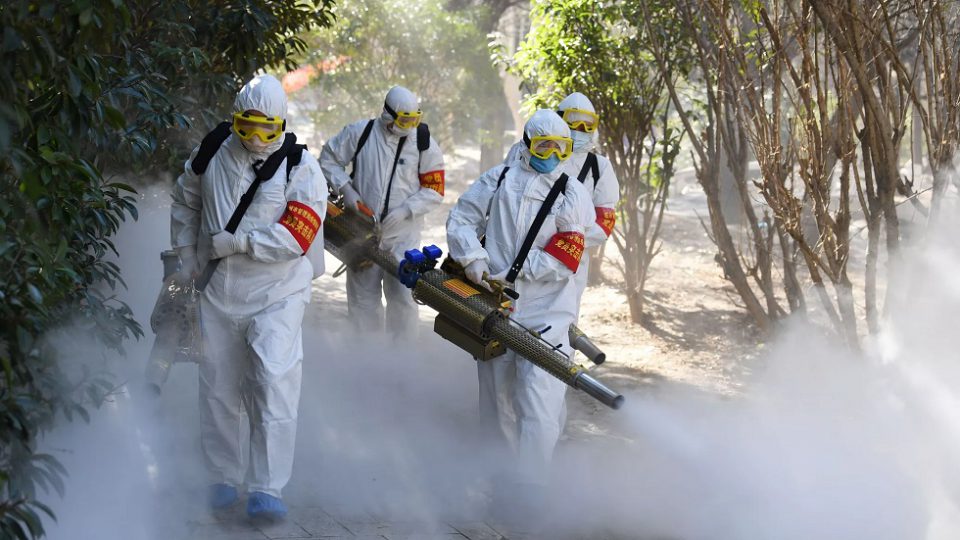 On February 18, 2020, members of a police sanitation team spraying disinfectant as a preventive measure against the spread of the Covid-19 coronavirus in Bozhou, in China’s eastern Anhui province. AFP via Getty Images

As the Coronavirus pandemic spreads like wildfire across the planet, one of the biggest casualties is the sporting world. Many national governments have already imposed bans on sporting events across the board.

In the world of tennis, the ATP has recently announced that it is suspending the men’s tour for a period of at least three weeks.

In golf, the Masters has also been postponed. According to the Augusta National chairman, Fred Ridley, no time limit has been agreed on but there is speculation that it might take place this Autumn. However, golf veteran, Jack Nicholson believes that it won’t be played at all this year.

In the USA, the NBA season has been put on hold indefinitely. This followed hard on the heels of the news that Rudy Gobert and Donovan Mitchell, two players of the Utah Jazz basketball team, tested positive for Coronavirus infection.

Other sports personalities to have recently tested positive for COVID-19 infection include:

Many more sportsmen and women are certain to contract the virus in the coming weeks and months.

The COVID-19 outbreak began in Wuhan, China – the original epicentre – the new epicentre is now mainland Europe as can be seen from the various European countries shown in the above list.

In European football competition, both the Champions League and Europe League games scheduled to be played in the third week in March have been called off. It is also rumoured that Euro 2020, the inter-European Football Championship tournament which is held every four years and was due to play out this summer, could be put back until summer 2021.

In England, Liverpool, the runaway leaders of the football Premier League, are frustrated because the COVID-19 outbreak means a delay to them sealing the Premiership title beyond doubt.

In a recent interview, Danny Murphy, who played for the Reds for seven years, between 1997 and 2004, asserted that no other teams in the Premier League could catch Liverpool. His is undoubtedly right, but the COVID-19 suspension prevents them from making it a mathematical certainty.

Liverpool are 25 points ahead of their closest rivals, Manchester City. Although there is no specific regulation about what will happen if the 2019/2020 is cut short, a senior executive of Liverpool FC revealed that there was no real opposition towards awarding Jurgen Klopp’s team the title. It would be their first in 30 years.

Tori Spelling: A Look At Her Life, Inheritance and Shows