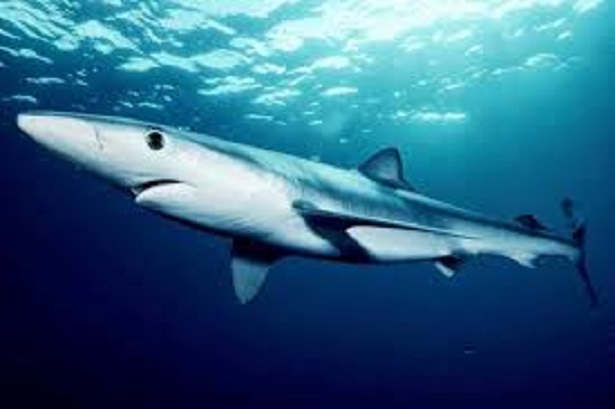 Would these words give you goose bumps and make you see a rerun of scenes from the 1975 movie Jaws in your mind?
The huge white man-eating sharks in the movie that hounded beach-goers were pneumatically powered and obviously fake but if you are a resident of St Ives, Cornwall, England; staying out of the waters might be a good idea!
On Monday morning this week, teenagers Archie Pickin and Harry Hocking spotted a 9ft shark in the waters off the coast at St Ives and managed to capture it on camera. The Shark Trust has confirmed that it was a blue shark (Prionace glauca) and also advised people against going swimming into the harbour.
Sharks are considered open-water species and spotting one so close to shore has raised a flurry of excitement amongst everyone. Speculations are being made as to why the shark is in the confined waters of the harbour, which is not its usual habitat. Injury, illness or disorientation after following a prey are cited as the possible reasons for the shark being in St Ives.
The blue shark is a migratory animal and it is not shocking to see one in the warm waters of Britain. But the Shark Trust insists that the shark, like all other wild animals must be treated with respect and given space.
Just two weeks ago, a Great White Shark was spotted off the coast of Majorca, Spain for the first time in 40 years.
Currently, residents and tourists are wary and staying away from the waters at St Ives till the shark goes back into open waters. Little did the teenagers know that their morning would be so eventful and that their video would be viral!