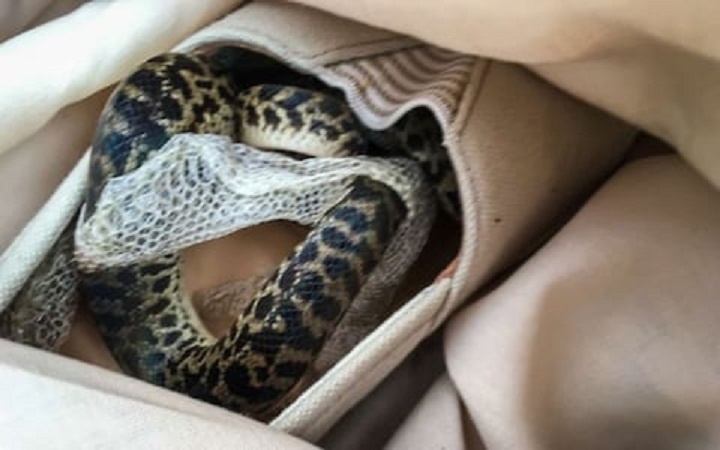 A lady named Moira Boxall accidentally packed and brought a living python in her suitcase while she returned home from Australia.
She discovered the snake hidden in her shoes the day after when she returned to Scotland. Her entire journey was a nightmare itself where she had to catch up three consecutive flights from Queensland till Glasgow.
The snake surprisingly covered entire distance of 11,500 miles and 40 hours’ journey. Snake’s skin was found inside the shoe which it used for hiding. Probably, the python had gone through skin shedding process in the plane itself.
Initially, Mrs Boxall thought that it was a prank thrown by her family members. After seeing the movement in snake, the 72 years old lady went through the biggest shock of her life. She said to the reporters that “I honestly thought it was toy and my family were playing a joke on me. But then it started moving, I saw its head and its fangs were going. I got the biggest shock of my life”.
The Scottish animal welfare charity, SPCA confirmed to NPR via email that the snake has been rescued and is kept at Bridge of Allan’s property, a small town at about 30 miles distant from Glasgow. The officer in charge of rescue team, Taylor Johnstone said in an emailed letter, “When I arrived, the snake had been contained by the caller, so I safely removed the snake from the property.”
Mrs Boxall resides at Bridge of Allan and has been visiting Sarah Airlie, her daughter, Paul, her son-in-law and Emily, her granddaughter at their home in Queensland.
On the sight when she found snake in her luggage, she got frightened enough to get this snake outside as soon as possible. She said, “It was very frightening but I knew I had to get it out of the house as quickly as possible. I ran down the stairs with it to the garden”.
“I put an empty carton of margarine over it and then a bucket and then a cardboard box which I put bricks on top of it.”
Three weeks prior returning, her family in Queensland woke up at around 5 am early morning due to a crashing sound. They saw a 2 feet long snake heading towards the room that knocked a plant kept on bedside table. Although the snake rescuers arrived after making a call, they found no trace of snake in house.
The lady believes that it must have hidden into her shoes and spent next few days hibernating.
Mrs Boxall, further added, “There had been really bad storms when I was in Australia and I was told that the snakes like to try and get inside when the weather is like that”.

Snake on a Plane: Scottish Grandmother accidentally brings home a Snake coiled in a Shoe!

Pagan Sex Rituals: All You Need to Know