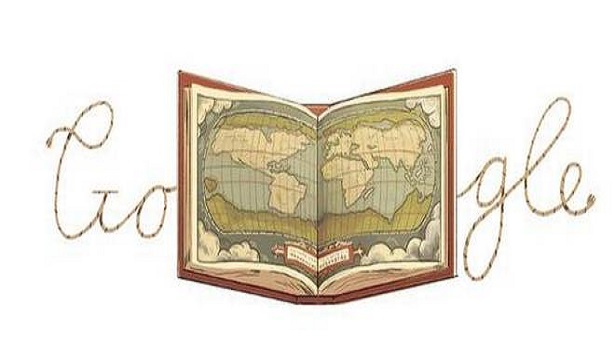 If you visit the Google homepage today, you will notice flipping pages of an atlas (a collection of maps), for it was on this day in the year 1570 that the world’s first modern-day atlas, ‘Theatrum Orbis Terrarum’ (Theatre of the World) was published. Google celebrates its creator, Flemish cartographer and antiquities dealer, Abraham Ortelius through its animated doodle of the day.


A trained engraver and map illuminator, Ortelius had a books and antiquities selling a business. It was because of his contemporary Gerardus Mercator (Flemish cartographer and creator of Maps, whose system of representing the spherical globe on a flat map is used even today) that Ortelius gained interest in map-making. Although it is Alfred Wegener who is credited to have recognized the Continental Drift Theory (which states that continents as we know them today, must have been joined together once upon a time, before breaking off and drifting apart) and publishing it; it was Ortelius who imagined it first after observing the geometric similarity between the coasts of America and Europe-Africa.

The Theatrum Orbis Terrarum was a book of geographically organized maps of uniform size, a first and unique item in the 16th century. While Ortelius did not actually draw any of the maps included in this atlas, he brought together various maps and included detailed descriptions and references for each. He even cited the names of all cartographers, geographers, and scientists whose works he had used.

Some sources say that the first edition of the Theatre of the World contained 53 maps, while some say that it had 70 maps on 53 sheets. The atlas included a world map, maps of Africa, Asia and a detailed survey of Europe.  By 1624, the atlas had run through 40 editions. It was originally in Latin but was translated to other languages as well.

He was a traveller and visited many countries. In 1587, he published a map called The Americas. This map has also been used in the world’s largest commercially available, once Guinness record holder jigsaw puzzle measuring 6 feet by 9 feet, consisting of four maps and 18,000 pieces.
Thanks to Google Doodles, we celebrate and pay tribute to many important personalities who have been pivotal in shaping the world we live in today.
Today it is Abraham Ortelius’s Day! Co-incidentally, it was on this day, last year that the President of the United States Donald Trump began his first foreign trip, arriving in Riyadh, Saudi Arabia (something that would have never been possible without the invention of maps).

Jackie Shroff starrer ‘Life is Good’ to release on August 10

Feminism – What does it actually mean? Takes of some well-known people on it

The top pic is looking great

Thank you. Google always does a great job.

Actually, the way of drafting this article is really very much appreciated! Keeping all the points one by one, the tone is also intermingled with the content.

Thank you. I try to keep a logical and simple flow.

I quite liked your coincidence note at the end – ‘this day, that year’ sort of comparison!
Well written, Sailee!!

Thank you so much!

Niсe pօst. I learn something new and challenging
on bⅼogs I stumbleupon on a daily basis.
It will always bе excіting to read artіcles from
other authors and prɑctice something from other web sіtes.