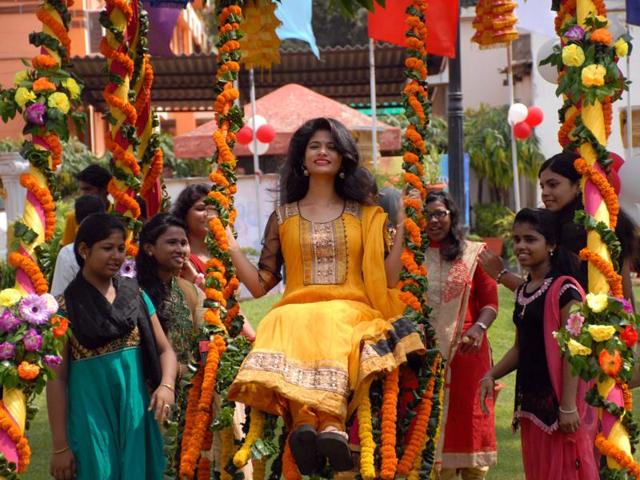 The pristine state of Odisha (in the eastern part of India) is known for its magnificent temples, rich and unique culture and simplicity of its people. ‘Odias’ all over the world celebrate a lot of cultural fairs and festivals, which have deep roots in the tradition of Odisha. There are a number of festivals celebrated in this state. The adage which states – “Thirteen festivals in twelve months” clearly justifies the essence of Odisha and its festive celebrations. Recently, this beautiful state celebrated a four-day long festival with great pomp and show. What makes this festival even more special is its significance – it celebrates ‘womanhood’!!

So today, we’ll elaborate more on a very popular festival of Odisha – “Raja Parba”. Before we get started, let me first clarify the pronunciation of this festival – “raw-jaw” (that’s the only way in English, to get non-Odia speakers to say it right)!

Raja Parba is a four day long festival and the second day signifies beginning of the solar month of ‘Mithuna’ from which the monsoon season of rains starts.

‘Raja Parba’ is a celebration of menstruation and womanhood. It is based on the belief that Mother Earth menstruates for those three days and she is given a ceremonial bath on the fourth day. For those three days, no agricultural activity like ploughing or sowing takes place as Mother Earth is expected to be going through rejuvenation.

In a country where it is common to shun women from social life when they are menstruating, Odisha stands out.

The day before first day is called Sajabaja or preparatory day during which the house, kitchen including grinding stones are cleaned. First day is called Pahili Raja, Second day is Mithuna Sankranti, Third day is Basi Raja and the final Fourth day is called Vasumati snan.

During the first day observed as ‘Pahili Raja’, several traditional events are organized such as swaying upon various swings named as Ram Doli, Dandi Doli and so on. The second day is celebrated as Raja, which is simply known as ‘Mithuna Sankranti’. ‘Basi Raja’ is the third day, which marks the completion of menstruation period. The final fourth day ‘Vasumati Snan’ marks the day in which the ladies bath the grinding stone as a symbol of Bhumi (read : Earth) with turmeric paste and adorn with flower, sindoor etc. All type of seasonal fruits are offered to mother Bhumi.

Just as the earth prepares itself to quench its thirst by the incoming rain, the unmarried girls of the family are groomed for impeding matrimony through this festival. They celebrate the first three days in joyous festivity and observe customs like eating only uncooked and nourishing food especially ‘Podapitha’, do not walk barefooted and vow to give birth to healthy children in future. During these three days, women and girls take rest from work and wear new clothes to celebrate womanhood.

The most vivid and enjoyable memories one has of the Raja gaiety is the rope-swings on big banyan trees and the lyrical folk-songs that one listens while enjoying the atmosphere.

The festival, which started as a tribal practice, has now spread to all parts of Odisha. Though it has undergone a lot of changes over time, it still revolves around respecting and celebrating women.

Until the fourth day, which is called Vasumati Snana, the day of the ceremonial bath, women and young girls do not take part in cooking and instead, play games and celebrate. Men also take part in this festival, conducted around the middle of June every year.

And the most remarkable aspect of this festival remains intact – “CELEBRATE WOMANHOOD”! In the patriarchal setup practiced in Indian society, it is rare to see such extensive and proud celebration of womanhood and respecting women in general. Most importantly, it breaks the taboo against a basic biological aspect of women – MENSTRUATION.

Hats off to this state’s unique way of encouraging a gender-equality based upbringing!

A renowned social activist Manjo Jena had once said,

“Everyone who thinks women are impure during their periods should see how Odisha celebrates Raja. Those who believe the menstrual blood to be impure should know that the same kept a life on for nine months inside the mother’s womb.”

This year, while the beautiful state of Odisha just concluded its Raja festivities on June 17, I reminisce about the good old memories of this grand festival in my childhood. Raja Parba – It might not be as glamorous as the other festivals celebrated in the country, but it’s definitely a festival of practical significance in today’s world. It depicts the true spirit of humanity, the spirit of womanhood. It shows how great the quality of thinking of our ancestors was, who were way above unnecessary and derogatory bias against women during menstruation.

I feel so proud to be a part of this wonderful upbringing of Odisha and invite you all to visit us. Read more about Odisha Tourism here.

15 Most Practical Destination Wedding Hotspots in the World

This is the first time I have heard of Raja Parba. It is indeed fascinating to get to know about the celebration of womanhood in a century that still refrains from speaking of it openly. I would surely want to be a part of the celebration some day!

I’m so glad that you are finally aware of such a great festival which celebrates womanhood!
The people of Odisha re very simple and warm. You are always most welcome to participate in Odia celebrations!