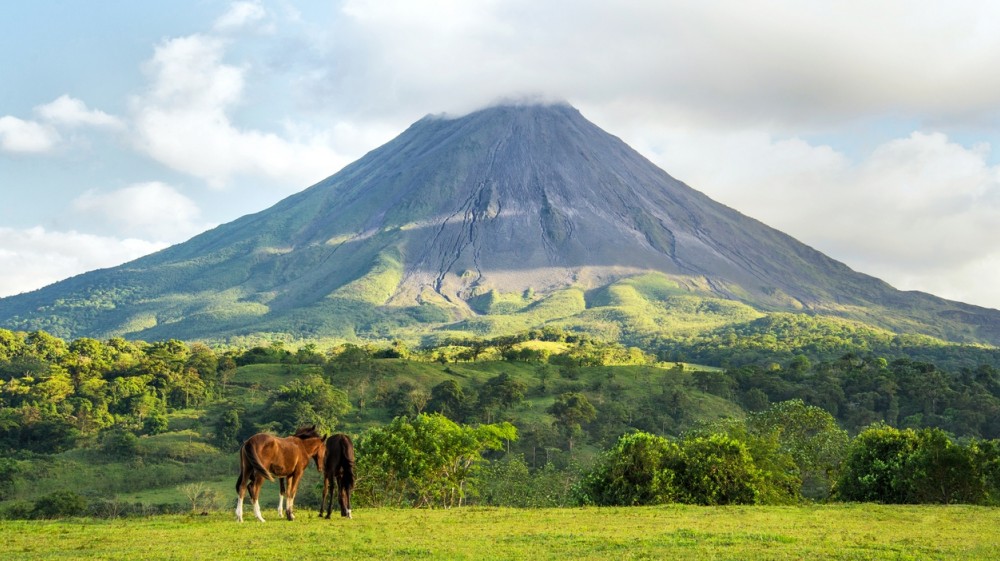 The amazing view of Arenal Volcano, situated in a unique town of Northern Plains named La Fortuna of Costa Rica, is considered as one of the best places where visitors visits for relaxing, having fun and getting a break amidst nature. This place also serves as one of the busiest tourist spots in Costa Rica that features very notable landscapes of the country.
The very impressive Arenal Volcano is situated within 29,960 acres of Arenal Volcano National Park. It is a pyramid shaped stratovolcano with a height around 1,633 meters i.e. 5,300 feet above from the ground and is shaped perfectly like a cone with 140 meters wide crater on the top. According to the researchers and geologists, this volcano is pretty young than others where its age is estimated less than 3,000 years ago.
For hundreds of years, this volcano remained asleep and unveiled a single crater at its top along with few fumaroles’ activities covered with dense vegetation. Last eruption that took place in the mountain was in the year 1968 July. From that day onwards, this volcano emits vapours of water and gasses along with other emissions of pyroclastic elements and firm rumbles at regular interval.
From 1995 to 2008, Arenal Volcano presented few significant activities that showed both eruptive and seismic nature of it, nevertheless, its tendency kept reducing. Geographically, this area belongs to nearby volcano named Chato, who is also considered its brother and Sierra de Tilaran.

Arenal is covered mainly with rainforest in which its National Park encompasses 4 types of lifestyles, harbouring tremendous amount of flora and fauna. Out of 850 species of birds, nearly 75% of them have been identified alone in Costa Rica including other creatures like deer, capuchin monkey, snakes, sloths, coati, boa constrictor, parrot snake and famous fer-de-lance to name a few. The adjoining volcano named Chato also have a tremendous height of 3,740 ft but have remained inactive for some 3,500 years due to which its crater is filled with aqua blue water.

Before exploring the exciting feature of this volcanic mountain, we would like to shed some light upon those events that can take place in near future also and thus it is advised to check with Park controllers before entering in any risk zoned area of Arenal volcano.
Twenty years ago, a group of hikers based out of La Fortuna took people up to the west ridge of the crater’s rim. Tourists were often injured and occasionally killed even due to toxic fumes and rolling cinders. After a huge explosion in 1968 swept two adjoining towns after which the entrance to the mountain got restricted to Park officials and geologists only.
After the lava flow and big eruptions stopped, guides started again taking people to the crater. Rolling boulders and huge landslides still occurs on daily basis along with toxic gases venting out at potentially fatal conditions. So, it is extremely dangerous and illegal to move around restricted areas although you may always find someone out there who will show you anything for a decent price.

The La Fortuna waterfall of little farming town near Arenal Volcano is famous for its beautiful view and considered as most beautiful waterfalls in the country. This may be another reason also due to which La Fortuna is such a popular place! Fortunately, one can arrive there by foots only i.e. through 15 minutes hiking or a horse back ride. Within lush greenery of rainforest and dense vegetation, La Fortuna plunges 200 feet into a crystal-clear pool of blue water. Next time you visit there do not forget to carry a swimsuit for this pool is extremely cool even in hot summer days.

At the very base of Arenal volcano lies the largest lake of Costa Rica named Lake Arenal. The lake which is surrounded by active volcanoes and green forest itself is worth visiting. This lake not only provides visitors with spectacular view but also indulges them in activities like kayaking, paddle boarding and fishing that can be enjoyed during day times near the lake. For readers and romantic couples, a sundown dinner cruise is available that can be booked for viewing those sights that can become beautiful memories.

If you think that Arenal consists of beautiful landscapes above the ground only, you must rethink again. Venado Caves are underground wonder world made out of limestone channels and are older than 20 million years! This unique experience will require you hiking below 8,850 feet into the earth in which subterranean animals resides and fossils are found. Wading through an underwater river and guided by a professional guide who can explain you about history of unique ecosystem present there, you can see stalagmites, waterfall and stalactites

Another remarkable region of Arenal volcano that serves tourists with backdrops of charming is little town of La Fortuna. The town is centred between a colourful and vibrant park that also have a beautiful church in its centre. The town have very few streets with restaurants and tourists’ shops lining the roads surrounding town square. This town serves as a meeting point for travellers who seeks to experience the range of activities available around Arenal region.

If you ever visit Arenal volcano, do visit Cano Negro National Wildlife Refuge that requires taking a one-day tour while exploring huge network of marshes and rivers. This refuge is one of the thriving habitats consisting variety of bird’s species like roseate spoonbills, Jaribu storks and egrets.

The Balsa River situated in the area of Arenal is very famous for river rafting. Having class II and III rapids, rafting in Balsa river becomes suitable for individuals of all ages and different skill levels. The rafting nearly ends after two hours when you can envisage magnificent forest landscape. The Sarapiqui River proves comparatively challenging that has class III and IV rapids. So, do not miss wildlife landscape if you ever go paddling along this forested waterway.

Hiking through a private nature preserve area that has fully maintained trails along with series of hanging and fixed bridges can add on to the exciting visit at Arenal volcano. The naturalist guides available there will show you flora and fauna present like rare plants and flowers along with wildlife including sloths, tree frogs, monkeys and many more.

After an adventurous trip and visit to caves and river rafting, all you need is to relax your muscles and body. Arenal also homes many natural hot springs from where mineral water flows out that can give you a very relaxing and soothing sensation. The heat in the water is due to the heat present underground that even forms bubbles in water that acts as a natural therapeutic. The hot springs are even used for treating diseases like rheumatism along with other ailments from more than hundreds of years in that place. What could be better than getting a relaxing bath amidst jungle and covered by a beauty of volcano right after days of adventurous hiking?

Why road accidents are on rise in Kashmir