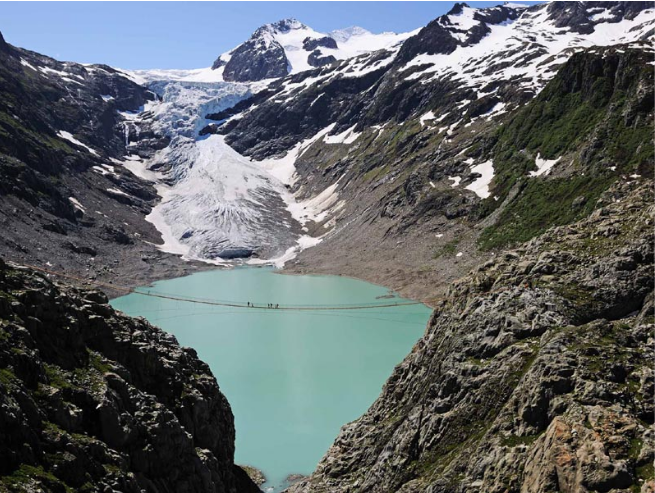 The pedestrian bridges create a great impression along with providing sweeping views for innovative features, for instance, ability to rise up or roll sideward like a turning wheel or characterised with solar panelled LED lights and generators. Above all, they provide us with those travelling experience, in foot or in wheels that leaves a memorable impression for years.
One of the factors that have increased pedestrian footbridges around the world is human development and new lifestyle pattern especially in the areas that are covered with natural beauty and is desired to be seen in while walking.

This bridge is very popular in social media and must be known to most of the people around the world. The Zhangjiajie Bridge is also one of the famous tourist attraction spots that hangs above 1,200 feet from the ground. Below the glass bridge, you can see Rocky Mountains valley that seems to have parted recently or have fallen due to sudden collision. To create illusionary effects, some of the glass bridge panels shows special video effects which looks as if the glass has cracked or might fall of any moment. This illusion has sent many tourists to the verge of crying out of panic that has further been filmed by their friends and family to post it in social media sites.

In recent years, China has created some of the most extreme bridges and have joined in the list of marvellous creators throughout the world. The Mount Hua Plank Walk is one of the bridges that have lived for more years than any other bridges in the world. The bridge constitutes a mixture of ladder and bridge that enables travellers move up to face the mountain. This bridge was created by ancient people to visit a temple situated 2,000 feet above in the mountain where people still visits with the help of this bridge. This bridge travels all the way through the mountains, beside ravines and clefts to continue moving upwards i.e. the top of the mountain. Surprisingly, the main material used for this bridge is wooden planks that are twined together with ropes. No guard rails or side-supports are provided to these planks due to which many people fell off each year, certainly I would not suggest you to go there.

This is another peculiar kind of bridge that sinks along from one hilltop to the other and gets undulating shape due to yellow balau wood and steel ribs. The wood for Henderson Waves Bridge is sourced from farms in South East Asia. Bench seating carved into the bridge curves provides shelter for alcoves that adds to the beauty of city skyline and trees seen from 118 feet above the Henderson road.

Vancouver is one of the beautiful cities situated in British Columbia. In the northern side of this city lies a suspension bridge that attracts millions of visitors each year that seems to be increasing every year. The main feature of Capilano Suspension bridge is its self-guiding hike going through the Pacific rainforest. This bridge hangs 300 feet above river canyon and is attached to a treetop walkway on both the ends. Although this bridge’s description seems to be very odd, the fact is many people just keep swaying and jumping on it to make the passer-by’s experience a panicky state just for the sake of fun.

This bridge has become a tourist destination in its own for which you need to hire a cable-car that rides one of the steepest rides in the world just to reach Langkawi Skybridge. This bridge, above Mount Machinchang hangs more than two thousand feet above the sea level. The Skybridge was opened for public in the year 2005 and it is said that most of the material to build the bridge was brought to the spot via helicopters. The bridge has a cable-stay that bends around one single support pylon that provides the bridge with rain forest’s shifting perspective, oceans and waterfalls while you cross the bridge. The bridge has been upgraded recently in which a glass bottom was attached in its middle section to make your walking experience more adventurous.

A skinny and hanging pedestrian bridge is built in the outskirts of Ballintoy of Ireland that connects two major islands over there. This bridge also crosses stormy waters of North Atlantic Ocean and is often seen covered with slick water due to excessive rain and fogs present in Ireland. This bridge is also considered as one of the scariest bridges in the world. Carrick-A Rede bridge is 100 feet above the sea level that joins two cliffs of more than 60 feet long. This bridge is said to be more than 350 years old that was built with merely a rope and wood which has been renovated in recent years around 2008.

This bridge has been opened for public since 2004 that attracts many pedestrians, cyclists and party posing people posing for pictures taken in bridges cocoon. Webb Bridge, as the name says looks like a web design inspired by aboriginals’ baskets and fish traps. This bridge has been designed by a local artist named Robert Owen along with architect Denton Corker Marshall who incorporated bridge materials that looked like original rail bridge across the famous Yarra River of Melbourne city expanding at the Docklands.

Although Ghana is not considered as famous tourist destination, the Kakum Canopy Walk, according to me is worth watching once in lifetime. Kakum Walk bridge is situated amidst Kakum National Park that has got some of the endangered animals on earth like African elephants and Diana monkeys. The bridge itself looks like a wooden bridge loosely attached to a rope that dangles above the tree tops. The bridge is around 2,000 feet in length and remains 200 feet above the ground level from where you can see forest region filled with animals and rare birds.

Switzerland, the land of wine and yodels reminds us of fresh cheese and natural views that even soothe sore eyes. This country also has Trift Glacier bridge that is suspended 330 feet above one of the ices and rock canyon that shows anti-gravitational force in it. It is expanded in more than 550 feet area and allows travellers walk over the glacier. However, the main concern that doubts the existence of this bridge in upcoming years is increasing global warming that tends to melt the glacier. If the glacier keeps on melting, Trift Glacier bridge will not be seen in future and therefore the bridge caretakers keep on working to keep this bridge attached to the mountain surface.

The Arenal Hanging bridge can be found at active Volcanic belt of Arenal National Park of Costa Rica and is also one of the most visited tourist spots at an active volcanic site. The super scary feature of this bridge is actually series of bridges at one place. The bridge is a part of self-hiking trail that travels through the lush rainforest meandering along the treetops. The bridge hangs above 190 feet from the ground that will give you some spectacular views of forest and mountain valleys filled with greenery and rare animal species.