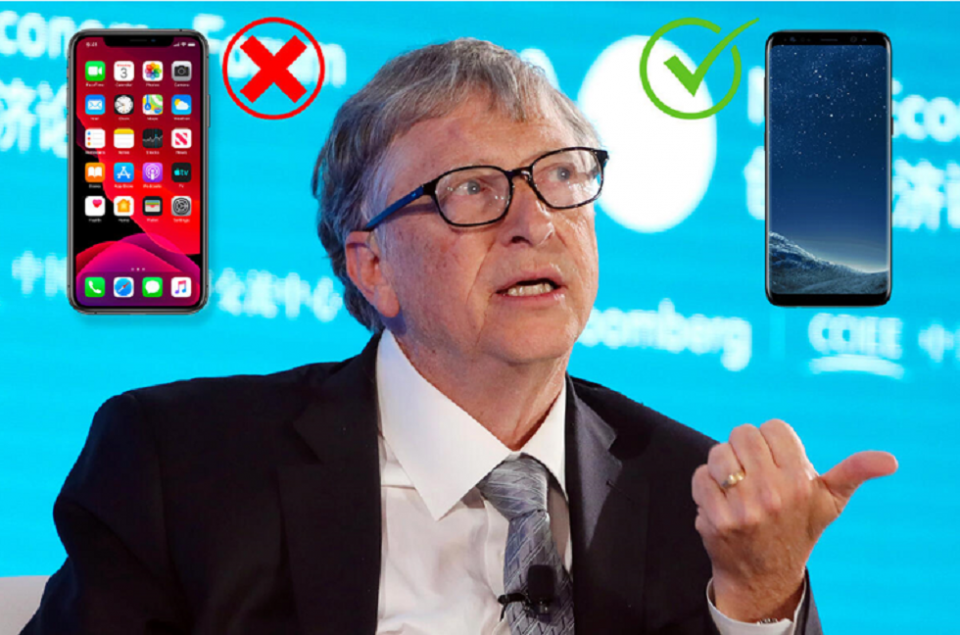 The debate surrounding Android versus iPhone has been around for decades. With strong backers on both sides, it becomes difficult to make out which one of these will win the ultimate battle for winning consumer’s heart. Although iPhones have succeeded to a great extent and remarkably accomplished the cult status, Microsoft co-founder and philanthropist billionaire, Bill Gates has recently revealed that he prefers Android over iPhones due to many reasons. The reasons put by Gates in an interview do make a lot of sense which is why we can assume that Gates statement made on Android over iPhones can have few impacts on iPhone sales. Speaking of the interview, Gates gave an audio-only interview to the app named Clubhouse where he said that he likes Android the most because it comes with few pre-installed Microsoft software’s.

In an interview with the app Clubhouse, Gates told the journalist named Andrew Ross Sorkin that since the time he proclaimed his preference for Android, nothing has changed. According to Gates, you may find iPhone handy, for example when you need to use it for entering the Clubhouse. For other daily needs, you must have an Android device due to its simplicity and ease of use.

Bill gates not only likes the open nature of Android’s ecosystem but also its flexibility and the way software interact with other operating systems. In the interview Bill Gates said,

“I actually use an Android phone. As I want to keep track of everything, I often play with iPhones, but the one I carry with me is Android,” Gates revealed.

Gates explained, “Some of the Android makers pre-install Microsoft software in a way that makes things easier for me. They are more flexible about how the software connects with the operating system. So, I got used to that. You know, a lot of my friends have iPhones, so there’s no purity,”

How the question arose?

The question regarding Android versus iPhone rose because Bill Gates was having a chat with Sorkin in the Clubhouse app. This forced people to ask if the Microsoft co-founder would like to switch to Apple’s iPhone or not. The Clubhouse app is not available for Android users to date. The App in which Gates chatted supports iOS devices only.

What Is This Clubhouse?

The Clubhouse Audio Chat app can be installed from Apple Store only and has currently more than eight million downloads. Although the app can be availed on Google Play Store you cannot sign in from there. The Clubhouse company is still working on that issue. Other than this, the Clubhouse app is an application that allows users to enter into audio chats only. The social networking site looks as if various podcast like conversations have taken place. At present, only iPhone users can use this app and get it by invitation links only.

Analysis of the statement made by Bill Gates

In the past, Bill Gates had once admitted how Windows was outshined by Android that seek to become Windows of smartphone mobiles used worldwide. In reality, Android killed the efforts made by Microsoft to enter into the smartphone realm with an operating platform had to compete with iOS. Bill Gates took the responsibility for the failure and for his mistake that made Android become go-to-alternative preference for iOS.

Earlier, Microsoft had released their smartphones but gradually had to shut them because of apps shortage. Since then, Microsoft partnered with Google to make a foldable Android phone named Surface Duo. This is the reason Microsoft became an integrated part of another smartphone manufacturer like Samsung. Samsung too made Galaxy S8 which is a Microsoft version and features Microsoft apps and services such as Cortana, OneDrive and Office.

Ironically, the statement where Gates revealed that he prefers Android over the iPhone was conducted on an App Clubhouse which infamously runs only on iOS devices such as iPads and iPhones. While iPhone enjoys a whopping 45% market share in the US, Android has a remarkable 70% share in the rest of the world where Samsung, OnePlus, Huawei and Google devices lead the market.

When Gates was interviewing in the iOS app with Sorkin, he spoke about other topics as well such as Bitcoin, ongoing pandemic and other Android phones. While replying to some other question, Gates admitted that since many of the Android phones comes with pre-installed Microsoft software, he feels easier to use them.

Can Bill Gates preference for using Android over the iPhone impact iPhone sales?

Of course, one of the biggest differences between Android and Apple’s phone is that Microsoft does not design operating system for Apple but it does for Android which is why Gates jumped to Android notably. Bill Gates made an offhand remark while responding to the question about his relationship with his friend Steve Jobs, the phone he uses and how he believes iPhone is.

The exchange of conversation was first noticed on a news site. Since then, many iOS users have installed Clubhouse app to listen to the conversation. Although we are not sure whether or not iPhone sales will be impacted due to Bill Gates love for Android phone but it is feasible that his preference might stimulate the Android phone market worldwide.

Skin Serum Guide: How to Choose the Right Serum According to Your Skin

Bradley Cooper Battle with Addiction and Path to Sobriety