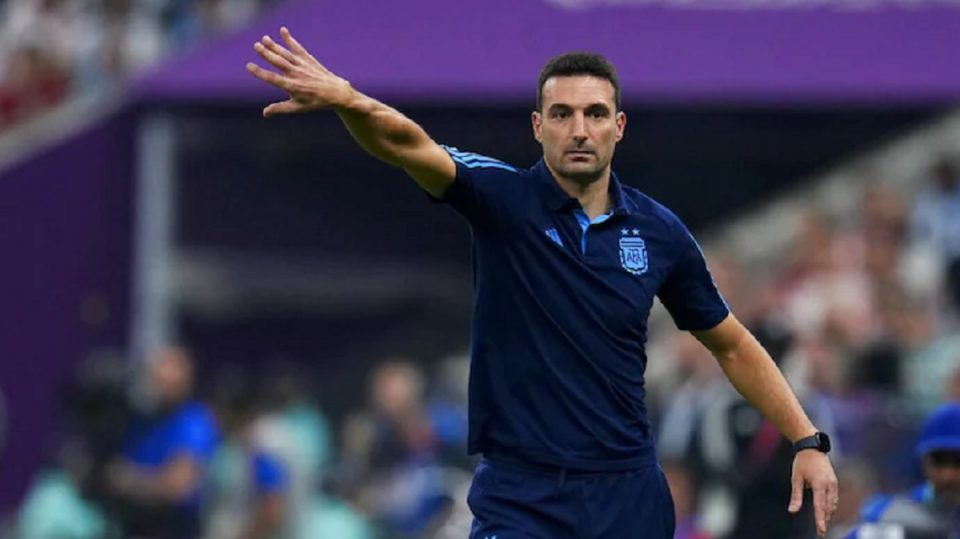 Match by match, we scan the x-ray of Lionel Scaloni’s strategies for this world cup that helped him win the World Cup. One of our clues is that he may have repeated the same tactics, but never the same players.

Lionel Scaloni: Did He Help Build The Most Versatile Argentinian Team for FIFA 2022?

Tactics and strategy: Scaloni’s thoughts during the World Cup

After a 36-year wait, the Argentine National Team was crowned world champion at the 2022 World Cup in Qatar. We need to mention that the team did it under the technical direction of Lionel Scaloni, a coach who arrived among whispers and today is located in the pantheon of the great history of the Argentinian national team.

Beyond his low profile and the work of his coaching staff, one constant was present during his adventure on Qatari soil: tactical and strategic manifestations.

The association football manager never repeated the team and practically settled according to the rival. Let’s review the different variants that forged the path of the champion.

The things that stopped Messi, Argentina and the globe as a whole, happened against Saudi Arabia and it was a 2-1 defeat, a result that shook the tranquility of the WORLD.

That day, Scaloni put together a 4-4-2 formation that differed in three details from the one he faced France in the final. First of all, the starting nine was Lautaro Martínez, who despite the enormous sacrifice shown, ended up losing the position at the hands of Julián Álvarez. On the other hand, Alejandro Papu Gómez was chosen to fill in for the absence of Giovani Lo Celso, who missed the World Cup due to injury. Likewise, Leandro Paredes and Rodrigo De Paul shared the center of the Argentine midfield.

Both Papu and Paredes would end up changing their roles throughout the World Cup: the first, as an alternative to come on from the bench until he sprained his ankle; and the second, to possess the ball and to call upon the midfield. They were also coming from the bench when the team needed it.

Following the same tactical system, the second game consisted of different players which became key to the Argentinian national team to continue their World Cup ambitions.

Once again the DT stopped a 4-4-2, but with other interpreters. To begin with, the only defense that repeated from the first game was Nicolás Otamendi.

In midfield, Guido Rodríguez added minutes as a starter in place of Leandro Paredes, while Alexis Mac Allister would give the first signs that he was going to be almost irreplaceable for Argentina in Qatar.

Di María, for his part, would carry out the double task of supporting midfield and adding to the attacks, so that the system at times became a 4-3-3. Likewise, during the match a player would enter who would end up establishing himself as one of the figures of the Scaloneta in the World Cup: Enzo Fernández, who also scored a goal.

With a better rhythm and having given better footballing samples against Mexico than in the debut, the third game against Poland was provided for Lionel Scaloni’s first tactical change: a much more offensive 4-3-3 against a European team that bet to hold the result and throwing pitches at his star striker, Robert Lewandowski.

Romero and Nahuel Molina returned to defense, while Acuña continued on the left side and Otamendi did not move as the second central marker. In the midfield, Alexis and Enzo would be starters so as not to leave again, while De Paul continued as the engine of Argentine soccer.

It was known that the Polish team was going to withdraw as much as possible and completely cede possession of the ball. Scaloni was aware that he had to take advantage of this context to promote that pragmatic philosophy that was emerging little by little, recover his footballing identity and establish the best performers on his squad as starters: Alexis MacAllister, Enzo Fernández and Julián Álvarez from the start in a Traditional 4-3-3 that was transformed into a 3-3-4 – with Huevo Acuñapractically as a left winger – who did not give Poland a chance to respond.

After Alexis made it 1-0 at the start of the second half, Paredes came on for Di María to form a 4-4-2 that freed Enzo Fernández, mastermind of the goal that Julián Álvarez converted to increase the lead. And at the end of the game, Scaloni put together a 5-3-2 again by giving Germán Pezzella an entry for Enzo.

Although Szczęsny saved Messi’s penalty and the goalless draw lasted until the second half, the team showed that they were mentally strong. Cuti Romero annulled Robert Lewandowski, while Enzo and Alexis gave another rhythm to the midfield and Julián Álvarez showed that his deployment could be vital to free Messi from any defensive responsibility. The captain missed the penalty but the team did not fall apart.

Australia vs Argentina for round 16:

Ángel Di María’s loss due to injury represented a greater obstacle than the rival himself. Scaloni opted for the usual 4-3-3, with Papu Gómez on the left and Julián Álvarez moving from the center to the opposite band, although he ran into a very withdrawn rival and changed again on the fly: he mutated a 4-4- 2 with Papu as the right midfielder, closed De Paul, and left Messi up with the Spider.

They won 1-0 at halftime thanks to another genius from Leo Messi and, at the beginning of the second half, he put Lisandro Martinez in Papu’s place to face a second half with that 5-3-2 that was beginning to convince DT. Argentina suffered more towards the end, but prevailed and advanced to the quarterfinals with a superlative performance by Messi and also Rodrigo De Paul who recovered the ball. Dibu Martinez also made a key save on the last play and Nicolás Otamendiagain emerged as the leader of the defense against a physical opponent.

Netherlands in the quarterfinals:

Lionel Scaloni decided to match Van Gaal’s tactical disposition for Argentina to defeat the Netherlands with Di María still out of his physical prime. For those who don’t know Louis van Gaal, a famous strategist who worked in elite clubs (Ajax, FC Barcelona, ​​Bayern Munich and Manchester United) for 25 years redefined the identity of Dutch football with his pragmatic style.

Lionel Scaloni matched the rival’s tactical disposition – similar to Mexico and Australia by choosing to put a 5-3-2 formation from the start that gave a lot of prominence to his full-backs, now converted into full-backs.

Logically, Nahuel Molina and Huevo Acuña were chosen for their offensive characteristics and the right winger combined with Messi to score 1-0 in the first half (’35).

Messi took charge of the 2-0 with a penalty goal that was committed precisely to the person in charge of transiting the left wing. But Van Gaal moved chips to gradually put together a 4-2-4 with double ‘9′ and filled the area with centers for Luuk De Jong and Wout Weghorst, maker of the goals for the 2-2 that forced extra time.

Dibu Martínez hadn’t even started the shootout and had already taken center stage, and then he stopped the first two shots to put the classification back on track, which was sealed by Lautaro Martínez, a player who had lost ownership but demonstrated his importance to the group.

Argentina beat Croatia 3-0 to reach the final against France:

The duel against Croatia in the World Cup semifinals was perhaps the greatest demonstration of superiority that the Argentine team had in the Cup, leaving aside the 80 minutes in which they dominated France in the final.

For the match against Luka Modric’s team, Scaloni returned to a 4-4-2 formation, although the interpreters were different from those at the start of the World Cup. Leandro Paredes returned to the starting team without Di María, coupled with Enzo Fernández, taking over half the playing field. Rodrigo De Paul and Alexis Mac Allister provided the deployment and support from the wings.

In defense, Molina remained but Nicolás Tagliafico returned, while Romero and Otamendi ‘s office continued to serve the public in the central defense, without letting striker Andrej Kramaric breathe and enduring the attacks of the European team.

France vs Argentina, the riskiest operation with the highest reward:

From a team of cadets to the World Cup final, Lionel Scaloni silenced the critics as the winner of the 2022 World Cup against France.

Ahead of the World Cup final, Lionel Scaloni warned France saying: ‘We know how to attack them and we have established a clear plan’.

Argentina’s coach’s starting lineup included a line of eleven starters that will jump onto the playing field of the Lusail stadium with two main distinctions regarding the players who competed against Croatia in the semifinals.

The final of the Qatar 2022 World Cup saw a change from the one that started the semifinal against Croatia but maintained the scheme with four midfielders. For the defining match at the Lusail stadium, the coach resolved a plan of four defenders, four midfielders and two attack references. The one who earned a place to go from the start is Ángel Di María, replacing Leandro Paredes and the other player who got replaced was Marcos Acuña who had Nicolás Tagliafico take his place.

In the farewell training session at the University of Qatar, Argentina’s coach bet from the start with a block of five defenders: Nicolás Otamendi, Lisandro Martínez, Nahuel Molina, Cristian Romero, and Marcos Acuña. The speed on the wings is what worries Lionel Scaloni the most, therefore, this alternative is presented as the most probable for the start of the last match of the Argentine team in the World Cup.

After testing how the team moves with this proposal with a few more precautions (the same ones against the Netherlands) Lionel Scaloni supplied Di María in midfield.

Next, he used a strategy to control the sharp attack by the French wings, with Ousmane Dembélé on the right and the duo of Theo Hernández and Kylian Mbappé on the left. The objective of the scheme was also to be able to do that without neglecting the background and creating an eight-man lock between defenders and midfielders who narrowed the spaces to the PSG star Messi.

Yes, Messi was the greatest threat to the French but he would recover with experience and Lionel Scaloni’s idea was to get out quickly with Messi and Julián, and have Di María as a third option in attack.

What Causes Severe Sleep Apnea and How Is It Treated