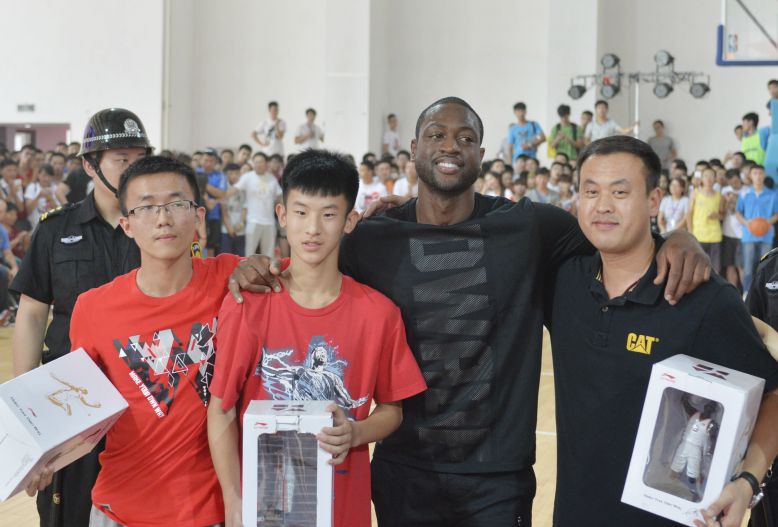 As far as absolutes in the NBA go, Dwayne Wade being the best player in the Miami Heat’s franchise history is one of them. Since the time he was selected 5th overall in the legendary 2003 draft, Wade has razzled and dazzled his way into the hearts and minds of the Miami Heat faithful. Yes, Alonzo Mourning has also been extremely instrumental in the success of the franchise. Legends like Shaquille O’Neal, LeBron James, Chris Bosh and Ray Allen have played for (and won championships with) the Miami Heat. However, the contribution of Dwayne Wade exceeds theirs by far. Wade isn’t just the face of Miami Heat basketball, he is also, along with legendary Miami Dolphins quarterback Dan Marino, the greatest athlete in Miami sports history.
The 3 time NBA champion, once dubbed “America’s favourite high-flyer” is in the twilight of his NBA career. After an average year playing for his hometown team, Chicago Bulls, Wade joined forces with his close friend LeBron James for half a season in Cleveland. However, at the trade deadline, he was shipped back to Miami, so that he can receive a hero’s farewell from the team that he spent most of his career on. However, the emotional re-union could be really short lived.
Dwayne Wade is an unrestricted free agent right now and a re-building Miami Heat team isn’t really keen on investing a lot of money on an aging superstar with bad knees. As a result, rumours of a move overseas have started floating around the humid air of Biscayne Bay.
Chinese Basketball Association’s Xianjiang Flying Tigers are reportedly preparing a ‘monster’ offer for Wade, according to Sportnado. It’s likely to fall in the Godfather’s ‘offer you can’t refuse’ territory. Dwayne Wade, who is affectionately called ‘Dian Wei‘ (A famous military officer who served and died under Cao Cao of the Eastern Huan dynasty) by his Chinese fans, is currently touring the country. Chinese shoe brand Li-Ning has reportedly signed Wade to a lifetime deal worth tens of millions of dollars.  With all those Chinese connections, a move to China to end his playing career doesn’t seem that unlikely. However, his wife, Hollywood star Gabrielle Union wouldn’t really want to move away from America for the sake of her career and his kids might not be very thrilled about studying in a chinese school either.
Even though the Heat don’t want to invest too much money on Wade, they are still very interested in retaining their franchise icon. However, Wade has made it clear that he will only make a decision upon his return from China. This is what he had to say to the Associated Press: “When I get back from China, I’ll focus on that. Right now, I’m focused on the game after basketball. Whatever happens in basketball, it happens. I’ve done everything that I can to this point to put myself that I’m in this position I am today, where I can do something that hasn’t been done globally yet. The basketball will take care of itself. I’ll sit down and figure that out once I get back from this tour at some point.”
From the sound of it, Wade doesn’t seem highly concerned about his new contract right now. Nor does he sound like he is decisively leaning towards one side or the other. He can re-sign with the Miami Heat, bid a fond farewell to the team and fans in the NBA (like Kobe Bryant)  and eventually see his statue erected outside the American Airlines Arena; or he can choose to take up a completely new challenge in China and work towards expanding his global brand value.