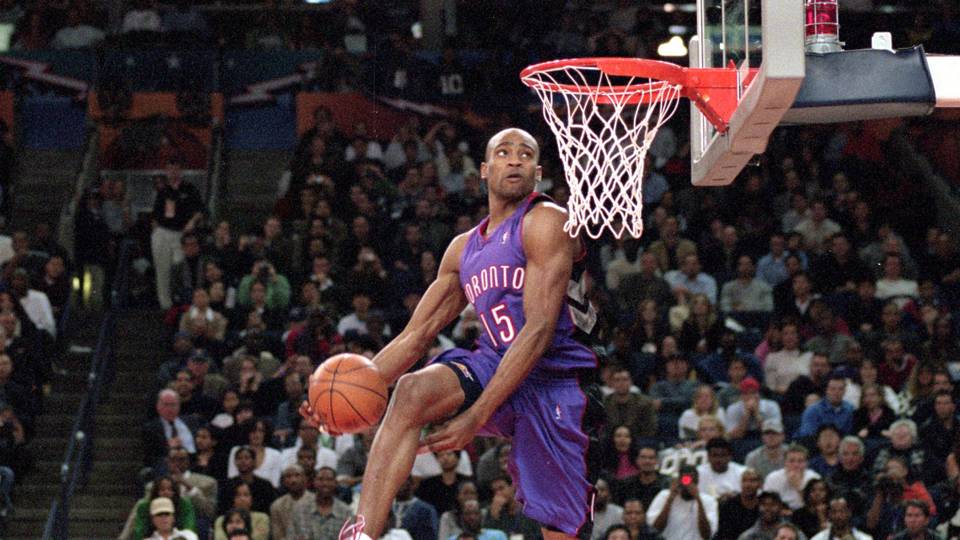 It’s official, the In-Vince-ible Vincent Lamar Carter is going to play in his 21st NBA season, and it might NOT be his last. Not so far at least.
The Atlanta Hawks signed Vince Carter to a one year, $2.4 million veteran’s minimum contract on Friday. The eighth team of his illustrious and high flying NBA career could be the last stop before his final destination in the world of sports media and broadcasting.
The league’s oldest active player will turn a staggering 42 years old in January of 2019. Being in Atlanta seems to be just the right situation for Vince Carter to land a lucrative television and broadcasting job once he eventually decides to call it quits.
After all, Atlanta, Georgia is the home of NBA TV and Turner Broadcasting. Finishing up his playing career while getting ready to embark on his broadcasting career is going to be a lot more convenient while Carter is based in Atlanta. However, Vince Carter does not seem very eager to announce his retirement just yet. Here’s what he had to say on this topic:
“I know playing this game that the media and the fans and people can be cruel. It’s like, You’re old and you’re playing against guys half your age. You shouldn’t be out here. But then for me that is my goal, to prove that I’m able to do that. And I put in a lot of work in mentally as well as physically just preparing myself.”
Vince Carter still believes that the non-stop highlight reel producing, electrifying, gravity defying dunker who earned the nickname, ‘Vinsanity’ still  lives inside him. However, the way Vinsaity manifests himself, is a lot different now. Here’s what he had to say about that:
“Yeah, I’m still the same person. My approach is still the same. My work ethic, my ability to play the game is still the same. Obviously it’s limited. You just don’t get to see it as much, but it’s the same guy.”
Age and a reserve role for the last six seasons with the Dallas Mavericks, Memphis Grizzlies and the Sacramento Kings have been two of the reasons behind that.
While most people remember Vince Carter from his Toronto Raptors and New Jersey Nets days, he also had a significant impact on the Dallas Mavericks and the Memphis Grizzlies.
While in Dallas, he mainly played the sixth man role (especially after the departure of long time Maverick, Jason Terry). Over three seasons, Carter averaged around 12 points per game while playing around 25 minutes per game. During all of that, he also passed Larry Bird on the NBA’s all time scoring list. He also passed Kobe Bryant on the NBA’s All Time 3 Pointers Made list.
His most memorable play as a Dallas Maverick came during the first round of the 2014 NBA Playoffs against the San Antonio Spurs. As time expired in Game 3, Carter hit a game winning 3 pointer to put the Mavericks up 2-1 in the series. The Mavericks eventually lost the series in seven games and the San Antonio Spurs went on to win the NBA Championship that year, thrashing the Miami Heat by a record margin in the NBA Finals.
After his contract with the Mavericks expired, Vince Carter signed with the Memphis Grizzlies and spent three seasons with the team between 2014 – 2017.
Compared to his time with the Mavericks, Carter’s minutes came down drastically during his first two seasons with the Grizzlies. He only played around 16 minutes per game and didn’t start on most occasions. However, his role increased a lot during his third season when he started 15 games and averaged 24 minutes per game.
Carter’s contribution to the Grizzlies’ team during the 2014-15 Playoffs was quite significant. He was a key contributor to the Grizzlies’ first round win over the Portland Trailblazers. The Grizzlies lost in six games to the eventual champions, Golden State Warriors in the next round.
During the next two seasons, the Memphis Grizzlies made the Playoffs and met the mighty San Antonio Spurs in the first round on both occasions. During the 2015-16 season, the Grizzlies were injury riddled throughout the year and Vince Carter was one of the key, consistent players who helped the team make the playoffs. Even though Carter started every game of the playoffs, the injury ravaged Grizzlies had no shot against the 67 win Spurs and they were swept out of the first round.
Next season, the healthier Memphis Grizzlies played a hard fought six game series against the San Antonio Spurs in the first round. Carter played 32.5 minutes per game, while averaging 9.2 points and 3.3 rebounds per game.
The end of the 2016-2017 season marked the end of the ‘Grindhouse’ era in Memphis. The team decided to move away from the grit-and-grind style of physical basketball and adopt a more modern, finesse based game. Vince Carter left the team, alongwith Grindhouse stalwarts Zach Randolph and Tony Allen.
During his time in Memphis, Vince Carter wasn’t the young high flying guy from the past. He still had some exciting plays though. This dunk over Rudy Gobert was probably the most exciting one of them all.

After leaving the Memphis Grizzlies, Vince Carter signed with the Sacramento Kings for the 2017-2018 season. His role with the Kings was primarily that of a mentor and a veteran presence in the locker room. He played around 17 minutes per game while averaging 5.4 points and 2.6 rebounds per game over 58 games as the Kings finished with an abysmal 27-55 record.
His role with the Atlanta Hawks (or quite frankly any NBA team now) will be similar. However, he chose the Hawks because they offered him a chance to earn some extra minutes of playing time. Two of the players on the Hawks, Trae Young and Kevin Heurter were born after Vince Carter was drafted into the NBA and with the way the Hawks are currently constructed, they look all set to be one of the worst teams in the NBA and compete for the first pick in the 2019 NBA draft. Once the training camp begins on September 25th, Taurean Prince, John Collins, Dewayne Dedmon, Kent Bazemore and either Trae Young or Jeremy Lin will most likely make up Atlanta’s starting five.
According to Vince Carter, he has been texting coach Lloyd Pierce frequently since he verbally agreed to a contract last month. They have mutually agreed on his role with the team, which is to be a mentor and an active leader to youngsters such as Prince, Collins and Young, the core members of the Hawks’ rebuild.
Even though the Hawks are going to lose way more games than win them, Vince Carter firmly believes in the long term future of the team. This is what he had to say: “The makeup and the makeover of what this organization is trying to do is positive. It’s in the right direction. We live in a world where we want it right now, but the reality is that sometimes it doesn’t happen that way. The potential is there to put the pieces together. My job is to come in and be like, Yeah, I might not be here a couple of years, but if I can help lay some foundation and some ideas to lead them in the right direction, that’s what I’m going to do.”
Even though, Vince Carter will be playing his 21st NBA season with the Atlanta Hawks, while being the oldest player in the league at 40 years old, he is not the oldest player to ever play for the Hawks. Carter’s teammate from the Toronto Raptors, Kevin Willis, played with the Hawks during the 2004-05 season at the age of 42. Incidentally, the Hawks had the worst record in the league that year and won only 13 games.
Even if the 2018-2019 season turns out to be that dreadful for the Hawks, Carter has said that he will not complain and demand a trade to a contender. He has passed on multiple opportunities to sign with a contender to win that elusive championship ring over the past several years. On top of that, after earning over $160 million throughout his career, money can’t really be a factor for Carter.
When presented with the idea of embracing an extremely limited role with a championship contender, Carter had this to say: “To just sit on the end of the bench, I just can’t do that. That’s just not who I am. I guess I’ve been around long enough, and what’s engrained in me and what’s been instilled in me, that’s not my thing. I come from an era where that’s not how it was. So that’s still instilled in me. And I don’t have any problem with how it’s done now. It’s just not for me. I still want to play the game. Whatever minutes are there, I want them.”
However, Carter hasn’t completely ruled out the possibility of signing with a contending team next season if he felt that his on court contribution with the Hawks wasn’t upto the mark. But he added, “I think before that happens I’ll probably retire anyway. It’s tough to walk away, I love playing. Obviously when it’s time, it’s time. But I’m still passionate about it.”
Carter also described himself as a veteran with a coach’s mentality but not any willingness to coach. He said: “I love to play, man. I have a young guy’s mentality with a 40-year-old body.”
With such a lengthy career and extrmely impressive accomplishments, Vince Carter is bound to be enshrined into the Naismith Memorial Basketball Hall of Fame eventually. However, Carter has his sight set on being an NBA broadcaster after retirement. Previously, he has worked as a guest analyst for summer league games and high profile youth basketball games. This is what Carter said about his plans preparation for the future: “I have a fear of when it’s over not being prepared for the next phase. Now that I’m nearing the end, whenever that is, I want to make sure when that door is closed and I leave my basketball shoes in the gym or where I choose to leave them, I’m ready for the next phase.”

For those wondering about Vince Carter’s eventual retirement, he’s ’90-something percent’ sure that the 2018-19 NBA season will be his last.
previous post

3 Star Athletes Who Failed At Their Second Sport