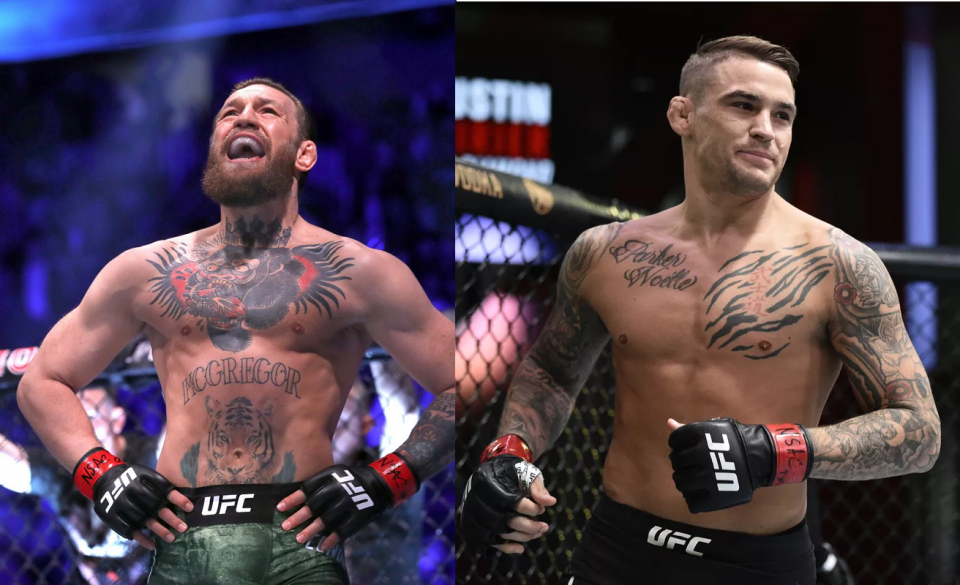 We all know who Conor Mc Gregor is. The undefeated UFC champ needs no introduction. Last time he fought with the “Russian bear” Kabib and that fight was iconic. On the other hand is the young turk Dustin Poirier who climbed the MMA ladder pretty fast. Sport enthusiasts already know that this not the first Poirier vs Mc Gregor fight that they are going to watch. Dustin has fought Conor in the past also in which Conor brought him down pretty easily. But not all fights are same. Both the fighters have evolved in their own ways after the previous fight in the past few years. First, lets take a look at what experts have got to say about this showdown and who they think is going to win this battle.

Tomorrow is finally the day for Dustin Poirier vs Conor Mc Gregor. So here some predictions from the MMA community for you in case you want to take a chance with your hard earned money.

“He is going to get sparked in the first round (Dustin Poirier) because he is completely washed up and has no chin anymore and no heart. It is not going to be competitive. I think Conor is going to spark him in first round.”

Kenny Florian in his podcast said, “I think Dustin Poirier has done a really unbelievable job of really improving as a fighter and believing in himself. I think you always saw that potential in Dustin and now we are actually seeing the mind connect with the body and the skills. He has done amazing thing in his career and has established himself as one of the best 155 pounders in the world. However, I do think that Conor Mc Gregor, when he is motivated, when he is training and when he is trying to get that belt back, he is going to be a handful for anybody. I really think he is going to be sharper. I think he is probably the most powerful striker, maybe more precise. I think Conor Mc Gregor is motivated right now and if he wins this fight, I would not be surprised to see him win and win impressively. I do not know if he gets the finish but I would be leaning that way because I do think that he is that much sharper than Dustin. Dustin is close man but I do like Conor in that one for sure.”

In the same podcast as Kenny, Michael said, “The speed of Conor’s hands is so sharp and so precise. You put it all together and whatever his antics are outside the octagon. It is a deadly combination. As a fighter he is capable of absolute destruction on a mass level because he is so f*****g good. Now, Poirier to your point is incredibly tough. He is as tough as they come and he has got better and he was young at the first match but so was Conor. Maybe it was the wrong weight class but maybe so was Conor, maybe he could take a punch better now at 145. Dustin never connected on him so that does not apply to Conor. I think Dustin is going to take a better shot. But if Dustin has got any chance of winning, it is in the later rounds but that is almost cliché to say at this point because getting into the later rounds is the hard part”

None other than Khabib Nurmagomedov also shared his opinions on what he thinks is going to happen tomorrow. In a conversation with Din Thomas, when Thomas asked him, who was going to win, Khabib said, “If it is early, it is Conor. But third round number four, I think Dustin can beat this guy.” As people will know that Khabib has fought Mc Gregor, infact Mc Gregor’s last fight was with Khabib only. Khabib knows his Mc Gregor’s tactics inside the ring thoroughly.

Anyone can infer from the above comments that Dustin has got a very miniscule possibility of defeating Mc Gregor. But Dustin Poirier has always been the underdog who shocked everyone at the end of the fight. When asked about his previous defeat at the hands of Mc Gregor, Dustin very openly confessed that last time he was not in the form. He says it does not matter if you are in the gym working out or practicing your ass out for the fight, the atmosphere inside that octagon is different, the ring rust affects a fighter differently. He also said that last time he got prey to Mc Gregor’s antics outside the octagon. Dustin fought with anger in the previous fight rather than tactics. He realised his mistakes after the fight and since then he keeps himself shut from the outside gossip before the fight. He goes off social media so that he does not have to deal with all the toxic fan stuff in the comment section and he also limits his interaction with people so that he does not get to know what his opponent is talking or saying about him. Dustin says that this tactic has helped him tremendously in the past years. Due to this habit of his, he is now able to step inside the ring with a cool mind and commit to the match with the purpose of winning, rather than going inside with the anger or ferocity.

Not only Michael Bisping and Khabib, but almost all the experts have made the same point. That if Dustin makes it to the later rounds, he can infact win. So everything now depends on how durable and tough Dustin has made himself for this fight.

Moreover, you can do all the speculation and calculation but this is MMA fellas, one right punch in the right spot can be the decision maker inside the arena.