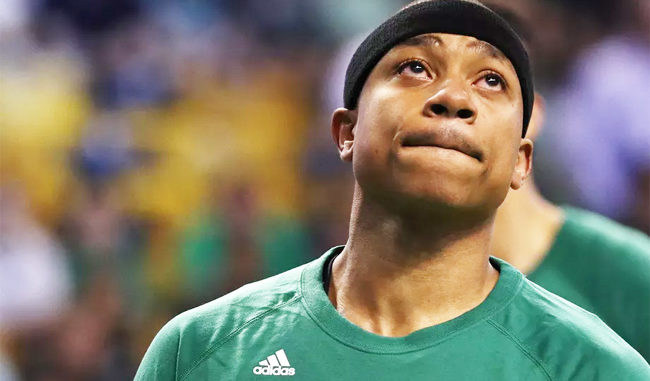 It almost seems like ancient history,  but it wasn’t much more than a year ago, the Boston Celtics’ point guard Isaiah Thomas was in MVP conversations and had famously said ‘they better back up the Brinks truck’ when asked about his next contract. The 5’9″ point guard out of the University of Washington was the 60th and last pick of the 2011 NBA draft. There was hardly any chance of Isaiah Thomas succeeding in the NBA. It’s a league of giants and most players of such diminutive stature (especially the ones selected last in the draft) don’t succeed. Most of them don’t even make the roster after the first day of training camp. Needless to say, he had an uphill task ahead of him.
Isaiah Thomas didn’t back down and rose above his challenges. He recorded his first double double in February 2012 and went on to become the Rookie of the Month. He also made the All Rookie Second Team at the end of the season. He had three solid seasons with the Sacramento Kings and was immensely popular with the fans. His public appearances during the time when the Kings were on the verge of being moved from Sacramento, endeared him to the fans even more.
In 2014, he was traded to the Phoenix Suns, and after playing only 46 games with the team, he was traded again to the Boston Celtics. He made an immediate impact to the team and finished the season averaging 19 points per game, while coming off the bench. For his stellar off-the-bench play for both the Suns and the Celtics, Thomas finished 2nd in the Sixth Man of the Year voting.
During the 2015-16 season, he started 79 out of the 81 games he played for the Celtics, averaging 22.2 point per game. He was also selected to his first All Star Game, becoming the lowest draft pick since 1989 to achieve that status.
For the 2016-17 season, he took his game to another level. He started all 76 games that he played and averaged an astounding 28.9 points per game for the season. He also became only the sixth Celtic ever to score over 2,000 points in a single season. He was selected to his second All Star game and he entered the playoffs on a high.
However, tragedy struck during the 1st round of the playoffs against the Chicago Bulls. Thomas’ sister, Chyna died in a car accident and he played through the games in a haze. Upon beating the Bulls 4-2, he went to attend his sister’s funeral. He did return in time for Game 1 of the Eastern Conference Semi-finals against the Wizards. In game 2, he scored 53 points, becoming only the fifth Celtic to score over 50 in the postseason. His stellar play took the Celtics to the Conference Finals where Thomas was ruled out with a hip injury after 2 games.
That’s when things started going downhill. During the off-season, he was traded to the Cavaliers. By the time he returned from his hip injury, he had lost his quickness and speed. On top of that, he wasn’t even liked in the locker room. After only 15 games with the Cavs, he was traded to the Lakers where he played 17 games before hip surgery ended his season.
He has now signed for the veteran’s minimum with the Denver Nuggets. A far cry from a little more than 365 days ago, when he was on the road to signing a Max Contract. He played through personal tragedy and injury for the Celtics, and they traded him away. So the next time you feel like criticising an NBA player for choosing money over team, don’t.

Impact Of GST On various sectors