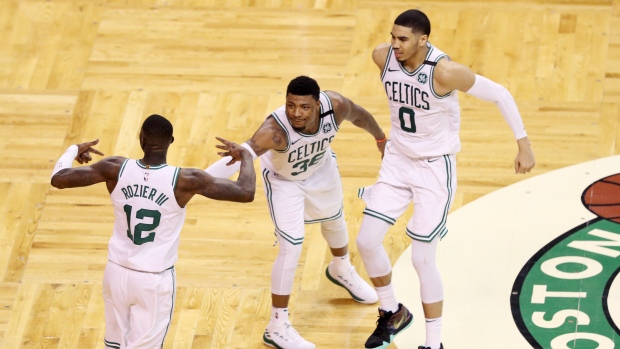 The 2018 NBA off-season has been one of the most exciting off seasons in recent memory. Some landscape changing moves were made alongwith some logic-defying ones. The whole world watched with baited breath as the best player in the NBA, LeBron James made his (third) ‘Decision’. The Kawhi Leonard – San Antonio Spurs relationship turned more rancid as time passed and he was eventually traded to the Toronto Raptors. Perhaps the biggest shocker of them all, was DeMarcus Cousins, arguably the best big man in the league, signing with the mighty Golden State Warriors. Things have become a lot calmer now, which means it’s a great time to analyse which all teams have succeeded in forming their desirable rosters so far. Lakers fans be warned, even though the team managed to sign LeBron James, the roster isn’t really competitive enough to take the team all the way or feature in this list. LeBron James’ teams work best when he is surrounded by shooters and the Lakers don’t really have many good ones. With that out of the way, let’s take a look at the teams which can enter the season with the most amount of confidence.
Golden State Warriors
No surprises here. The back-to-back NBA champions already featured four All Stars, Stephen Curry, Kevin Durant, Klay Thompson and Draymond Green in their starting lineup. However, their 2018 playoffs run showed a lack of shooting prowess outside of Curry, Thompson and Durant. In the pacing-and-spacing, make-or-miss league, it was important for the Warriors to fix this problem as an injury to one of the stars coul easily derail their season.
Surprisingly, the signing of big man DeMarcus Cousins also helps with the Warriors shooting. Before getting injured during the 2017-18 NBA season, Cousins attempted 6.1 three point shots per game, making 35.4 percent of them. While that doesn’t look spectacular, it’s respectable enough to draw defensive attention. Among the other shooters, Jonas Jerebko shot 41.4 percent from long range during last season. The addition of the amazing G-league shooter Danuel House and University of Cincinnati sharpshooter Jacob Evans will bolster the Warriors shooting even further.

Indiana Pacers
While the entire NBA is convinced that the battle for the Eastern Conference crown will feature a three horse race between the Boston Celtics, the Philadelphia 76ers and the Toronto Raptors, the Indiana Pacers can sneak into the conversation as the dark horse as the season progresses. Led by 2017-2018 NBA Most Improved Player, Victor Oladipo, the Pacers roster is very deep and devoid of any glaring flaws. As per Rotoworld, this is their projected depth chart:

It is evident that the roster might not have glittering superstar talent, but it’s stuffed with solid professionals. The team goes at least two deep at every position. The Pacers have scorers, great defenders and sharpshooters galore. As far as balanced teams go in the NBA, the Indiana Pacers are a prime example.

Boston Celtics
During the 2017-18 NBA season, the Boston Celtics didn’t really have the best luck when it came to injury. They lost star forward Gordon Hayward to a horrific ankle injury during the very first game of the season. They lost superstar point guard Kyrie Irving to knee injury later in the season as well. The team was struggling offensively after the All Star game, scoring only 107.4 points per 100 possessions, a dreadful 16th in the league. However, their defence was so stellar that they only allowed 103.3 points per 100 possessions, 7th best in the league. They rode their stellar defence and overall positive net rating deep into the playoffs, falling in Game 7 of the Eastern Conference Finals to LeBron James and the Cleveland Cavaliers.
The young core of the Boston Celtics has more experience under its belt now. Re-signing Marcus Smart and Aron Baynes will ensure that their suffocationg defence doesn’t lose its teeth. The offensive shortcomings of last season will be rectified by the return of Kyrie Irving and Gordon Hayward. The Boston Celtics have one of the deepest and most talented rosters in the NBA. Barring injuries or an inexplicable drop in the level of play, the Celtics are poised to make yet another deep playoff run. As if all the talent weren’t enough, the Celtics are also coached by basketball genius Brad Stevens. The other teams better bring their ‘A game’ when they face the Celtics.
Toronto Raptors
The Toronto Raptors traded away franchise darling DeMar DeRozan during this off-season. However, in his place, they received one of the league’s top 5 players, Kawhi Leonard. They even signed Greg Monroe to serve as backup to starting center Jonas Valanciunas. The Toronto Raptors feature one of the most formidable starting lineups in the NBA. Good luck matching up to Kyle Lowry, Danny Green, Kawhi Leonard, Serge Ibaka and Jonas Valanciunas. This line-up has the ability to dominate on both ends of the floor.
With Greg Monroe, Pascal Siakam, OG Anunoby, Delon Wright, Fred VanVleet and CJ Miles coming off the bench, expect the Raptors second unit to be the most productive in this season as well. With perennial nemesis LeBron James now in the Western Conference, this might just be the year that the Toronto Raptors finally make the NBA Finals.

Yes, the Atlanta Hawks are not a playoff team in anyone’s eyes. So, if the criteria to appear in this list were only centred on post season success, the Hawks wouldn’t even sniff this list. They are far from flawless, they are more likely to be competing for the top pick in the 2019 NBA Draft, rather than a top seed in the 2019 NBA Playoffs. And that’s the reason why their offseason moves, are perfect. The team is engaged in a total re-build and they are following the model of the Golden State Warriors by loading all lineup spots with shooters.
The Atlanta Hawks already have many of the re-building blocks in Trae Young, Kevin Huerter, Taurean Prince, John Collins and Omari Spellman. Dewayne Dedmon‘s extremely reasonable deal provides more floor spacing at the center position. Veteran Jeremy Lin should be able to mentor the young players well, and after trading Dennis Schroder and waiving Carmelo Anthony, the Hawks roster looks set to compete for the number 1 pick in the 2019 NBA Draft.