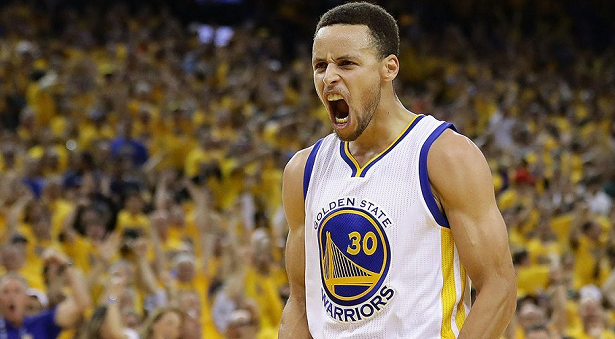 Stephen Curry is one of the five greatest players in today’s NBA and possibly one of the thirty greatest NBA players of all time. He is definitely the greatest shooter in NBA history. His seemingly limitless range and the uncanny ability to take (and make) a three pointer from any angle and any situation has made his domination of the league very unique. Nobody can suck the wind out of the opposition like Stephen Curry. His famous game winner against the Oklahoma City Thunder from about 40 feet will go down in history as one of the greatest clutch shots ever made. He won back to back MVPs (the second one being the only unanimous MVP in NBA history) and is a three time NBA champion. His jersey also happens to be the highest selling jersey on the NBA Store website. His daughter Riley Curry has also won hearts all over the globe with her cute behaviour while accompanying her father to his post game news conferences.

Stephen Curry seems to be on top of his game, and on top of the world right now. However, his journey to the top hasn’t been without roadblocks. He is the son of former NBA sharpshooter Dell Curry and former NCAA volleyball player Sonya Curry. One might expect him to be a gifted athlete based on his parents, however, his athleticism is probably the weakest part of his game. Stephen Curry mainly grew up in Charlotte, North Carolina. He led the Charlotte Christian School to three conference titles and three state playoff appearances. After high school, he was only a 3 star recruit. He wanted to attend his parents’ alma-mater Virginia Tech. However, because of his lean, 160 pounds frame, he was only offered a walk-on spot. So he chose to attend Davidson College, a school which had aggressively recruited him since his sophomore year in high school.
Stephen Curry had a horrendous debut game for the Davidson Wildcats. While playing against Eastern Michigan, he scored 15 points, but committed 13 turnovers. He recovered from that brilliantly with a 32 points, 9 rebounds and 4 assists performance in his second game. He went on to have a stellar season during which he was second in scoring among all freshmen, behind Kevin Durant of the University of Texas. He also broke the Davidson College freshman scoring record and the NCAA record for the most three pointers made by a freshman.

He returned to Davidson for his Junior year and averaged 28.6 points, 5.6 assists and 2.5 steals. During the season, he also became the all time leading scorer for the Davidson Wildcats. He decided to forego his senior season and declared for the 2009 NBA Draft. Before the draft, famous sports analyst Skip Bayless insisted that Curry was the best player of the draft class and he should be selected first. However, his point of view wasn’t shared by many NBA teams and Blake Griffin from the University of Oklahoma was selected number 1 overall and Curry slid to number 7, where he was selected by the Golden State Warriors
He had a stellar rookie season with the Warriors, averaging 17.5 points, 5.9 assists and 1.9 steals per game. He finished second in the Rookie of the Year voting behind Tyreke Evans. During the four years of his rookie contract worth $12.7 million, he played well, but was plagued with a nagging ankle injury. That ankle injury resulted in him signing a very cheap, 4 year, $44 million dollar contract upon the completion of his rookie contract.

That contract turned out to be one the biggest reasons behind the Warriors rise to power in the NBA. With their best player earning role player money, the Warriors had enough cap flexibility to form a great team which could dominate the league for years to come. They won the 2015 NBA Championship and then won an all time high 73 games during the next season. After the heartbreaking loss to LeBron James and the Cleveland Cavaliers in the 2016 NBA Finals, the Golden State Warriors went on to sign Kevin Durant in the offseason.
Ever since Durant’s arrival, the Golden State Warriors have been absolutely unstoppable. They have supremely talented superstars who are also unselfishly dialled in with the team’s ball movement philosophy. With the acquisition of All Star DeMarcus Cousins this off season, the domination of the Warriors looks all set to continue in the future. And their most beloved superstar isn’t planning to leave the team anytime soon.
Here’s what Stephen Curry had to say when asked if he wants to finish his career with the Golden State Warriors: “For sure I do. This is home. This is where I want to be, for obvious reasons. I love the Bay Area, man, the only reason I go home now [to Charlotte] is if my sister’s getting married or to go play the Hornets for that one game, so I haven’t really been back much. I haven’t put my mind there.
You never know what it will take to keep your career going, but I think I can figure it out.
There’s a lot more elements to it and there’s a lot more strategy that goes into it. My body is responding amazing right now. … I can see just how much goes into just being ready to play, and then [during] the summers you gotta lay that foundation.”

Priyanka Chopra and Nick Jonas first picture from there Roka

Good post! We will be linking to this great post on our site.
Keep up the great writing.