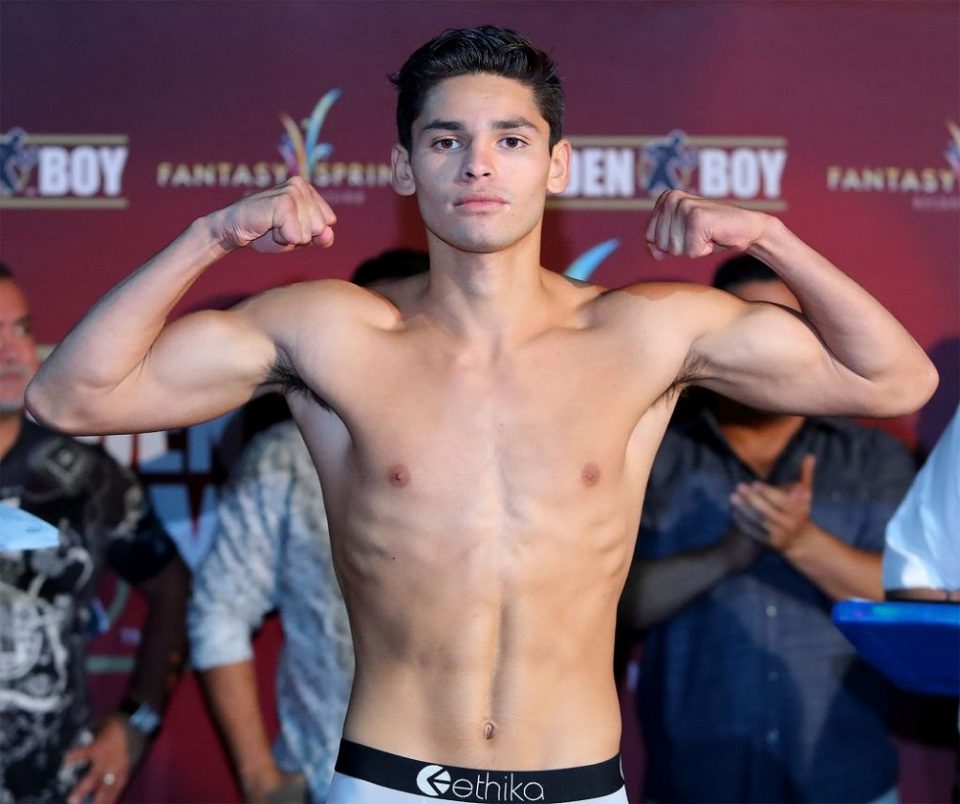 Ryan Garcia is one of boxing’s youngest and brightest stars today. He is the holder of WBC’s Silver Lightweight title since 2019. The Ring magazine has ranked him as the world’s fifth best active lightweight boxer. He is in the top ten of the rankings issued by the Transnational Boxing Rankings Board and BoxRec. Ryan Garcia is managed by Oscar De La Hoya’s Golden Boy Promotions. Ryan Garcia, who holds a formidable 20-0 (with 17 wins coming by knockout) record so far in his pro career, is very popular on social media. He has over 6 million followers on Instagram and he engages very actively with all his fans. Last year, Ryan Garcia was scheduled to fight Avery Sparrow in the co-main event of the Jaime Munguia-Patrick Allotey card in Carson, California on September 14th. However, the fight was scrapped as Sparrow was arrested before the weigh-ins on an outstanding warrant because of a gun charge in Philadelphia. Golden Boy Promotions attempted to keep Garcia on the card and have him face Duno on 24 hours’ notice.

Ryan Garcia: All You Need to Know

Who is Ryan Garcia?

Ryan Garcia is a superstar lightweight professional boxer who is the current holder of the WBC Silver Lightweight Championship. As an amateur boxer, Ryan Garcia is a 15 time National Champion. He also won a silver medal during the National Junior Olympics in 2014. Ryan Garcia was also cast in the leading role for the web series Brat in 2019. He is very famous for knocking out Mexico’s Miguel Carrizoza within 30 seconds in 2017. He is managed by GoldenBoy Promotions and he has also been a sponsored athlete for Gymshark. He has also worked as a model for Abercrombie & Fitch. Ryan Garcia is known for his social media presence. He has over 6 million Instagram followers, which is more than Deontay Wilder, Tyson Fury and his own promoter at Golden Boy Promotions, Oscar De La Hoya. Garcia also has more than 350k followers on Twitter.

How old is Ryan Garcia?

Ryan Garcia was born on August 8th, 1988 in Victorville, California. That makes him 21 years old at the time of the publication of this post. He is one of the brightest young stars in boxing today. Ryan Garcia’s father’s name is Henry Garcia and his mother’s name is Lisa Garcia. His parents have been actively involved with his career since the time he was an amateur boxer. His father has continued to be one of his assistant trainers till this day while his mother works as his Personal Administrative Assistant for all commercial and business endeavours.

What is Ryan Garcia’s nationality?

While Ryan Garcia is American by nationality, he does take his Mexican heritage very seriously. He usually walks into his fights while carrying both the American and Mexican flags. He also wears red, white and blue outfits during his fights.

How many siblings does Ryan Garcia have?

Ryan Garcia has four siblings, sisters Kayla, Demi and Shasha, and brother Sean, who is also a professional boxer.

When did Ryan Garcia start boxing?

Ryan Garcia started boxing at the young age of seven inside his parents’ garage.

When did Ryan Garcia turn pro?

Ryan Garcia had his first ever professional bout on June 9th, 2016. His first outing was successful as he secured a first round TKO win over Edgar Meza.

What does the future hold for Ryan Garcia?

Ryan Garcia, a fast-rising athlete who is boxing for the Los Angeles-based Golden Boy Promotions fight firm, is competing in the absurdly-competitive lightweight division.

Backed by Oscar de la Hoya, himself once renowned for being a boxing phenom with fast hands, Garcia is unbeaten in 20 professional fights.

His last victory was so brutal he bounced his opponent’s head off the canvas with a left hook knockdown, prompting the industry to say: “A new star is born.”

What did Ryan Garcia say about Gervonta Davis?

There are many viable rivals in the 135-pound division for Garcia, as Vasyl Lomachenko (good luck trying to beat him), Teofimo Lopez, and Devin Haney all compete at that weight limit.

However, Garcia appears to have genuine animosity toward Floyd Mayweather’s protégé Gervonta Davis, a knockout puncher proving to be one of the sport’s bona fide ticket-sellers.

Beating Davis in style is the win that would catapult Garcia into Ali-like territory, the young fighter said recently.

“Once I beat Gervonta Davis like I’ve been calling it, that’s going to be like history repeats itself with Sonny Liston and Muhammad Ali,” Garcia told Fight Hype.

“He got his respect. He was a loudmouth. Once I beat Gervonta Davis’ ass, that’s when they’ll give me credit.”

Garcia and Davis are regarded as two rising stars who have the potential, as well as the representation, to potentially dominate the sport in the coming decade. And even though they cannot fight for months because of the coronavirus pandemic, they have been hyping a fight on Twitter.

Garcia said victory over Davis would be a stepping-stone to even bigger things, as he has his crosshairs on the entire weight class. “I’m a f*****g beast … I’m telling you,” he said.

“Once I beat Gervonta Davis’ ass … then I’m going to do it like Muhammad Ali and take it to a whole another level and start beating everyone’s ass.”

Garcia’s confidence appears to come from the physical differences between the two athletes. At 5-foot-10, Garcia is reasonably tall for the division, particularly compared to Davis, who measures up at 5-foot-5 — but is, as his nickname “Tank” suggests, is stockier.

“He’s a talented fighter, and he’s got okay skills,” Garcia said. “But there’s one thing that he wasn’t blessed with and that’s height.

Who is Ryan Garcia’s trainer?

Garcia is trained by Eddy Reynoso, who also serves as the co-trainer for Canelo Alvarez.

Garcia squared off against fellow lightweight superstar Devin Haney in the amateur division. Of the six times they faced each other, both Haney and Garcia emerged victorious on 3 occasions each.

Ryan Garcia is not married. He has a daughter from his previous relationship with Catherine Gamez. Garcia’s daughter Rylie was born on March 21st, 2019.

What is Ryan Garcia’s net worth?

Ryan Garcia signed a multiyear deal in September 2019 to remain with Golden Boy Promotions. Although the exact details of his contract were never disclosed for the public, Ryan Garcia took to his social media to proclaim that it was “one of the most lucrative boxing deals for a prospect in the history of the sport.” Ryan Garcia’s net worth as of 2020 is $10 million. He is the proud owner of an Audi RS7, among other cars. Outside of his income from boxing, Garcia has also earned money through his work with Abercrombie & Fitch.

How tall is Ryan Garcia?

Which division does Ryan Garcia fight in?

What is Ryan Garcia’s fighting stance?

What is Ryan Garcia’s pro record?

Ryan Garcia currently holds an undefeated 20-0 record in pro boxing. He has earned 7 of those wins by knockout.

Where does Ryan Garcia live?

While Ryan Garcia was born in Victorville, California, he currently resides in Los Angeles.

What are Ryan Garcia’s nicknames?

Ryan Garcia is known as The Flash and KingRy.

So that was a brief snapshot of the young, exciting and extremely accomplished career of lightweight fighter Ryan Garcia. He has already achieved quite a lot in the boxing ring and he is barely in his twenties. The future is really bright for this boxing superstar. When you combine Ryan Garcia’s in ring skills with his out of the ring promotional skills, he is all set to become one of the most popular athletes in the years to come. Here’s a video of his greatest hits in the boxing ring.

Different Types of Braids For You To Style Your Hair With