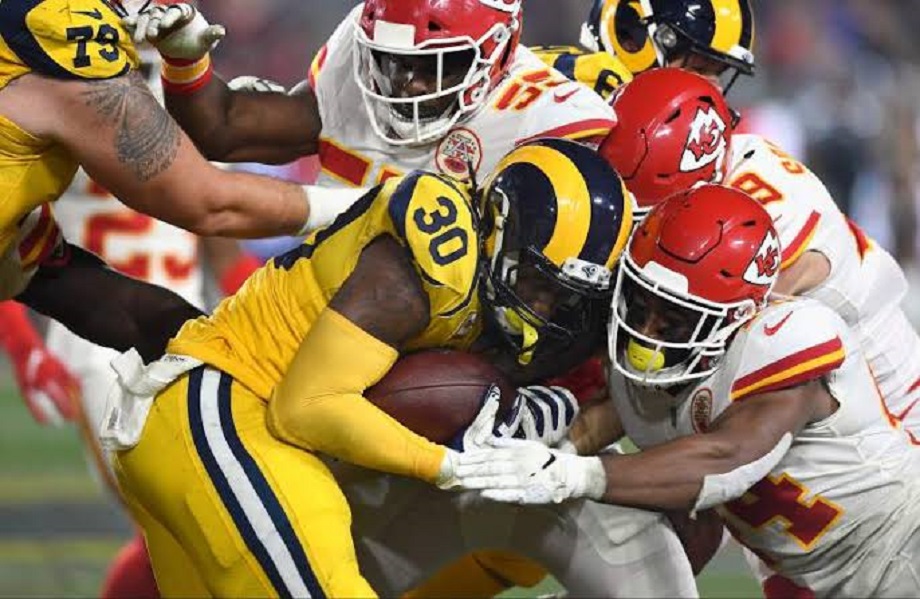 It was a clash of the titans. Two of the NFL’s best teams, the Kansas City Chiefs and the Los Angeles Rams locked horns in Los Angeles. Both teams had only lost one game so far in the season, streaking hotter than burning cinder blocks wrapped in barb wire. Everyone expected a barn burner and these amazing teams incinerated everything and blew the ash away as well. It wasn’t just any manic Monday, it was Manic Monday Night Football at its very best. And after all was said and done, the Los Angeles Rams won 54-51 and still stood with the New Orleans Saints as the only teams with one loss in this season. The Kansas City Chiefs tallied their second loss of the season but they fought till the very end and don’t need to hang their heads in shame. Here are some staggering numbers from this staggering game.

Total Yards — Both the teams posted an obscene amount of yards in this game. 1001 in total! The Rams, led by quarterback Jared Goff posted an astronomical 455 yards of offence. The Chiefs, led by cannon-armed quarterback Patrick Mahomes posted a ridiculous 546 total yards of offense. If that wasn’t shocking enough, the Chiefs’ cheetah, Tyreek Hill blazed through the LA Memorial Coliseum for 215 yards while catching 10 passes and scoring 2 touchdowns.

Total Points — The teams tallied a total of 105 points in the game. This is the highest total for any Monday Night Football game. It is also the third-highest in NFL history. Behind only the 113 points from the Washington Redskins‘ 72-41 victory over the New York Giants in 1966, and the 106 points from the Cincinnati Bengals’ 58-48 victory over the Cleveland Browns in 2004.

Touchdown Passes — Monday night’s game was the second time this season when Patrick Mahomes threw six touchdowns in a game. He joins the hallowed company of Y.A. Tittle (1962) and Ben Roethlisberger (2014) as the only quarterbacks to have thrown six touchdown passes twice in a season.

High Five  — The Rams vs Chiefs was only the fifth meeting (since 1970) of two teams with just one or fewer losses for the season during Week 11.


Fifty-Fifty — This 54-51 Monday Night marvel was the first game in NFL History where both teams scored more than 50 points.
Fast & Furious Fourth — As if the first three quarters weren’t exciting enough, the Chiefs set the field on fire by overturning a 10 point deficit into a 4 point lead within 4 minutes of fourth quarter action. The teams went back and forth with the Rams taking the fourth (and final) lead of the game on Goff’s 40 yard touchdown bomb to tight end Gerald Everett with 1:49 left in the game.
Forty Ain’t Enough — Earlier this season, the Chiefs lost 40-43 to the New England Patriots. After this 54-51 loss to the Rams, the Chiefs have joined the not-so-esteemed company of the 1966 New York Giants who lost back to back games despite scoring 40 or more points in each of those games.