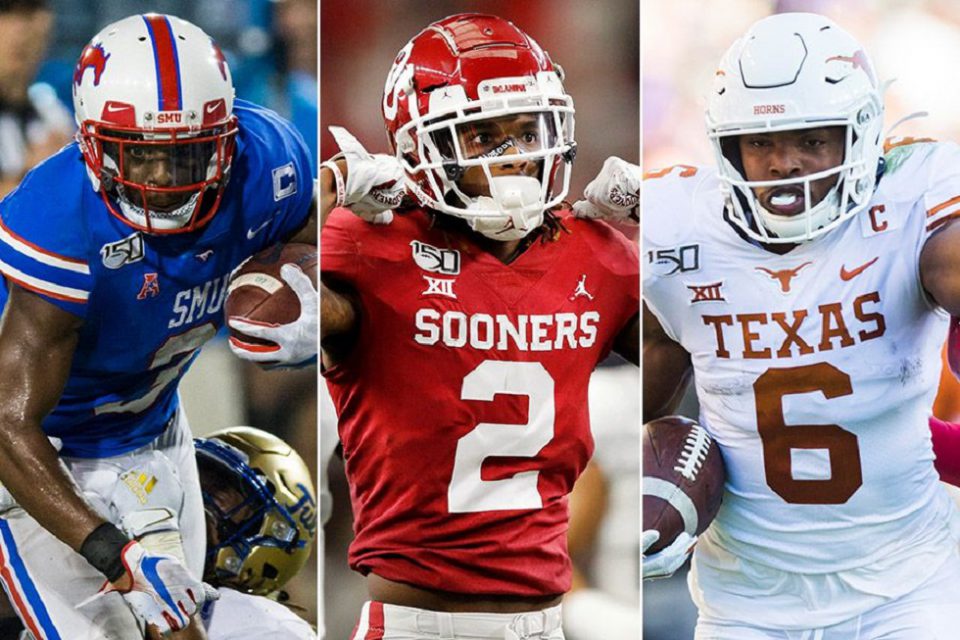 Despite plenty of hype, the majority of wide receivers who have been drafted over the last five years have largely failed to live up to expectations. In 2018, the first receiver off the board was the 24th overall pick with DJ Moore swapping Maryland for South Carolina. Following his first season in the NFL, he was named in the PFWA All-Rookie Team, although his 2019 performances were far less consistent.

Twelve months ago, Hollywood Brown was the highest-ranked wide receiver, helping to guide the Ravens to the playoffs for the second consecutive year. Despite his side’s divisional round loss to Tennessee, he caught the eye with seven catches for 126 yards, and at just 22-years old, he is still viewed as an exciting prospect.

However, this year’s batch of wideouts look particularly impressive, and any team who are hoping to strengthen in this area are likely to be spoilt for choice at the 2020 NFL Draft.

Jeudy has enjoyed a productive couple of years in Alabama with 145 catches for 2,478 yards and 24 touchdowns. His recent record speaks for itself and he’s a hugely exciting prospect. He is widely tipped to be first off the board, and is currently priced at 5/6 in Betfair’s odds on NFL Draft Specials to be the first wide receiver to be drafted this year. He takes everything in his stride and makes the game look easy. The 20-year old is expected to make the step up and should be a hit from day one.

"Jerry Jeudy, he's the most technically gifted WR I've seen in a long time. A college kid should not be able to run routes like this! His ability to separate and transition in and out of breaks…this kid is the real deal."

Regarded as one of the more productive wide receivers in the draft, the former Oklahoma man racked up 173 catches, 3,292 receiving yards as well as 32 touchdowns during his spell with the Sooners. Despite also being linked with the Eagles, Lamb has already held a virtual meeting with the 49ers.

Although they enjoyed a successful 2019, San Francisco need strengthening in several areas, so adding another impressive wideman to their roster could prove to be a savvy move. His intelligent play should easily help him make the step up and, despite his obvious lack of pace, his vision and handling should be enough to help him become a future star of the sport.

Whilst some of his fellow wide-men may lack a little pace, Ruggs is surely one of the fastest players in this year’s draft. His speed is likely to give opposing defenses a real headache and although his game is all about explosive pace, he also possesses the necessary power and strength to be a success in the NFL.

Ruggs has also been linked with the 49ers, who have 13th overall pick at this year’s draft, and his game-changing pace could help tip the balance in their favor this time around. He bullied some of college football’s quickest defensive backs last season and is rarely matched for speed.

Two weeks till the NFL Draft!

Some team will get a monster in Henry Ruggs III (Lee HS, Alabama)😤@__RUGGS #RollTide pic.twitter.com/NCDyleybH7

Although he may not be as mouth-watering a prospect as some of his fellow wide receivers in this year’s draft, the Clemson man is still likely to a first or second-round pick at the end of April. He completed a 40-yard dash in 4.58 seconds and caught 135 passes for 2,448 yards last season. With 27 touchdowns last year, he came agonizingly close to breaking the school record, and would be the ideal pickup for any side who are looking to add some versatility in this area of the field.

Top-quality wide receivers have been at a premium in recent years, however, 2020’s talented crop appear to have what it takes to thrive at the top level. Jerry Jeudy, CeeDee Lamb, Henry Ruggs III, and Tee Higgins are all hugely exciting prospects, and will be expected to hit the ground running when the season gets underway later this year.