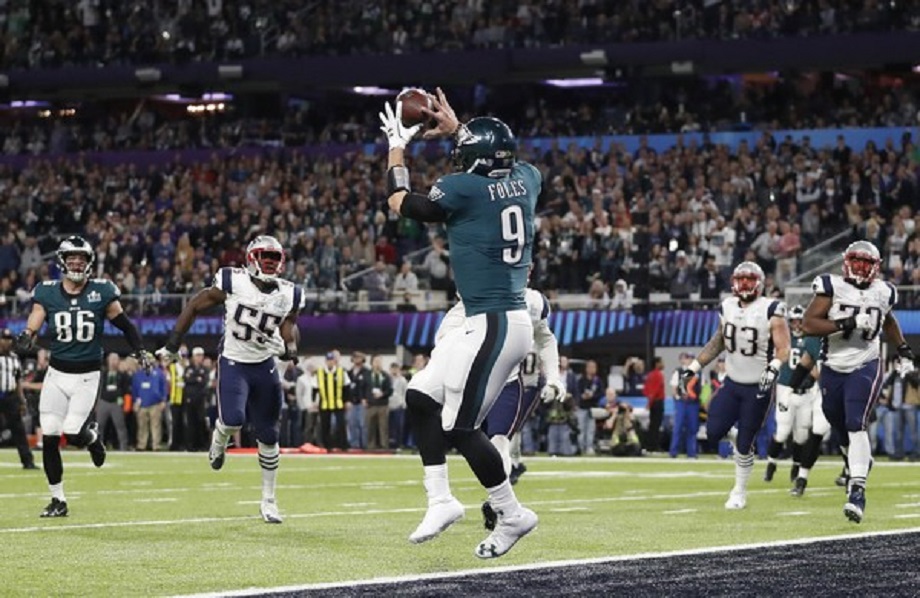 The Philly Special is one of the most majestic, beautiful and brilliant plays in NFL History. It has been immortalized on plaques, murals, t-shirts and tattoos. The most legendary instance of this play was in Super Bowl LII when the Philadelphia Eagles’ Trey Burton passed to Nick Foles for a touchdown on a 4th and Goal situation with 38 seconds left in the first half. That touchdown ended up being the difference in the game against the New England Patriots. Ironically, Patriots quarterback Tom Brady had dropped a pass from wide receiver Danny Amendola on a similar play a little earlier in the game.
If you’ve ever wondered about the origins and efficacy of this play, your curiosity is going to be satisfied today. Let’s start with the origins.
The Philly Special is usually attributed to Philadelphia Eagles head coach Doug Pederson. However, the play originated in the college football scene. In 2012, the University of Clemson ran a similar play where the quarterback Taj Boyd pretended to make adjustments at the line. The ball was then snapped to running back Andre Ellington who pitched it to wide receiver DeAndre Hopkins who threw it to quarterback Boyd for a successful 2 point conversion.  Four years later, the NFL’s Chicago Bears ran the same play to success in a division rivalry game against the Minnesota Vikings.
The Philly Special is remarkably similar to another play, the Philly Philly. However, there are certain differences between the two. Philly Philly was coincidentally the aforementioned failed play run by the Patriots in Super Bowl LII. It requires 11 personnel on the offence with one tight end and one running back in the shotgun formation. The quarterback hands off to the running back who appears to be running a sweep but he flips the ball to a wide receiver running across the formation while the quarterback slips out for a pass down the sideline. Oddly enough, the Patriots ran the authentic Philly Special in 2015 in a loss against the Eagles, and it worked for a massive 36 yards gain by Tom Brady. Pederson wasn’t the Eagles’ head coach at that point of time but he might have picked up the play from that 2015 game. Earlier during the 2018-2019 season against the Tennessee Titans, the Patriots ran the Philly Philly on  3rd and 7 and Tom Brady stumbled on his own feet and fell short of getting a first down.
One might wonder , why do teams keep running these supposed ‘trick plays’ even when so much footage on them exists? And how do these plays keep yielding results. The most important aspect of this play is deception. When you have quarterbacks like Nick Foles and Tom Brady on the field (both are not known for their running prowess), teams won’t expect them to run, let alone catch a pass. Defences will play differently to dual threat quarterbacks like Cam Newton, Marcus Mariota and Lamar Jackson, anticipating a run. This would greatly reduce of chance of the Philly Special’s success.
Once you have established a non assuming catching threat, the next step involves the signal caller (usually the quarterback) drifting to the edge of the offensive line, pretending to make some adjustments. Since most quarterbacks walk towards the offensive line quite often, the defence wouldn’t expect a trick play is most cases. Especially when it involves quarterbacks like Brady or Foles, who seem more susceptible to tripping over their own feet rather than run and make a successful catch.
After the ball is snapped to the running back, the offensive line starts blocking the defensive line to the left, forcing the line backers to move to that side of the field. In the mean time, the tight end and the quarterback, slip quietly to the right side  the field. The tight end then blocks the weak side line backer who is the only player in the way of the quarterback. The receiver on the right side runs towards the middle (a slant route) with a lot of contact, forcing the defensive back to clear the right side completely. The slot wide receiver runs a backup route to the middle just in case the quarterback is covered or even worse, trips on his own feet. Then, it’s just a matter of throwing a decent and catchable pass towards the quarterback who has hopefully not dipped his hands in a jar of butter just before the play.
So, you can see, the Philly Special isn’t just any trick play like the ‘flea flicker’ or the 2 yard wildcat style run. It’s an intricately designed play which meticulously covers all the possibilities during its occurrence, and barring the quarterbacks limbs being dysfunctional, usually yields successful results.